Survey data has shown manufacturers struggling at the start of 2019, with heavy users of aluminium having seen business conditions deteriorate markedly so far this year. The downturn in business activity has contributed to a drop in aluminium prices which, having settled during the first quarter, slipped by over $100/MT in April to a two-year low. Recent trade war escalations risk further volatility. As demand pares back and supply concerns ease, the danger of a further price fall in the second quarter has risen.

The IHS Markit Global Aluminium Users PMITM has remained in contraction territory for seven months now following the April data release. The headline PMI is a composite indicator giving an overview of operating conditions at manufacturers identified as heavy users of aluminium.

The downturn was initially driven largely by declining production at Asian users. Recently though, European users have also seen output fall, with the rate of deterioration outstripping that seen at Asian users over the past two months. Key to the recent fall in Europe was weak activity in the automotive sector alongside heightened Brexit uncertainty, according to comments from survey contributors. 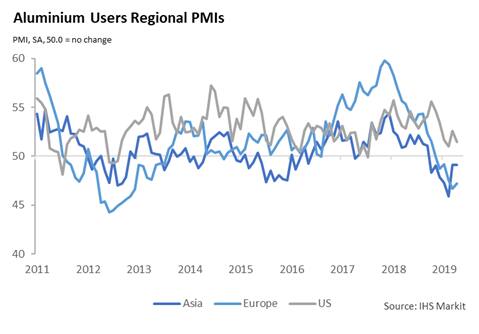 The aluminium sector decline has also reflected subdued trends in the wider global manufacturing economy. The JP Morgan Global Manufacturing PMI has recorded weakening growth over the last year, with recent data signalling near-stagnation. This has led to easing demand pressures on metals and subsequently caused aluminium prices to decline over the past month. 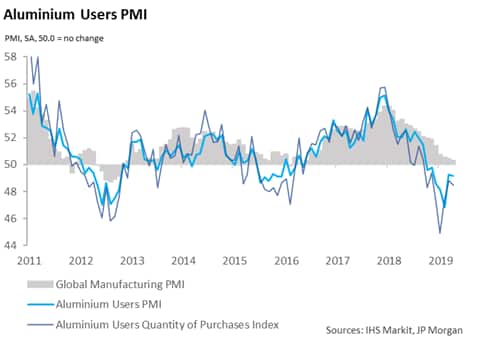 A second factor influencing prices is global supply. Survey data measuring the number of aluminium users stating supply issues showed a notable easing in recent months. Shortages were marked in the middle of 2018 in the wake of sanctions on Russian aluminium producer Rusal. However, these sanctions have since been lifted, helping aluminium supply to increase and prices to ease. 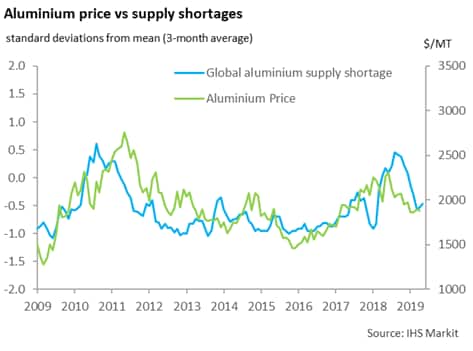 Both demand and supply factors appear to have contributed to an aluminium price slip in April. Moreover, there are clear reasons as to why this may continue over the second quarter.

First, there remains a lack of demand for the metal predicated by weak manufacturing sales. For instance, Chinese goods exports showed an unexpected 3% year-on-year dip in April. Similarly, aluminium users worldwide have reported falling demand in each of the past seven months.

Second, PMI data also suggest that aluminium producers still hold excess supply of inputs, despite reduced purchases. The new orders-inventory of purchases ratio, shown to have a strong relationship with pricing data, has fallen markedly, albeit recovering some ground in April. This suggests that businesses may look to pare back on aluminium purchases whilst they use up current stocks. As such, the series suggests that aluminium prices could fall even further during May and beyond. 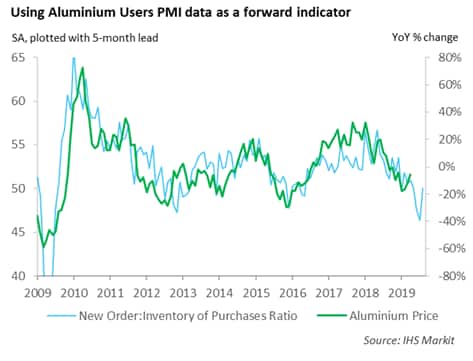 A third factor likely to push prices lower is the escalating trade war. On Friday, President Trump announced a hike on tariffs on $200bn worth of Chinese goods, including aluminium products. These tariffs have now risen to 25% from 10% implemented last year, and risk destabilising global trade once more.

Since the 10% tariff was applied, aluminium prices have suffered a solid declining trend, in line with a pattern of weakening global growth. Should China retaliate in the trade war, manufacturing demand could fall even further, adding downward pressure not only on aluminium but on a swathe of commodity prices.

Metal Users PMI data could offer the first sign as to how any tariff escalations will affect businesses over the coming months. Our next data release is on Friday 7th June.

The aluminium PMI data are derived from monthly information provided by around 1,500 aluminium users across the world.