Al-Shabaab militants from the jihadist group's Jaysh Ayman wing attacked the 'Camp Simba' airfield used by the Kenyan and US military in Kenya's Lamu county at around 5.30 am local time on 5 January 2020, using rocket-propelled grenades and small arms, and killing one US soldier and two US Department of Defense contractors. In the attack, a reported five militants were killed. US Africa Command stated that six civilian aircraft operated by military contractors were damaged during the attack.

The attack reflects Harakat al-Shabaab al-Mujahideen (Al-Shabaab)'s strategy of broadening its target set to include better-defended military targets, which, according to an IHS Markit source, has been supported by the Somalia-based jihadist group's leadership since early September. Al-Shabaab's leadership is very likely to be focusing on as priority targets military airfields and installations that operate fixed-wing aircraft, helicopters, and unmanned aerial vehicles (UAVs) used in reconnaissance and strike roles by forces fighting Al-Shabaab in Somalia. During 2019, the African Union Mission in Somalia (AMISOM) increasingly relied on UAVs targeting Al-Shabaab's senior leadership, which IHS Markit assesses to have informed the group's decision to broaden its target set. Likely a testament to this broadening of Al-Shabaab targets, on the same day as the attack on Camp Simba, Kenyan police arrested three people that attempted to force entry to the British Army Training Unit in Nanyuki, central Kenya, but were reportedly apprehended after being seen by surveillance cameras. There are no further details on these arrests. Kenyan police also arrested a man on 5 January suspected of conducting hostile reconnaissance on Moi Air Base in Eastleigh, Nairobi.

Al-Shabaab's claim of responsibility for the Camp Simba attack portrayed it as an important success, strongly indicating that the group's leadership will remain supportive of assaults against government-aligned military sites during early 2020. IHS Markit sources report that there is not consensus among Al-Shabaab's leadership on the advantages of this strategy, and that plans to attack hardened military targets such as military airfields were only agreed on in September 2019 after debate among the group's leadership, given that the strategy is very likely to incur greater costs in terms of casualties and materiel. This change in strategy was first demonstrated on 30 September 2019, when Al-Shabaab militants unsuccessfully attacked the US-operated Baledogle Military Airfield in Lower Shabelle region, Somalia, with vehicle-borne improvised explosive devices (VBIEDs) and a follow-up small-arms assault. The perimeter of the base was not breached; 10 militants were killed and all VBIEDs were destroyed by the security forces. The attack on Camp Simba was a comparative success because of the damage inflicted to US military personnel and contractors, and their aircraft. Regardless, Al-Shabaab's activity within southern Somalia in late 2019 indicated that it can offset the revenue shortfalls associated with this new strategy, which is vital for paying larger stipends to a greater number of fighters and purchasing materials to self-sufficiently construct high-explosive IEDs rather than relying on material captured from Somali or international forces. This indicates that Al-Shabaab will continue targeting hardened military targets in 2020, particularly Baledogle Military Airfield.

Al-Shabaab is also likely to continue planting landmines and pressure-plate-activated IEDs along main ground routes in southeastern Kenya, affecting public transport and security forces' convoys and patrols. The greatest attack risk is on the C112 road between Kiunga and Bargoni, as well as to buses, particularly on the C112 between Lamu and Garsen, which have been attacked, according to IHS Markit data, approximately twice annually for the past two years. Moreover, attacks on ground cargo are likely to increase once the Lamu Port container terminal begins operations, which is likely within the next three months, despite construction work having been suspended after the attack. 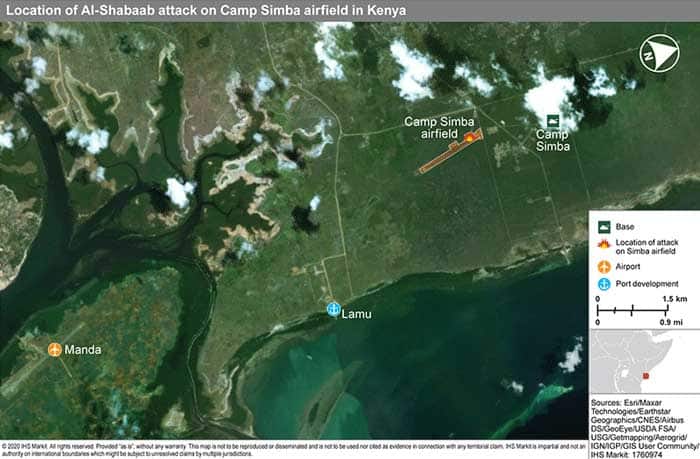 Increasing push factors are driving irregular #migration of Mexican nationals into the U.S. See what effects this m… https://t.co/8pBnUX0wLu

ICYMI: Here's the scoop on the dip in our Markit Materials Price Index: https://t.co/W3bZthG4V7 #commoditymarkets… https://t.co/WKv4elDvCz

Thanks for mentioning @SPGlobalPMI! Business Activity in US Falters as Inflationary Toll Mounts https://t.co/h45Jo2p430 via @markets