PMI surveys showed UK business activity growing at a sharply reduced rate in November amid slower inflows of new orders and a deterioration in business optimism about the year ahead. Intensifying Brexit uncertainty in particular continued to hit current business activity and dampen the outlook, making companies more risk averse in terms of spending and investment.

Businesses reported a further slowdown in activity midway through the fourth quarter. At 51.0, the IHS Markit/CIPS 'all-sector' PMI fell from 52.2 in October. With the exception of the brief downturn seen in July 2016, when business slumped in the immediate aftermath of the EU referendum, the latest reading was the lowest since February 2013. Historical comparisons indicate that the November PMI reading is indicative of the economy stalling, flatlining after a modest quarterly rate of GDP growth of 0.2% having been signalled in October. As such, the survey results suggest that the pace of economic growth has slowed to just 0.1% in the fourth quarter so far, down sharply from the 0.6% expansion recorded in the third quarter.

November's slowdown was led by a near-stalling of growth in the service sector, which reported the second-weakest monthly performance for six years. At current levels, the survey data indicate that the service sector will likely fail to contribute to economic growth in the fourth quarter or, if a further deterioration is seen in December, act as mild drag on GDP.

Slightly improved performances were recorded in both manufacturing and construction, though the former remained consistent with the goods-producing sector contracting slightly in the fourth quarter (despite signs of Brexit-related stock-building), leaving the sluggish construction sector as the main source of growth in the economy in the closing months of 2018. 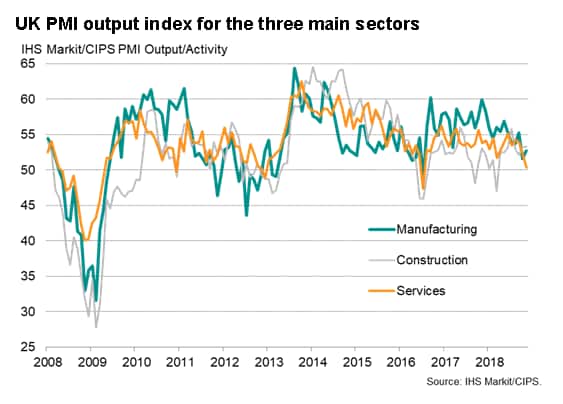 Forward-looking indicators also deteriorated. Growth of new business across the three main sectors of the economy hit the lowest since July 2016 and business expectations for the year ahead fell markedly for a second successive month. With the exceptions of July 2016 and the readings seen at the height of the global financial crisis, the latest business expectations index was the lowest in the history of the survey [*]. 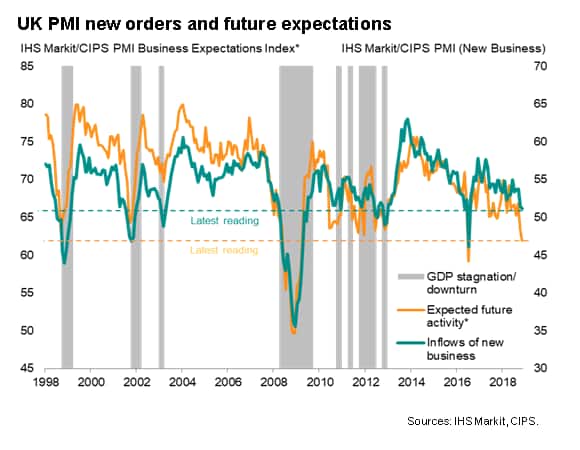 Both the slowdown in current business activity and the deterioration in business optimism were primarily caused by an intensification of anxieties over Brexit. Uncertainty in relation to the withdrawal agreement and the possibility of no deal was often reported to have caused companies and customers to cancel or postpone spending and investment decisions, with the exception of some evidence of stock-piling for certain goods as companies sought to safeguard against import disruptions in the event of a disorderly Brexit next year.

The survey also brought signs of excess capacity. In particular, the slackening of new order growth contributed to a steep drop in order book backlogs in November. The volume of uncompleted work fell for a second successive month, declining at the fastest rate since July 2016. The fall in outstanding work suggests that companies are, on average, operating with greater capacity than required to meet current demand growth. 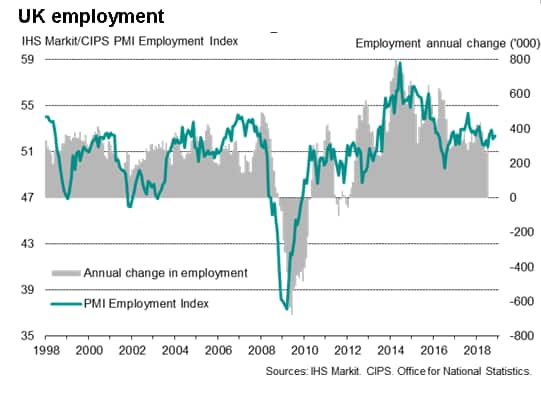 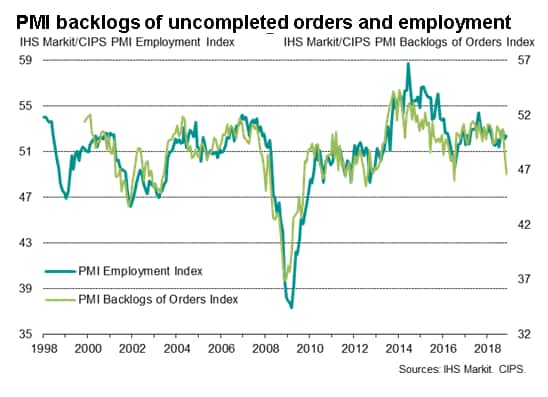 More encouragingly, in a sign that the slowdown could prove temporary, the November surveys indicated that employment grew at a slightly increased rate despite firms eating into order book backlogs.

This suggests that firms are hoarding labour in the expectation that sales will pick up again (presumably after Brexit uncertainties have lifted). That said, improved hiring in the manufacturing and construction sectors was partly offset by a further waning of job creation in the larger services economy, leaving the overall rise in employment subdued by standards seen earlier in the year.

Price pressures meanwhile cooled. Although the rate of input cost inflation remained elevated, often linked to higher wages and salaries, as well as increased commodity prices (in turn sometimes linked to import price rises due to the weaker exchange rate), the overall rise in costs was in fact the weakest for six months and one of the smallest recorded over the past two years.

The rate of increase of average selling prices for goods and services likewise moderated, running well below rates seen this time last year. 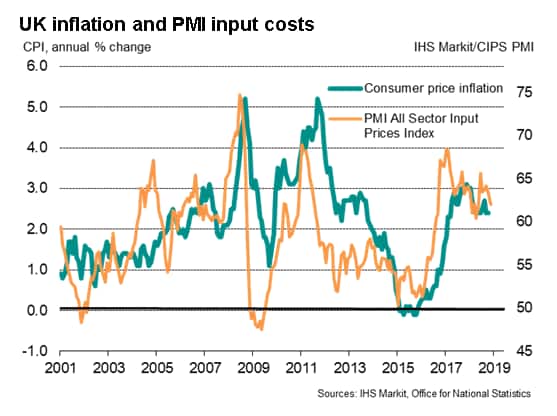 The survey therefore brings further evidence that Brexit-related worries are posing an increasing threat to the economy. Modest growth of just 0.1% looks likely in the fourth quarter, highlighting the very possible risk that the economy could fall into decline in early-2019 if business conditions deteriorate further.

The drop in the headline PMI also indicates a slowdown of the economy to an extent that would normally be associated with interest rates being cut. As such, the data will increasingly call into question the appropriateness of recent rate hikes at a time of intensifying economic uncertainty. However, the Bank of England views the current bout of weakness as temporary, reflecting increased risk aversion amid intensifying Brexit negotiations, and remains open to hiking rates at an increased rate in the event of a 'smooth' Brexit. 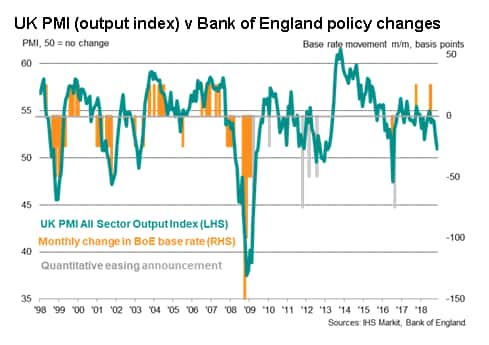