A decades-long drought in the Western United States reached new levels of severity in 2021, and current water metrics indicate the 22-year drought is still in full swing.

As a result, there is upside potential for an incremental 21% y/y of natural gas demand in California's power sector this summer as utilities work to replace the potential loss of power supply from hydroelectric generation.

Hydroelectric power generation has long played a sizeable role in the power markets of the Western United States, particularly in the Pacific Northwest and California. In 2021, hydroelectric generation averaged 53% of the Pacific Northwest's power fleet, 16% in California, and 3% in the Desert Southwest, according to IHS Markit analysis of monthly Energy Information Administration (EIA) data. Meanwhile the National Weather Service recorded the most severe year on record for the Desert Southwest and Pacific Northwest for drought, according to the service's Drought Severity Coverage Index.

A collection of events from last summer related to low water levels typified the drought's reach and based on current water metrics, conditions heading into this summer are ripe to repeat or possibly worsen.

Hydroelectric power generation at The Dalles Dam in Oregon (the second-largest generating dam in the state) averaged 701 MW in May 2021, down roughly 30% year on year (y/y), according to the US Army Corps of Engineers. Forward pricing in the power markets surged as a result.

In California, the enduring drought was typified by certain unprecedented events that are at risk of repeating in 2022. In Northern California, the Hyatt hydro-fueled power plant went offline from August 2021 to January 2022 owing to critically low water levels, below 900,000 acre-feet (ac-ft), at Lake Oroville in July 2021. The 30-year average for August 2021 water levels at Lake Oroville is 2,064,000 ac-ft.

To the southeast, the US Bureau of Reclamation (USBR) declared a first-of-its-kind water shortage at Lake Mead on the Colorado River in Nevada, which feeds the Hoover Dam hydroelectric power station. The 2,080 MW Hoover Dam power station powers homes and businesses in Nevada, Arizona, and Southern California, with the largest share of generated power allocated to California. The Hoover Dam electrical complex delivers power to Southern California using long-haul transmission lines.

Upstream of Lake Mead on the Colorado River lies Lake Powell in Utah, which dropped to record-low water elevation in March 2022, 1,075 meters, and spurred fears that the reservoir level could fall below what is required to generate power at the 1,320 MW Glen Canyon Powerplant—1,604 meters. 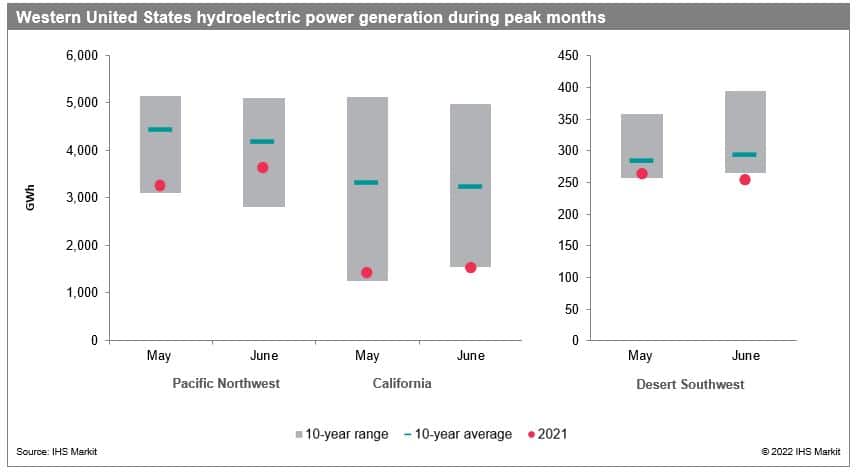 Looking forward, the continual demand growth for electrons and the worsening drought is likely to place added pressure on gas-fired power generators during key periods in some markets, even with added renewables penetration.

Another summer, another blow to California's power supply

Bleak water supply forecasts for key reservoirs set against the backdrop of hydroelectric generation's share of the overall power stack point to California as the sub-region most susceptible to potential gaps between supply and demand.

As of 12 April 2022, the snow water equivalent in the Northern Sierra and Trinity region of Northern California stood at 15% of what was considered normal for that date, limiting replenishment options for key reservoirs downstream such as Lake Oroville and Lake Shasta, affecting their corollary power plants.

The California Department of Water Resources reported the snow-water equivalent for the Central Sierra region at 26% of normal levels as of 12 April 2022. Southern California's water supply is particularly hamstrung by compounding drought conditions in the Desert Southwest that extend back to 2000 at least, when weekly government drought monitor records began.

Such drought conditions are expected to continue this year as of the latest seasonal outlook from the US Drought Monitor. As a result, the USBR projects Lake Mead elevation to decline to 1,049 ft by the end of 2022, falling below the second-level shortage condition benchmark of 1,050 ft and increasing the call for natural gas-fired power to help backfill the shortage.

Southern California Border pricing from May to August faces upside risk from potentially underwhelming runoff into the Colorado River, and the corollary rise in demand for gas-fired power.

Over the long term, declines in regional hydroelectric generation should increasingly be replaced by power generation from renewable energy sources, solar and wind in particular. But that eventuality depends on battery storage development and scale that is still some years away from undercutting the need for natural gas-fired power.

Interested in learning more about our trends coverage of North American natural gas market? Request a demo of PointLogic today on our Demo Hub, to see our real-time natural gas market monitoring, fundamentals data and short-term analysis for yourself.