Agriculture and biofuels - a transition in process

Biofuels - along with fertilizer, crop-protection chemicals, transportation, and packaging - is a major area of intersection between the agriculture and energy sectors. Over the past 15 years, biofuels demand rose (see Figure 1) and production increased globally, becoming a major part of the energy profile of developed and developing countries. Energy security, farm income support, and to a lesser extent environmental concerns were early pillars of biofuels policy. This focus led to policy development that emphasized mandated levels of biofuels into the fuel mix with capacity buildout often supported by tax and other government incentives. While ethanol benefited as an octane replacement and a focus on reduction of carbon dioxide levels, energy security and farm price support considerations have driven much of the volume increases in ethanol. 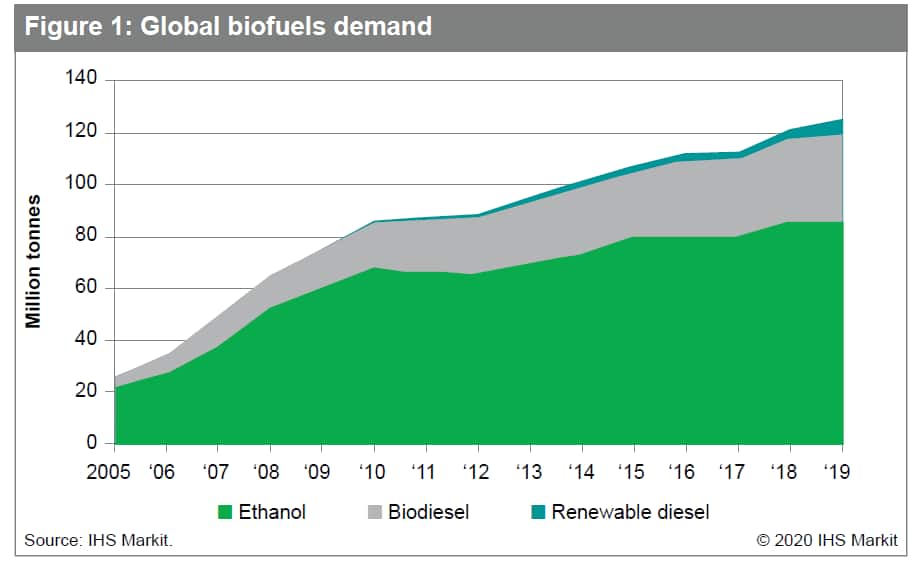 Biofuels as a "Bolt On" into Agriculture

Consistent with the themes of energy security and farm price support, most feedstocks currently used in biofuels production are traditional agricultural products, including crops such as corn, sugarcane, and palm and other vegetable oils. While the concept of advanced biofuels and "cellulosic" fuels were introduced in the US Renewable Fuel Standard (RFS) and Europe's Renewable Energy Directive (RED) in the early to mid-2000s, these fuels and the associated feedstocks have not met the volumes originally planned. This use of food crops already present in the agricultural economy helped accelerate the development of the biofuels industry, because it allowed new biofuels plants to "slip into" an existing stream of agricultural output. Essentially, all biofuels producers had to do was - in the case of US ethanol, find a surplus region of corn production and build an ethanol plant close to those supplies. For Brazil, in some ways it was even easier, as sugar-based ethanol plants were able to co-locate with sugar production. This gives these types of plants the ability to switch between sugar and ethanol production, based on whichever market offers the best price.

While the buildout of the ethanol industry around food-based agricultural output had the advantage of tapping into existing flows of feedstock, it did lead to "food versus fuel" debates. A few crisis-level episodes occurred where food price rises were seen as driven, at least in part, by feedstock demand from the biofuels sector. In fact, ethanol production accounts for almost 40% of today's corn usage in the US compared with about 12% just 15 years ago. Within agricultural economy sectors such as animal-feeding operations, grain processors, and vegetable oil, users have had to accommodate the increased feedstock usage of biofuels firms. The "food versus fuel" debate has subsided as agricultural supplies have grown and the price of agricultural commodities remained low for the past four years. Yet a resurgence of the "food versus fuel" debate is always possible as agricultural production is dependent on weather, policy changes, disease, and other factors that can limit supply and increase price. For now, biofuels are a critical component of demand for agriculture.

New Drivers of Demand for Agriculture From Biofuels

Currently the global biofuels industry sits at a critical crossroads. Efforts around sustainability and decarbonization have created an opportunity for the biofuels and agriculture sectors to play a critical role in lowering carbon dioxide levels from fuel consumption. As such, biofuels as a solution to developing renewable, sustainable, low-carbon sources of energy is a major theme in both commercial and policy organizations considering future biofuels development. The EU RED and California's Low Carbon Fuel Standard (LCFS) are policy initiatives that set a trend for other standards and plans (see Figure 2). These initiatives emphasized meeting specific carbon intensity (CI) levels in the biofuel feedstocks so consumers of these biofuels could release fewer carbon dioxide emissions into the atmosphere. As other states in the US and countries and regions in the world follow adopting LCFS initiatives, the demand for biofuels that meet these standards, and the agricultural feedstocks that support the biofuels production, will grow. 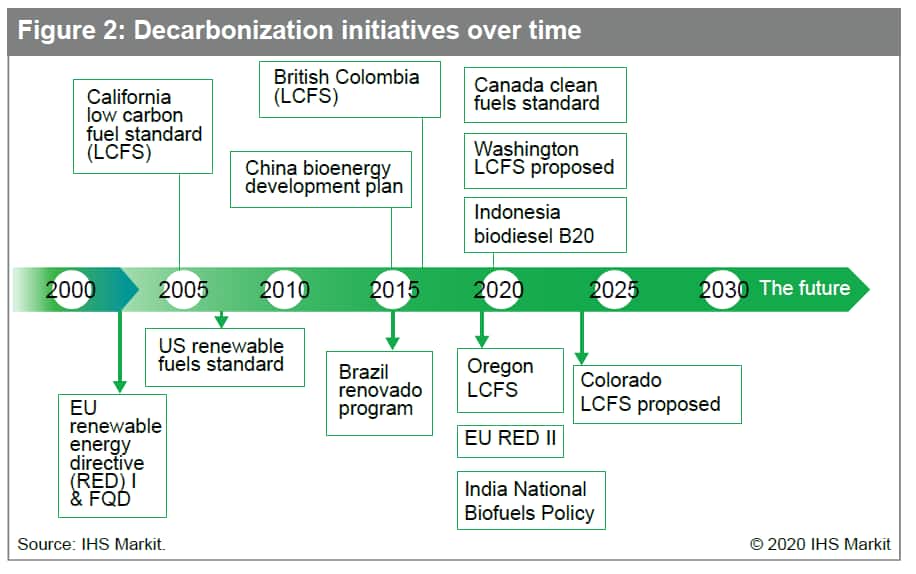 While the shift toward decarbonization represents a tremendous opportunity for the agriculture and biofuels sectors, there are challenges as well. The existing stream of conventional agricultural feedstocks are not necessarily what is needed to meet many of the low carbon fuel standards. New biofuels plant capacity will likely focus on sourcing renewable feedstocks with lower CIs relative to conventional feedstocks (e.g., corn, vegetable oils) to meet CI

targets set out in the LCFS policies; these low carbon feedstocks are often referred as "advanced" or "second generation" feedstocks. Alternatively, or in addition to new advanced feedstocks, applying new technologies such as plant genetics, precision farming, digital

farming and innovative processing technologies to conventional crops will lower the CI of conventional feedstocks as well.

Examples of advanced feedstocks are byproducts from various industries, including used cooking oil (UCO), animal fats and grease, distillers' corn oil, field waste, straw, wood chips, or energy crops (crops specifically cultivated for biofuels) such as switchgrass,algae, or wood chips/trimmings from eucalyptus trees. Because these feedstocks come from waste streams or are cultivated in a way that actually increases factors such as soil health and environmental

sustainability, they have a lower CI score and can be used as feedstocks for biofuels production while meeting LCF standards.

The Challenge and the Solutions

Globally there is a pool of byproduct feedstocks that began the shift from other uses to biofuels over the past five years. However, the supply of these feedstocks is inelastic to biofuel demand - that is, low carbon biofuel demand will not drive beef tallow production, a byproduct of the beef packing industry. Hence, at some point increased low-carbon biofuel demand will incentivize higher production of energy feedstocks or innovation to extract or collect a greater volume of waste streams from new sources (such as used cooking oil collection from residential use or from municipal wastewater).

The technology needed to utilize these next-generation feedstocks either already exists or is in development,with ongoing research and investment that will create pathways to fuel production from these streams. Less apparent is the supply chain for these feedstocks into new and existing biofuels plants.

Unlike conventional agricultural feedstocks - where the supply-demand dynamics and price formation are well understood and regularly tracked - data and information around next-generation feedstocks is just developing. Fortunately, the IHS Markit position in

both the energy and agricultural sectors gives us the opportunity to work with participants in both sectors, as we jointly develop with our industry, policy, and NGO partners the data and information systems needed to support the advancement of next-generation biofuels.

Uncertainties facing the energy transition in 2020

The #supplychain crisis is the first major disjunction of its kind to the global system in 30 years & @IHSMarkit ex… https://t.co/rD6fPOLddR

New @IHSMarkit analysis: Why a ban on US #LNG exports would risk higher prices for domestic consumers, be detriment… https://t.co/UJSIRMTDRx