Using our trade data to establish how new cases of African Swine Fever in Germany may affect trade.

African Swine Fever is a virus that causes a haemorrhagic disease in pigs that is highly tenacious and fast spreading. Despite it not being an issue for humans who consume the pork, the high fatality rate and the need to cull huge numbers of swine to prevent the virus spread means vast consequences for the pork industry (i). The virus first began to spread in a big way when it was discovered in China in the summer of 2018. Since then it has spread through China, into Asia and now into Europe. Most recently was the confirmation of African Swine Fever (ASF) in Germany on 10 September 2020.(ii) As German authorities battle to get the virus under control, the pork industry is trying to assess how this new development will affect the global trade landscape.

ASF has already significantly impacted the global trade of swine. China is a giant in the pork industry with pork being the countries primary animal protein and over half the world's supply of pigs being raised in China. ASF has caused a severe deficit in pork supply in China which can't immediately be filled by any other country. Since the rise of ASF in China, Chinese imports of pork have rapidly increased as they seek to fill this deficit (Figure 1). China is now the largest importer of pork products globally, importing over 1,994 million tonnes in 2019. China is seen to be importing mainly from the US, Spain & Germany.

Germany are the third largest exporter of swine globally, with key trade partners being Italy, Poland and China. China's importance as a trade partner for German pork was clear in 2019 when the volume of German exports to China increased by 81% compared to 2018. This has continued in 2020 with the volume exported in the first half of 2020 increasing 110% compared to that exported in the first half of 2019, indicating a consistent and significant increase in trade between the pair.

African Swine Fever has also had an impact on the unit price of swine as China scrambles to import more pork, rapidly inflating the demand for swine. As seen below the unit price of swine exports from Germany to China shot up during 2019 with the year average unit price in 2019 being 26% higher than that of 2018. During 2020 the unit price for German exports has dropped back to around 2400 $/T however, this remains inflated from the low prices in 2018.

Germany is not the only option as a source of pork for China. Key trade partners include the US and Spain (Figure 1). The volume exported to China was highest from Spain followed by Germany and the US. However, the US showed the most significant increase in exports in 2019 compared to 2018 with a 184% increase. Looking at the other key sources of swine for China, all showed significant increases in unit price throughout 2019 (Figure 4). The unit prices were showing some return to lower levels however, the spread of ASF in Germany could cause further disruption to this recovery. 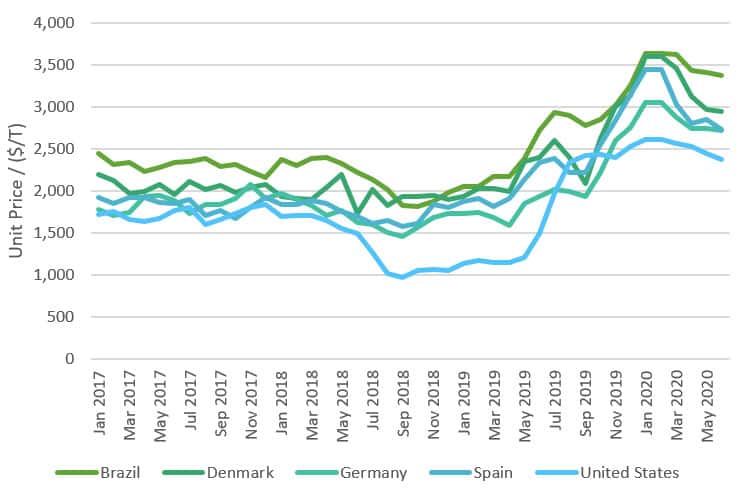 Given the appearance of ASF in Germany, German pork may soon not be an option for China. If German pork exports are reduced by ASF, the options for China are further reduced. A move towards importing more from Spain would lead to an increase in unit price compared to sourcing German pork, as would Denmark and Brazil. The US may be a promising option with a consistent lower unit price compared to other sources (Figure 4). However, given the ongoing fragility of relations between the US and China, choosing the US as a major supplier of pork may not be favoured by China. US pork has been hit by heavy tariffs during the US-China trade-war however, the phase 1 trade deal offered significant hope for the US pork industry. Among the deal struck in January was an agreement from China for the purchase of $200 billion worth of goods, of which 16% was pork (iii). If the emergence of ASF in Germany progresses, this could provide even further opportunity for the US with many US companies who could benefit. The top ten companies currently exporting pork to China are shown below. These companies already have established supply routes with China and so could seek to further expand this if Germany's swine industry is impacted.

The pork industry has been struggling with ASF for several years and it is likely to take many more years to eradicate. Hence, long-term and stable sources of pork are vital for China to ensure no long-term deficit's of pork. The obvious options include Spain and the US, however for China to fully cover its pork deficit it may be necessary for it to seek out smaller or less obvious supply options. Unit price, tariffs and supply routes are all things to be taken into consideration when identifying alternative sources.