Africa's upstream hydrocarbon sector is at a crucial turning point, with reserve additions from final investment decisions (FIDs) and project start-ups at their lowest levels in three decades. Whilst some of the delays are due to the COVID-19 pandemic they also reflect a longer term strategic refocus by international oil companies (IOCs) towards more agile and lower carbon production. Without action by African governments and NOCs to support upstream investment and maintain project start-ups and FIDs there is now a real risk of African oil production declining post-2030.

The significant decline in FID's and start-up delays over 2020 has been driven in part by the COVID-19 pandemic and resulting demand destruction, but also by the longer term strategic refocus of IOCs to reduce financial exposure to fossil fuels and increased focus on lower carbon developments. This longer term refocus is likely to increase the risk that higher cost, breakeven and/or carbon emitting projects may well be delayed or even stranded in favor of agile, advantaged, lower carbon barrels. With an increasingly limited pool of discoveries that meet IOCs' progressively stricter reserve development criteria there is a risk that African oil production could steadily decline into the 2030's and beyond, with significant negative implications for host governments and national oil companies (NOCs). 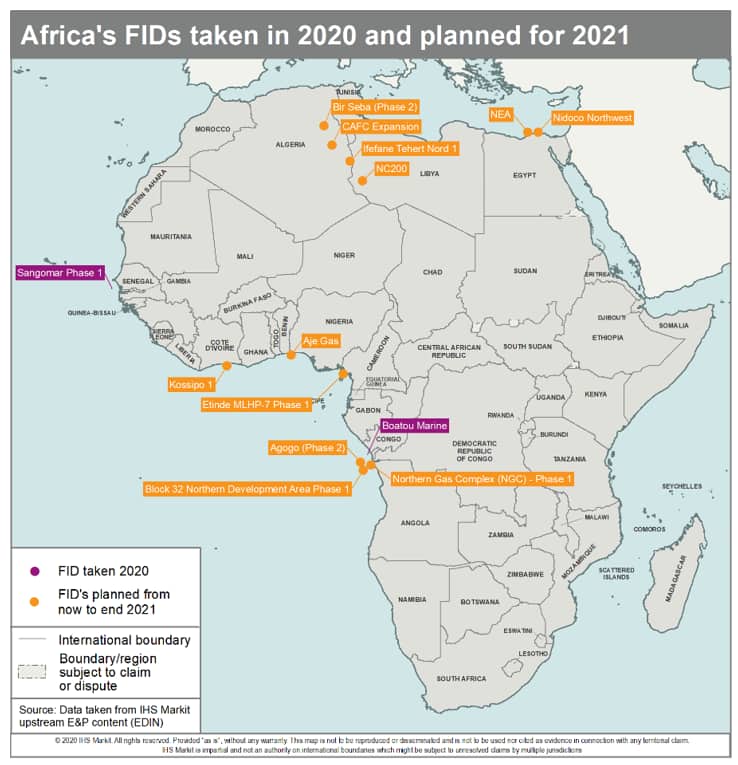 Africa has been particularly affected by the IOC capital refocus, as well as COVID-19 logistical difficulties, leading to only two FIDs taking place over 2020; Sangomar Phase 1, taken pre-pandemic in early 2020 followed by the much smaller Boatou Marine in Congo. A further FID is likely over 2020 at Nidoco Northwest in Egypt, but this is increasingly at risk. Even if this project FID goes ahead African reserve additions from FID's will fall to the lowest ever recorded level.

An FID for Northern Development Area Phase 1 in Block 32 was expected in 2020, however, appraisal operations were interrupted due to the COVID-19 pandemic. The final appraisal well on the Cominhos field was due to be completed in September 2020 but is now likely to commence in the second half of 2021. If this is delayed on FID could be delayed into 2022.

Agogo, which is operated by ENI Angola, was due to take FID in 2021. ENI currently report that they are in contact with relevant contractors with regards to the full field development and a 2021 FID for Agogo (Phase 2) is still likely. In Cameroon, Etinde was expected to be sanctioned in 2020 but partners, including the operator New Age, announced that an FID had been deferred to 2021 due to several factors including stakeholder consensus and the impact of the COVID-19 pandemic on the various workstreams both inside and outside of Cameroon.

As well as FID delays there has also been substantial project start-ups delays in 2020, due to both logistical difficulties created by the pandemic and the longer-term IOC strategic refocus. Almost 50% of reserve additions expected to start-up over 2020 have been delayed out, and not just by several years. Additionally the initiation of the OPEC+ production cuts introduced earlier this year to try and stabilize global oil prices may have also made IOC's ponder whether it was worth bringing a new development onstream this year as companies would not want to risk the economic and technical consequences of being told to cut back production.

Out of the 23 projects due to commission in 2020, 11 have already started up and one more could still commission before year end, though this is increasingly unlikely. Four projects, making up 400 MMboe of reserve additions, have been moved to a 2021 start-up; Nene Marine (Phase 2b) in Congo, CLOV (Phase 2) in Angola, Hassi Bir Rekaiz (Phase 1) in Algeria and Oryx in Chad. The COVID-19 pandemic was the main cause of these start-up delays. At Nene Marine (Phase 2b) development operations were interrupted, while at CLOV (Phase 2) drilling activity was suspended through the first half of the year as the pandemic spread.

A similar situation in 2021 is forecast now as was expected pre crisis but the project mix has changed as projects where delayed out from 2020 and 2021. In total six projects have been deferred to 2022 from 2021 including the ANOH Gas development in Nigeria, Masseko Marine 1 in Congo and Ruche (Dussafu) Phase 1 in Gabon.

Project delays are likely to limit any increase in production and lead to the lowest yearly reserve additions from start-ups since the early 1980's and around 50% lower than in the last downturn in 2015. In 2021 the situation is not expected to significantly improve as smaller tiebacks and phased developments continued to be prioritized.

The deferment of project sanctions and start-ups has reduced upstream capital investment flows into the continent, impacting not just 2020 but through into the early 2020's. The combined lost CAPEX through 2020 and 2021 is expected to total in excess of $20 billion. This rises to over $25 billion in 2022 reflecting delayed FID's and further project start-up delays. Large capital spending cuts have been announced this year including Total announcing a CAPEX cut of $3.3 Billion, and Shell a reduction of $5 Billion, further placing future projects at risk and extending the capital flight.

The African upstream oil industry is resilient as has been demonstrated over previous price downturns, but pressures on the industry are greater than ever - particularly limits on and the refocus of capital investments by IOCs and funders, and longer-term concerns about oil demand are all likely to impact near term start-ups and FIDs. Every project, no matter how advanced is likely to be re-evaluated on new tighter metrics and higher quality projects prioritized and divestments of non-core assets increased. Projects which have a break-even price (BEP) above $40 will struggle to be commercialized and there is an increased risk of those assets being stranded. For those projects with a sub-$40 BEP development is far from certain with short cycle projects in existing plays within tieback distances the most likely to be developed. Additionally, lower carbon projects such as LNG developments are likely to be prioritized, subject to global gas market conditions.

Now more than ever, the best projects will attract capital and it is no longer just about just having a low BEP, as 2020 has shown us. Reducing project risk is key, especially in Africa, as companies also already contend with significant above ground risk and fiscal and regulatory uncertainties. Fewer companies are seeking opportunities with less urgency and more choice and 2020 has shown quite starkly that African governments and NOCs must move quickly to encourage and support upstream investment or run the risk of production decline.

Rebekah Bostan is an associate director of technical research for upstream energy at IHS Markit.