The world is in an energy transition, we are told, moving inevitably to a low- or net-zero carbon future. After a century of dominance, fossil fuels are now being phased out, a process which will take only several decades. Consequently, investor preferences are changing. Many no longer support hydrocarbon projects, or at least they don't support projects that are not "agile"—in terms of time-to-develop—or "advantaged"-in terms of cost of development and carbon emissions. This means that frontier exploration--the riskiest of all exploration activities-is also losing steam. These days, only around a dozen companies are actively pursuing frontier exploration worldwide.

But while frontier exploration activity is decreasing globally, sub-Saharan Africa seems to be an exception, with several high impact frontier wells being drilled today in frontier areas. And companies have plans to do more in frontier basins across the region. In fact, sub-Saharan Africa's rig market—which is an important indicator of upstream activity—is improving. At the time of writing, three of the deepwater drillships under contract in west Africa were contracted for frontier exploration. One of these will even soon set the global deepwater record.

Frontier exploration is struggling. But so is, more broadly, the exploration business. In part, this is because exploration just hasn't been delivering the kind of returns that shareholders demand. But it also reflects an important shift taking place in the upstream sector, both in terms of company strategy as well industry structure. Last year, upstream explorers discovered the smallest amount of barrels worldwide since the 1950s while drilling the fewest number of wells in the last 15 years. On average, the upstream sector is drilling around 400 exploration wells annually. For this reason alone, that frontier exploration—a subset of exploration activity in general—has not produced stellar results is not a surprise.

Setting the stage for the shift in corporate behavior is the overall disappointing performance in the E&P sector and investor reaction to the energy transition. Back in 2009, upstream companies achieved a double-digit rate of return. Since then, however, returns dropped and until recently they produced on average single digit returns. So investors are voting with their pocketbooks, searching for upstream activities that will generate higher returns. The lower returns from exploration lead them to shy away from frontier exploration as well. While exploration activity does continue, investors tend to focus more on barrels that are "advantaged"—those that are lowest cost both in terms of their carbon footprint as well as proximity to markets.

In addition, a number of upstream companies are reinventing themselves in the face of the energy transition, turning from "oil" companies to "energy" companies. With this broader focus, these companies maintain a portfolio with upstream oil and gas assets, but they are also adding renewables—a sector with a utility-type business model and utility rates of return. Committed to staying in traditional E&P, these companies need to achieve higher rates of return than a utility might generate. To do this, they focus their exploration activities in basins that are proven, —where they are more likely to meet exploration success. Proven basins contain both "emerging" and "mature" basins, but may also contain frontier plays or new plays. The bulk of upstream dollars go to fund these activities, and consequently frontier basin activity only comprises about 10% of overall activity with respect to spend and success. These results represent a major shift from the past.

Going forward, however, we may yet see a shift back. There is a sentiment that we are in an energy crisis and the world is resource rich, a sense that we have a glut of resources. But it should be noted that this sentiment is not necessarily reflected in actual reserves, and in some parts of the world, we are "production poor." That is part of the reason for this energy crisis, which these days dominates news headlines. Should the industry then reconsider its approach? This question deserves more analysis.

Why does Africa have so much frontier exploration?

Africa is indeed seeing a flurry of exploration drilling some of the upcoming high-impact exploration is in frontier basins like the Zambezi Delta and other wells are in frontier plays within proven basins, like the Congo Fan. A good example for a well testing a frontier play within a more mature basin is the Ondjaba - 1 well, recently drilled by TotalEnergies offshore Angola at a world record water depth of 3,628 m. This well targeted a play that to-date was untested and is therefore considered a frontier play, though its basin is not frontier.

So why does Africa see so much frontier activity? A key reason is because the region still has the potential for major discoveries. Unlike most of the world, Africa hosts many frontier basins with a significant number of large untested prospects. And large discoveries tend to result in the production of barrels with lower costs per barrel and lower carbon intensity per barrel. Also, since frontier basins are often found in countries with limited or no upstream industry, they tend to have fiscal terms that are more attractive to investors—as government aim to build an upstream sector—than in countries with a mature upstream industry. Such terms ultimately lower the economic threshold investors must deliver to their shareholders for a discovery, a benefit which a large discovery only amplifies.

To be sure, some companies are pulling back from frontier exploration—BP and Kosmos are well known examples—and the overall size of the pool of explorers has decreased. But other companies are moving into the sector. Though these companies may not be operators, they do share in the risk and ultimately in the potential returns.

What kind of frontier exploration activity are we seeing in Sub-Saharan Africa?

The oil price crash of 2014-15—the first crash of two in less than a decade—was followed by a delayed recovery in exploration drilling in the region (exploration subsequently picked up until 2020 and a second crash hit). In the region, the recovery of exploration activity following a crash tends to be delayed primarily due to the fact that exploration in Sub-Saharan Africa generally occurs in the offshore and deepwater, and deepwater wells are more expensive than onshore wells. After the 2014-15 price crash, companies need time to redeploy capital to exploration in the deepwater. In addition, exploration drilling roughly tracks the oil price. So if oil prices remain around current levels, it is expected that drilling will continue apace.

Below is a list of eight high-impact wells that are being and expected to be drilled in the next few months: 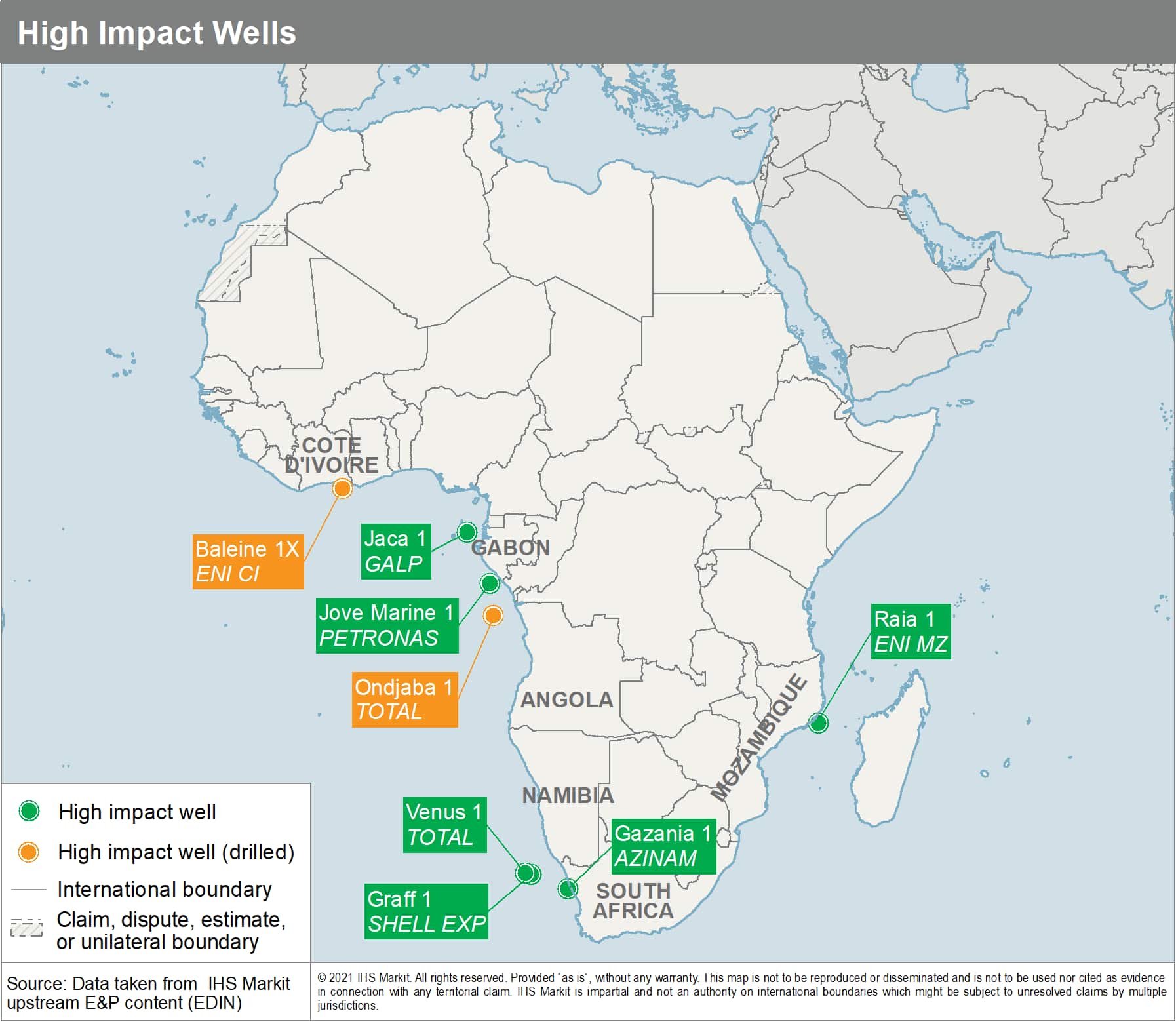 Which basins do explorers seem to be pursuing in Sub-Saharan Africa?

Context is important. The world has about 2,700 basins, of which only around 127 are considered favorable under IHSMarkit's criteria for choosing the top basins. Many of these basins are located in Africa and in particular sub Saharan Africa, both on- and off-shore. Africa still contains many untested Cretaceous turbidite plays which have led to large successes in offshore Ghana, Brazil , Guyana and MSGBC. However, the areas farther south, in Namibia, then around the Horn and going north through East Africa, have different geological characteristics. As such, they have not attracted the same attention as the plays in the West. There are a number of reasons for this, for example, corporate priorities, existing knowledge, and even the number of explorers willing to challenge conventional wisdom and develop new concepts to pursue. It remains to be seen, however, whether frontier basins like the Orange sub-basin, Natal Trough, Somalia, and Zambezi Delta will result in the mega-plays that were discovered in the Atlantic, such as in Guyana or MSGBC. In addition, in southern Africa, explorers have hunted for oil rather than gas, which is seen to be in over-supply. Sub Saharan Africa is sitting on over 130 TCF of gas which has yet to be developed after more than 10 years. So why explore for gas?

How is gas perceived by explorers?

Reflecting this, nearly all of the upcoming high-impact wells are targeting oil. But the big gas discoveries in Mozambique and Tanzania initially thought to be oil plays. Though one well to be drilled in Zimbabwe early next year onshore targets gas, all other high-impact wells mentioned above target oil. Will the oil predicted to be in East Africa's offshore finally be found?

Is the current round of drilling the beginning or end of frontier basin plays?

The results from the current drilling activity will constitute an important signpost as to whether the trend of drilling frontier wells will continue. Simply put, success attracts activity. If plays expected to deliver oil instead produce gas, or if the oil that is discovered is not commercial, most likely explorers will begin to look for new plays to pursue. That said, the large majors tend to have deeper pockets and greater resources with which to explore. So as long as a basin shows characteristics that are promising, these companies often have the ability to be more patient and continue exploring. Eni's success in the Cote d'Ivoire Basin is a good example

Where do you expect explorers will go next in SSA?

A transition to a #netzero emissions economy presents uncertainty for some sectors. Jenny Yang from our gas, power… https://t.co/43d1FE2YJr

The #energytransition is reshaping the future of #refining. What does it means to be a refiner in the present and f… https://t.co/VaVUm55ckD

What happens when $1 billion is spent within the #upstream E&P sector in #Africa? Join us as we take a look at what… https://t.co/UURKaGz6dc