This is the last in a series a three reports examining key conflicts in Africa in 2021. Previous reports have focused on Ethiopia and the Sahel.

The ongoing Islamist insurgency in Mozambique's Cabo Delgado province is likely to expand territorially in 2021, throughout the Cabo Delgado and Niassa provinces and to southern Tanzania, posing kidnapping, death and injury, extorsion, looting and business disruption risks to all sectors and cargo on land, and in particular to oil and gas, mining, hotels, NGOs and the catholic church, and security forces assets and staff. The likelihood of an effective government response in the next 12 months is very low.

In 2017, Tanzania cracked down on Jabha East Africa's jihadists near Tanga who fled into DRC and Northern Mozambique, constituting the roots of the insurgency which began in October 2017 with attacks on several police barracks in the Cabo Delgado province.

Throughout 2018, insurgents perpetuated attacks bearing the techniques, tactics and procedures of Islamic State affiliated groups, and reached villages located further south and west. They published a manifesto in July 2020 with the stated aim of establishing Sharia law.

In August 2020, the insurgents seized the Mocímboa da Praia port, city and the surrounding roads and have since been expanding this firm control southwards along towards Pemba and along the northern border with Tanzania, by beheading and kidnapping civilians by dozens.

They also started kidnapping and robbery at sea of small passengers' boats and small vessels carrying supplies sailing off the coast between Palma and Pemba. An uptake in maritime incidents in November led the government to restrict sea traffic and, in late December, to interrupt it, which prevented all commercial cargo to circulate, among which some meant to supply the LNG construction site.

On January 1, insurgents closed in on the areas surrounding the LNG onshore construction site, reaching it gates, which prompted Total to evacuate its staff and pause the project indefinitely. This will likely cause delays to at least a year with delays beyond that looking more and more likely. 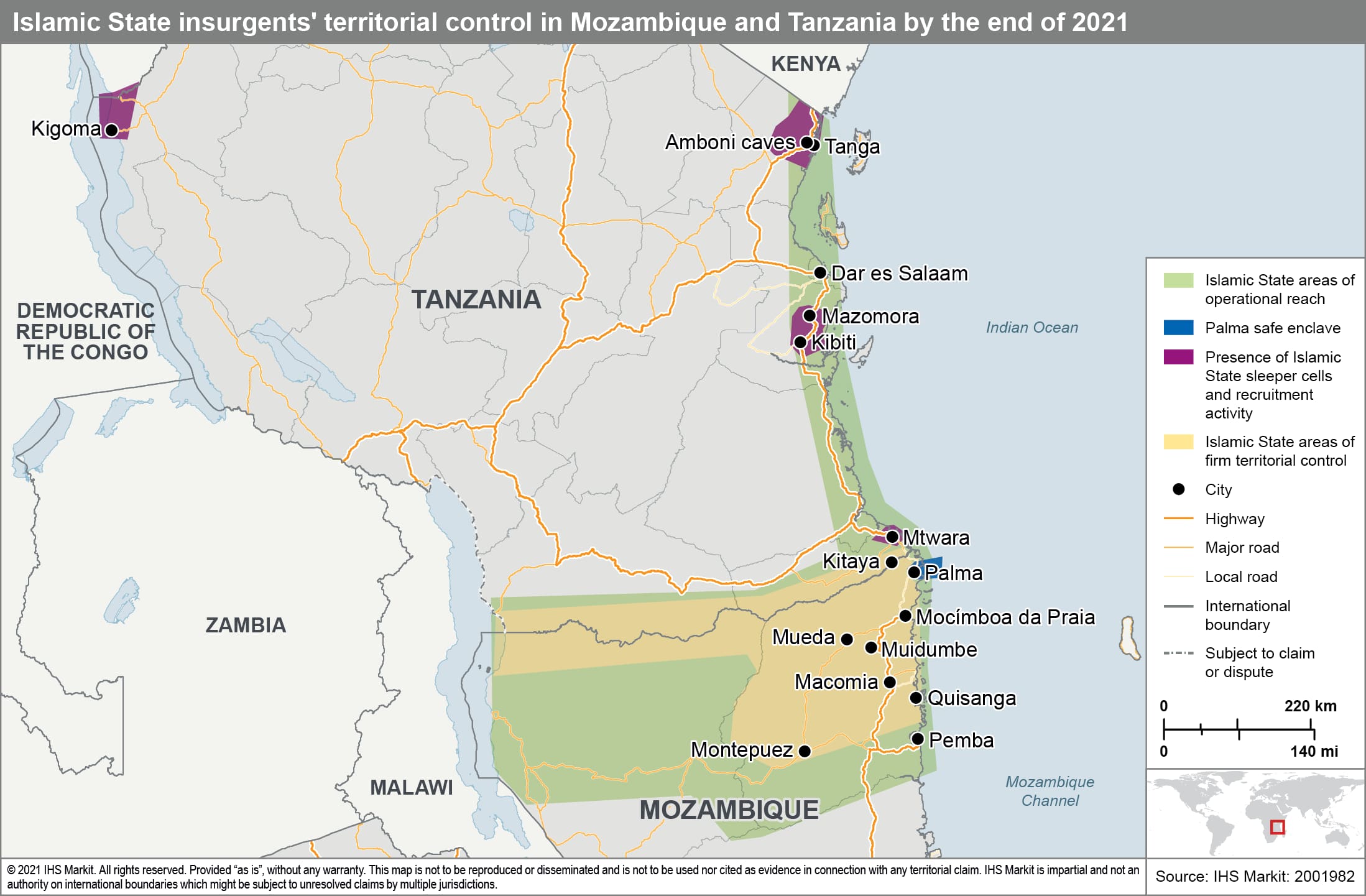 Insurgents' capability on land and at sea remain limited. Their rapid expansion has been due to the government's security forces posing nearly no resistance, due to corruption, defections, lack of training and competition between the FADM, the police and private contractors. Insurgents have in addition secured a steady stream of revenues thanks to a likely deal with pre-existing illegal traders involved in heroin shipment.

Insurgents' lack of rapid boats, IEDs and long-range rockets, precludes any attack on the LNG offshore facilities, aircrafts, and commercial maritime cargo but their significant revenues make it likely that, if left unhindered, they will progressively acquire this technology from the second half of 2021.

A foreign military response would likely be the most effective way of ending the insurgency. The Mozambican government has this year reportedly discussed assistance with Tanzania, South Africa, France, Portugal, the EU and the US. The US and France in particular have discussed maritime agreements with Mozambique that would allow them to patrol in the Mozambican channel, protecting offshore facilities thereby effectively, in our view, deterring attacks on these assets.