In adapting to the energy transition, refiners diverge on business and investment strategies

As the world shifts to lower-carbon fuels, refining companies are changing the ways they come to market, maximize profitability, and choose investments. Yet the choices they make differ - by both region and company.

The modest growth in refined product demand and the increasingly competitive and relatively local nature of the retail convenience industry has heightened the pressure on fuel retailers in Europe and North America. Major global oil companies are abandoning the traditional integrated operating model and switching to a branded wholesaler model in fuel retail.

These leading companies have lowered their site counts as part of a broader contraction of downstream rationalization. Faced with declining demand and refining overcapacity in Europe, brands reshuffled their portfolios by shedding some non-core refining and marketing assets. Since 2012, refining capacity for the global majors decreased by 16%, to 4,729 thousand barrels per day (b/d), while their retail network dropped by about 15%.

Yet the response to energy transition challenges has not been the same across the market. We see regional and company-specific differences among the major global players, especially when it comes to convenience store (C-store) integration and the expansion of electric charging infrastructures. 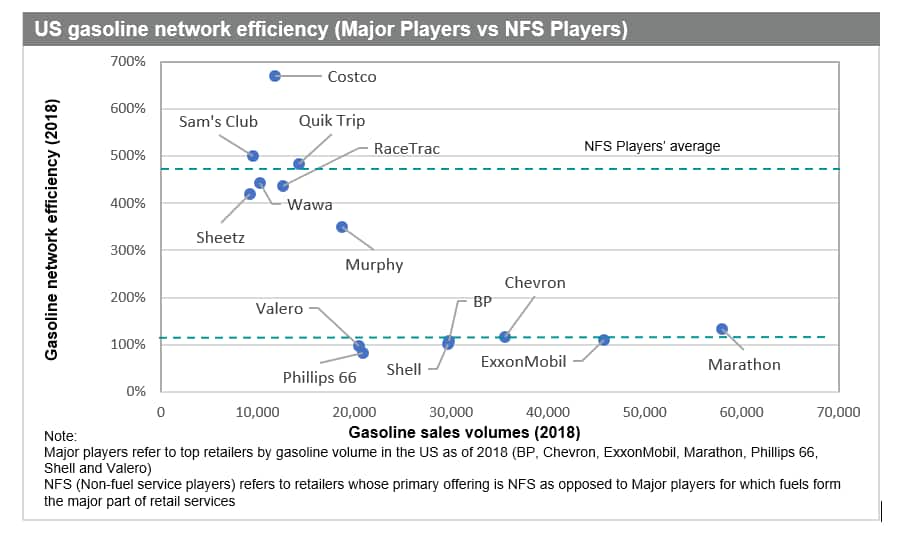 The shift to a branded wholesale model is largely complete in North America, where consumer behavior helped pave the way for new strategies for refining companies. Shoppers increasingly look for fuel outlets that offer competitive prices or co-location with grocery stores or hypermarkets, rather than a particular brand of fuel. Outlets with more comprehensive non-fuel services, such as integrated C-stores or carv washes - deliver a far-higher average fuel throughput than standalone fuel stations. Recognizing these trends, many companies - even those with a previously limited retail presence - have integrated C-stores into their operations.

Surprisingly, the major refining companies own very few of these retail outlets. Most commonly, brands enter into long-term supply agreements - typically 10 years or more - with third parties, who run the stores. While ExxonMobil, BP, and Shell have completely moved to a branded wholesale model in the US, Chevron still owns a small portion (less than 5%) of its retail channel.

This pullback from traditional retail operations paved the way for a host of new players - such as hyper marketers, traders, or pure marketing players - to participate in this market (see Figure). And most of these non-refiner brands demonstrate relatively high average fuel throughput per site, as they tend to offer lower gasoline prices to drive higher sales (and profits) from non-fuel sales. In the US, non-fuel sales account for a majority of retail earnings and they deliver higher profit margins than fuel sales. Although most global brands no longer own their service stations, most are investing heavily to improve the quality of their non-fuel offerings - investments that benefit both retailers and station operators.

Refining companies play to their strengths To expand and improve its non-fuel offerings in the US, BP formed a joint venture with Thornton's, while Chevron partnered with Jacksons Food Services to form a joint venture under the name ExtraMile Convenience Stores (EMCS). Other brands, including ExxonMobil and Valero, are revamping their proprietary C-store concepts, pushing money or incentives to store operators to facilitate the transition. Shell also introduced its own high-end convenience store concept.

C-store integration offers pros and cons for brands. Branded wholesales receive only a fraction of fuel margins and sacrifice all significant earnings from non-fuel sales. Yet retail margins, for both fuel and non-fuel, are typically far less volatile than either refining or upstream margins. And the branded model guarantees a supply outlet for the oil company while increasing the brand's exposure to consumers. This integrated model improves financial stability for many refining organizations.

In Europe, trends vary by country. Many major global brands are continuing to embrace the branded wholesale model. For example, ExxonMobil moved to the branded wholesaler market in several large European markets, including the United Kingdom, France, and more recently Italy and Germany. Other brands have adopted the model, although to a lesser extent, such as BP in France and the UK and Shell in the UK, Norway, and Sweden.

This shift comes at a good time for companies with a large European presence, where demand for refined products has declined. In addition, a focus on mobility has encouraged brands to increasingly support electric vehicles (EVs). Companies are deploying additional charging stations and the infrastructure needed to expand their EV consumer base.

Shell is building on partnerships to strengthen its electrification network, and it has also developed a strong foothold in alternative fuels and non-fuel offerings. The company already has one of the most comprehensive C-store integrated models in most of its European markets, featuring one of its own stores such as "deli2go," "Shell Select," "Deli by Shell," or "Shell Fresh" or delivered through a partnership. Shell also entered into Europe-wide partnership with Ionity in 2018, proving its commitment to develop the infrastructure for alternative fuels. In Germany, the company plans to develop 200 charging stations at its own outlets by 2020. It also intends to expand its current network of charging points in the UK by 200 this year.

BP has become a major player in the EV infrastructure in Europe, thanks to the recently acquired company BP Chargemaster. Through Chargemaster, BP also owns Polar - the largest EV charging network, with 7,000 public charging points in the UK. The company plans to install 400 ultra-fast chargers at its retail locations by the end of 2021.

ExxonMobil has well-established non-fuel services in the European region, but it is also moving towards building a widespread E-charging network in the region. In 2019, ExxonMobil launched "The Mobil EV" product line, which provides high-performance fluids for gears, bearings, and thermal management in EVs. TOTAL has invested in developing new business in alternative fuels. Not only did the company acquire G2mobility, a leading French provider of EV charging solutions, it also plans to create a network of 1,000 high-power charge points to be installed in 300 of its retail outlets by 2022. The company is also focusing on deployment of hydrogen stations and natural gas vehicle (NGV) stations in key European markets. Total is also working towards supplying its charging stations with renewable energy.

Investment strategies in the new normal
The majority of leading refining companies are moving to a branded wholesale channel as a method of addressing the energy transition. Yet not every player is making the same investment choices. Marathon, the largest regional company in North America, still owns most of its retail outlets and seems to be thriving. As fuel demand continues to decline, competitive pressure on retailers will undoubtedly increase - necessitating further shifts in their business strategies. Service stations will rely on non-fuel sales even more than they do today. For global brands and their partners, success in the service station sector will increasingly depend on drawing in customers who are there to purchase non-fuel goods.

How will firms move forward? Where will they invest and what steps will they take to succeed in a changing market? IHS Markit will continue to track their movements and share the insights that may affect your business.

John Barsby is a director of the Chemical Consulting team based in the Dubai office for IHS Markit.
Rahul Bhutani is a Research and Analysis Director at IHS Markit.

IHS Markit experts are available for consultation on the industries and subjects they specialize in. Meetings are virtual and can be tailored to focus on your areas of inquiry. Book in a consultation with John Barsby and Rahul Bhutani.