An event the scale of Amsterdam's annual International Broadcasting Convention (IBC) tradeshow-this year attended by a record 57,669 industry professionals-tends to leave no stone unturned in its demonstration and examination of the latest technology shaping the TV and video industry. Conversations with vendors about their latest wares and the direction of the industry are at the core of the event, but less common are discussions with executives on the operator side of the business about the issues they are facing. IHS Markit was, therefore, pleased and proud to be the sole analyst firm present at a special behind-closed-doors roundtable of pay-TV video executives organised by China's Huawei Technologies.

On hand to discuss the topic of video business success for telcos were representatives from a diverse mix of major pay-TV operators from some of the largest markets in Europe, Latin America, and Asia. Given the privilege of setting the scene for an extended discussion, IHS Markit presented its analysis on the evolution of the telco video business. As part of our presentation, we identified the 50 leading telco video groups by subscription and the performance benchmarks they have set. 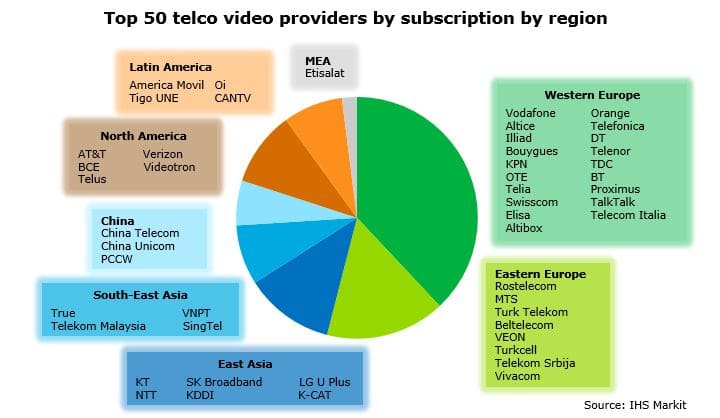 Furthermore, we categorised, examined, and detailed the winning strategies that have characterised the success of these telcos.

The analysis presented at IBC, and briefly outlined above, represents a preview of forthcoming deep-dive research to be published in a white paper, Video as a Core Service for Telcos: Analysis of 50 Leading Operators in Achieving Video Business Success, in November 2017.

The insights shared by operators in the roundtable discussion shed light on various aspects of the telco video business, including cause for optimism as well the challenges faced in the changing landscape.

One consensus-a positive-was that telcos, as providers of access and not simply content alone, are well-placed to retain their position in the multiplay market. As long as consumers want digital content-whether video, music, or online games-they will need to pay for access to networks in order to get it. And, echoing the view of IHS Markit, the operators in attendance generally saw video as a core service that represents the most marketable hook for attracting customers to their broadband and mobile offerings. Indeed, it was video's indirect contribution to the broader telco business, in terms of its role as a bundle draw, that was highlighted by some as being more important than the revenue generated in isolation by videos.

Some operators are being more aggressive than others in making video a core service for their customers, pushing alternatives to traditional pay TV in the form of flexible online video offerings bundled with mobile and/or broadband. Many are even completely unbundling access to video via standalone online services, to ensure that they have as many customer relationships as possible for ongoing cross-selling and upselling efforts-again, underlining video's importance as an indirect revenue generator.

Assessing shifts in the content rights landscape, the operators did not feel that fragmentation would threaten their strong position as video aggregators. With the likes of Disney unbundling their channels via dedicated direct-to-consumer (D2C) apps, operators will still be needed as distribution partners for these offerings, it was argued. Such a scenario points to the rise of a new kind of carriage deal, in which operators strike agreements to carry on-demand video apps instead of linear channels, much like they have with Netflix, itself a channel-like online video service.

However, in spite of content owners' ongoing need for telco distribution partners, the D2C trend is still, in the IHS Markit view, a somewhat worrying trend for those operators when it comes to their pay-TV ambitions. A wider, a-la-carte distribution of key subscription video content on alternative platforms (e.g., those of Amazon, Google, Roku, and others) has the potential to marginalise traditional pay TV and undermine its appeal.

As to challenges, one area in which operators agreed they needed to improve is customer data-in better using what they have, as well as in gathering more of it. One executive admitted that after prioritising things like product strategy or customer acquisition and retention, collecting and analysing data was the last thing his company thought about-yet was what they needed to give more attention to, in order to unlock its value.

One problem, though, is the lack of access to data for operators when they work with partners such as Netflix and YouTube. This is because their visibility ends once the customer enters the app, at which point operators do not know how such customers are using the services. This highlights one of the challenges of providing access to third-party apps, compared to linear channels and in-house on-demand services.

While the operators at the roundtable expressed a willingness to work with online content services that either behave like channels (Netflix) or aggregate semi-professional multi-channel network (MCN) content that is not widely carried by traditional TV (YouTube), they were more wary of online aggregators moving into professional programming-specifically, Facebook.

The social network's new Watch service, which has ambitions of hosting long-form, 30-minute TV shows, was identified as posing a threat to pay TV, by providing an alternative platform for operators' traditional content partners. With Facebook, Twitter, Snap, and others ramping up their video growth strategies, they will become increasingly bandwidth hungry.

This might be good news for operators from a broadband and mobile perspective, but is less positive for their video business.