Southeast Asia (SEA) region has huge solar potential as it is located near the equator. Meanwhile, the coastal areas in the region have considerable potential to harness wind energy. The development of solar and wind resources in the power sector was relatively slow as renewables were not cost-competitive over thermal power plants. Recently, the renewable expansion has been accelerating, marked by more large grid-scale projects in the region.

Vietnam, outpaced the rest of the SEA markets, has made substantial efforts to promote renewable energy (RE) during the last several years, with RE accounting for 31% (or 21.3 GW, in which 80% contributed by solar) in the energy mix as of 2020 installed capacity. Until recently, solar and wind energy deployment begin to spread evenly across more nations. 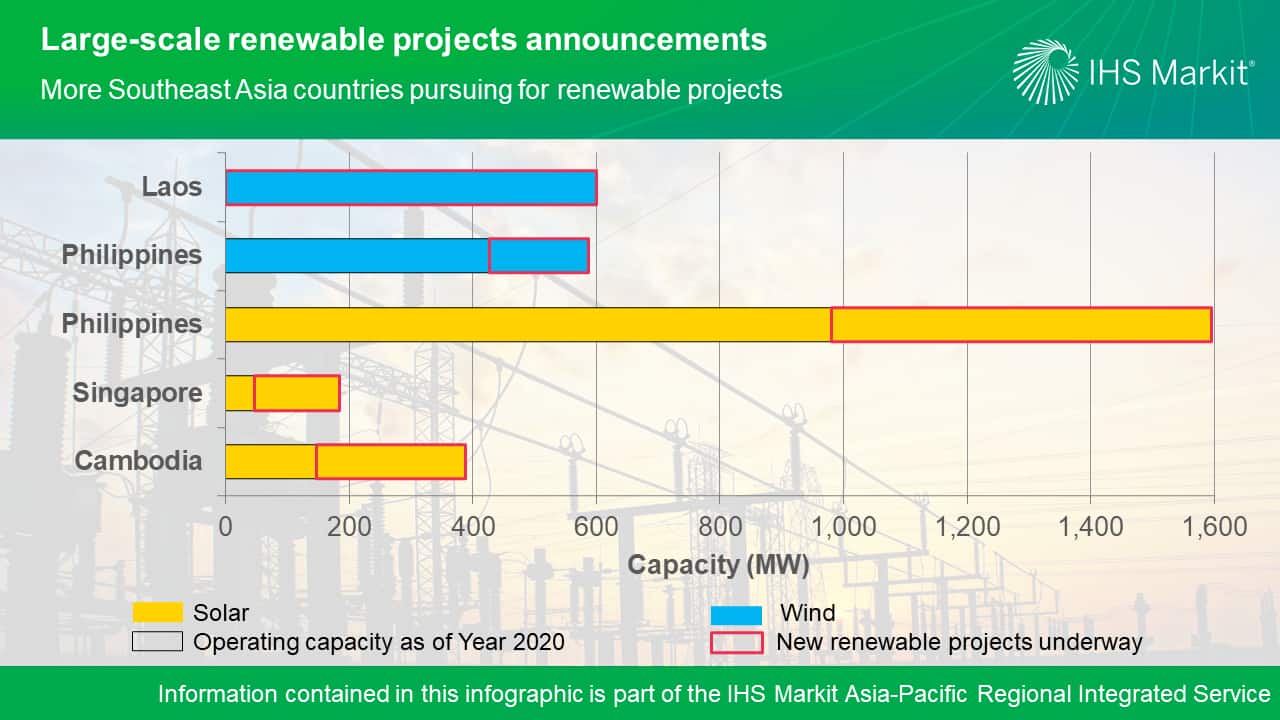 Philippines has long been a solar and wind energy player owing to its immense indigenous resources, but the nation appeared to be not aggressive enough in RE deployment (as of 2020, the energy mix contains 3% solar and 2% wind).

By the second quarter of 2021, the Philippines took off with large-scale RE projects - 615 MW solar parks and a 16 MW wind farm. The first solar project was announced on May 17, a 115 MW solar project that will be co-develop between Japan's Mitsui & Co. and the Philippines' IPP Global Business Power Corp. The US$63.8 million project is located in Rizal province; power generated will be sold to Manila Electric over a 20-year contract upon completion in March 2022.

It was followed by the first-phase construction of the country's largest to date - 500 MW solar park in Nueva Ecijia province by Solar Philippines on June 28. The unsubsidized power plant will supply power to the Luzon grid once it is completed. However, Solar Philippines is currently seeking off-takers for the project that could also sell into the Wholesale Electricity Spot Market during the highest demand.

Philippines also begun the construction of a 16 MW wind farm at Ilocos Norte, which is set to be the country's largest wind farm to date. The 11.4-billion peso project is co-developed between Philippines's AC Energy and renewable energy developer UPC Renewables. It is estimated to be complete by the fourth quarter of 2022 and will supply energy to Luzon.

Philippines's Luzon grid has long been threatened by thin power reserves, make it vulnerable to hot weather season, especially from the end of May to the beginning of June 2021. As a result, Filipinos on Luzon grid were experiencing multiple rotating outages due to the grid's low power reserve by early June. Hence, it was believed that by relying on solar and wind energy, the issues of thin power reserves would be resolved sooner.

Laos, which aspires to be "the battery in SEA", has been more reliant on hydropower over the past few years. Following the severe drought in Mekong River by 2019, Laos begins to reduce its dependency on hydropower by diversifying its renewables energy mix.

By June 2021, the Japan's Mitsubishi Corp. announced its investment in SEA region—the first-built 600 MW onshore wind farm project in Laos, which is co-invested by Thailand's Impact Electrons Siam Co. Ltd. This project is one of the largest onshore wind farm projects in the SEA, and the construction is expected to start by 2022 with a scheduled operation by 2025. The power produced will be exported to Vietnam Electricity (EVN) under a signed 25-year PPA, through the 500 kV transmission line from Laos to Quảng Nam province in Vietnam. This project is expected to increase the cross-border power sharing in the SEA region.

Cambodia's 2020 Power Development Plan target to achieve 1.8 GW of solar by 2030, and allowing 100% foreign ownership has boosted the solar development in the nation.

Multiple solar projects with a total of 240 MW was announced in Cambodia. The real estate developer Hong Lai Huat Group has signed an MOU with the Chinese China Machinery Engineering Corp (CMEC) by April 26, to co-develop a 200 MW solar project at the Aoral Eco-City (the mega integrated agriculture eco-city project), Aoral province. The collaboration will last 20 years, with a 20-year renewal option, costing US$200 million.

Then by May 24, the Asian Development Bank (ADB) announced an additional financing of US$7.64 million for the second-phase construction of Cambodia's National Solar Park Project in Kampong Chhnang province. This project was divided into two phases, where the 18-month procurement plan for the second phase 40 MW solar park was approved by April 27.

Upon completion, both solar parks will sell electricity to state-owned Electricite du Cambodge (EDC). The massive 240 MW solar projects, which witnessed more than 100% increment from 2020 operable capacity, could significantly increase the green energy share of the country's power supply.

The first offshore floating PV system was installed by Singapore's solar energy provider—Sunseap Group—where the construction of the 5 MWp offshore floating solar farm was completed by March 25 in the Straits of Johor between Singapore and Malaysia.

Singapore also innovates and uses technology extensively to build its second floating solar system at Tengeh Reservoir through a 25-year PPA between Singapore's National Water Agency PUB and Sembcorp, in which Sembcorp will design, build, own, operate, and maintain this project. The sprawling installation to support 60 MWp floating solar system was completed by May 18 and covers 45 ha of the water surface; it is recorded as the country's largest to date.

Additionally, on June 17, an offshore solar farm with 72 MWp was planned on the operational Semakau landfill. This project is planned by Shell Singapore and JTC Corp under a non-binding MOU, supported by the Energy Market Authority (EMA) and the National Environment Agency (NEA).

Learn more about our research and insight on the Asia Pacific energy market through our Asia Pacific Regional Integrated Service.

Cecillia Zheng is an associate director with the Climate and Sustainability team at IHS Markit.

Choon Gek Khoo is a Research Analyst with the Climate and Sustainability team at IHS Markit.

RT @DanielYergin: The combo of global energy and geopolitical crises (plus inflation) means little can be done in the short term re: high o…