A Tale of Two Currencies: Turkish lira and Zambian kwacha

"It was the best of times, it was the worst of times", so begins the Charles Dickens classic, A Tale of Two Cities. In 'A Tale of Two Currencies' divergent trends have been seen in Zambia and Turkey over the second half of 2021 so far, and the latest PMI business survey data compiled by IHS Markit for these countries highlight the impacts currency movements can have on inflationary pressures and business performance. 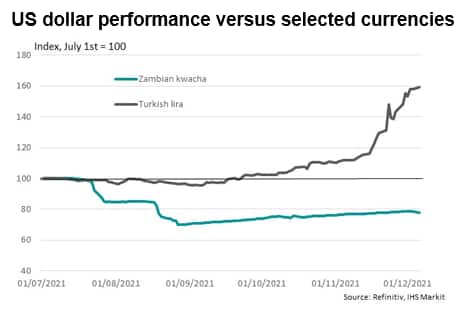 Recent years saw the Zambian kwacha come under increasing pressure versus the US dollar. Between mid-2017 and mid-2021 the currency depreciated by over 150% against the dollar, contributing to consumer price inflation peaking at 24.6% in June and July of this year.

Over the second half of 2021, however, the kwacha has appreciated against the US dollar following an election won by the opposition United Party for National Development. The new government has entered into negotiations with the International Monetary Fund (IMF) for a support programme and aims to bring down inflation and domestic borrowing.

The kwacha has gained over 20% against the US dollar over the second half of the year so far, the best of any of the currencies tracked by Refinitiv worldwide.

The strengthening currency has been a key factor highlighted by respondents to the Stanbic Bank PMI survey (compiled by IHS Markit) for reductions in purchase prices. Firms have been able to keep a lid on costs despite global price pressures, with lower costs passed on to customers in the form of selling price reductions. Charges have consequently been lowered in each of the three months to November. This discounting has helped companies to secure a return to growth of new orders and business activity, with both rising at the sharpest rate in close to three-and-a-half years in November. 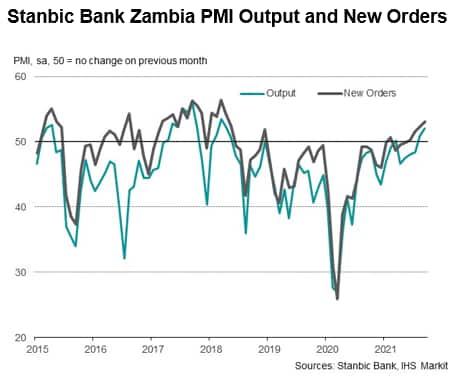 Official data showed that inflation of consumer prices slowed to 19.3% y/y in November, the lowest in the year-to-date but still well above the 6%-8% central bank target. As such, the Bank of Zambia raised interest rates from 8.5% to 9% in November.

At the other end of the scale, the Turkish lira has fallen in value by almost 60% against the US dollar over the second half of the year so far.

The depreciation of the currency has added to a build-up of inflationary pressures in the Turkish manufacturing sector, according to the Istanbul Chamber of Industry Turkey Manufacturing PMI. The rate of input cost inflation accelerated sharply in November and was the fastest since September 2018, a period which also followed a sharp depreciation of the Turkish lira. Almost three-quarters of companies saw their input prices rise over the month, with a high proportion of those respondents linking the increase to currency weakness.

In turn, firms felt forced to pass higher input costs on to their customers and output prices increased at the sharpest pace since the survey began in June 2005, surpassing the previous record from September 2018.

Official figures for November showed year-on-year inflation of producer prices and consumer prices accelerating in Turkey to 54.6% and 21.3% respectively, with further strong inflation likely in the months to come, increasing the difficulties faced by Turkish firms.

These contrasting pictures show the effects currency fluctuations can have on economic performance, and highlight how quickly the PMI surveys illustrate these impacts.

To hear about this story, and much more, tune into our latest podcast, found here.