A sting in the (fat) tail; strategic planning for war risk scenarios

The shock of Brexit for global markets, and the deep ramifications for European and global political and economic order is a reminder of the impact of a class of events which seem so outlandish that they 'can't happen' right up until they do happen. It is this class of 'tail risk' event that conflict between major powers (short hand for the permanent UN Security Council members of US, Russia, China, France, and for now at least, the UK) belongs to. As organisations begin to try to untangle the practical economic and political implications of Brexit, it is an appropriate time to take stock of other global shocks. When the unthinkable appears to be occurring increasingly often and events are unfolding in which 'rational interests' are seemingly winning out to political miscalculation and populist politics, what other 'unimaginable' scenarios are worthy of sober assessment?

Wars and civil conflict in the Middle East and Africa are seen by many organisations with investment or operational exposures there as the norm. Events such as recent border skirmishes between Eritrea and Ethiopia, or even the conflict in Yemen threatening security of one of the world's key shipping lanes though the Bad El Mandeb have raised few concerns. Outside of specific investors or insurers with direct exposure to such volatile territories, war is not seen as a major shock. In recent months, however, the intensity of media reports about escalating military competition between the world's major powers has been dramatic. Behind the media noise there have been a number of rapid developments in quick succession that relate to the risk of war between the US and its allies against Russia or China. Nearly every week there is yet another report of China's military pushing the boundaries of US and allied security dominance around its disputed waters, or NATO responding to Russian military aggression through enhanced deployments of troops and equipment on its eastern flank. On June 17 it was reported that US jets had been scrambled as Russian planes bombed US-backed rebel forces near the Syria-Jordan border, an incident that highlights the margin of error that could lead to an escalatory incident.

The data trends back this perception of increasing war risks. The IHS Country Risk database of intelligence events has seen a sustained increase in the volume of observed indicators of War risk between Russia and NATO over the last eighteen months. A similar increase is observed in open source media reporting of South China Sea disputes. 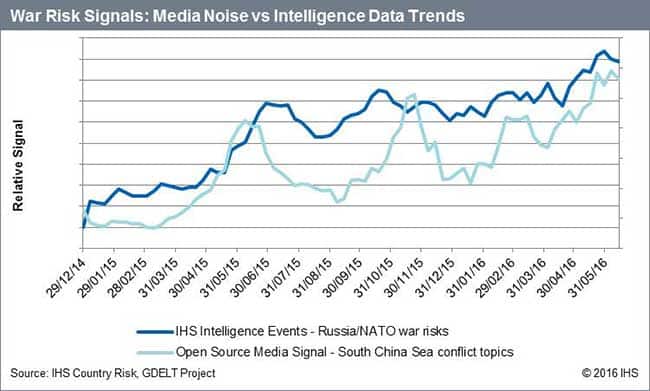 But such data trends themselves are insufficient to understand risks. IHS Realistic Disaster Scenario modelling of the potential pathways to major powers conflict suggests that its probability has slightly increased over the last 5 years and will increase further over the next 10 years. This is being driven by a complex set of geopolitical factors that are increasing the capability and willingness of Russia and China to militarily challenge US security supremacy in their regions. Meanwhile, technology developments in the domains of cyber and unmanned systems are eroding some of the barriers to willingness to use force or blurring previously understood "lines in the sand", and are heightening risks of strategic miscalculation. Furthermore, there are some very profound political shifts emerging that if sustained threaten the strategic foundations of international order - not least the unity of Europe (further in doubt post-Brexit), and the United States' commitment to its role as a guarantor of global security. While our base case is that these risks will be managed, that no party is seeking war, and 'all out' war still has very minimal likelihood, there are many credible pathways, many driven by domestic political drivers in Russia, China and their US-allied neighbours, in which strategic miscalculation could lead to limited, short duration war between major powers in the next decade. Assuming that war will not happen because it is not in 'anyone's interests' is to fail to appreciate the law of unintended consequences. If a gamble of internal politics, such as David Cameron promising Conservative party Eurosceptics a referendum at some indeterminate point in the future, can precipitate the reversal of a half century of European integration, how much confidence can be placed on the future political and security decision making of Putin's or a post-Putin Russia, for example?

Much of the discussion around war risks in the media or think tanks is from a policy perspective. How should NATO respond as an alliance to dissuade and deter Russia from carrying out provocative and aggressive actions against its Baltic neighbours? How can the US retain dominance of the air and sea around its regional allies in the Pacific? There has been little analysis of the relevance of war risk between major powers to the corporate sector or financial markets. Perhaps this is because a major powers war is perceived as such a remote possibility (although the tail of the probability distribution of war risk is much fatter than many assume) and that it is not worth conducting planning for at a corporate strategy and risk management level. Or maybe it's seen as too complex a scenario for internal teams to even begin to model the significance of - without a deep understanding of both the political drivers for war, military capabilities and doctrine, and performance of weapons systems, such analysis risks superficiality.

Organisations with a sophisticated awareness of geopolitical risks are starting to conduct strategic planning on war and related risks. In June 2016 it was reported that Norway's oil fund had been working on contingency planning to minimise risks to their assets in the event of extreme political events. In part this appears to have been triggered by the dispute between rival factions over control of Libya's sovereign wealth fund following that country's civil war. Norway's prudence in thinking about how it would manage the very worst case scenarios may have been given impetus by the current concerns over NATO-Russia relations. Nevertheless, there are a number of countries that have an exponentially higher likelihood than Norway of suffering extreme political instability such as coup or civil war, for which investors may benefit from understanding the risks of better.

Insurers who offer explicit cover for war risks under standalone Political Violence, or for aircraft and vessels Hull (war) policies are well aware of the need to assess and quantify potential exposures to risk scenarios. Less well understood is how 'risk clash' may lead to correlated losses across lines of business, or how wars may lead to non-underwriting risks to operations and investments. Outside of the risk industry, understanding of how wars may occur and affect investments and operations is basic, yet should be analysed more extensively for a number of reasons;

While the likelihood and timing of any future war are uncertain, and that uncertainty increases as time horizons move further out, scenario modelling that blends rigorous intelligence of the intentions and capabilities of relevant actors can help organisations understand the range of potential triggers for a conflict, and the mechanisms through which a seemingly stable risk environment could rapidly deteriorate, and the potential scale and nature of ensuing damage to assets. Although right now major powers war is very unlikely, IHS modelling suggests that under certain realistic geopolitical development pathways over the next 5 years, the risk would be significantly higher. Given the rapid and profound shifts in the global environment over the last few years, it would be short sighted to discount the potential for rapid shifts in assumptions underpinning current risk assessments. Planning for a range of credible scenarios can help organisations better anticipate and be resilient to a range of unforeseen events that do occur.

U.S. jobs recovery depends on small business, which remains under great threat. Get the $INFO:… https://t.co/0p4pBC3aCU