Over the past decade Canada has consistently been amongst the fastest growing producers of crude oil globally. And although growth is set to slow, additions are still expected to be able to add nearly 1 million more barrels per day of output by 2030.

The rise in Canadian production has been a story principally fueled by the expansion of the Canadian oil sands. At its peak, in 2014, over $30 billion was invested in the construction of over 1 million b/d of production capacity. However, this also fueled cost inflation. When the price collapse of 2014/15 set in, the anticipation of a quick payback for many new entrants in the oil sands evaporated and interest for many declined.

Four and a half years later, the majority of the large oil sands projects in construction at the time of the price collapse have been completed. This includes mega-scale mining operations and several SAGD operations. The onset of the oil price recovery restarted several projects deferred during the worst of the low prices. Operators have also advanced capital efficiency initiatives—projects aimed at improving reliability and output from existing operations. This includes debottlenecking projects and investment that can make use of underutilized capacity in existing operations to achieve higher output. Over the past five years, this ongoing activity allowed oil sands output to expand by three quarters of million b/d and made Canada the 4th largest producer in the world.

Yet, pipeline infrastructure has not kept pace and late in 2018 supply overtook available takeaway capacity. Crude-by-rail was called upon to fill in the gap, but lagged demand and the result was price volatility at a scale with few parallels in the history of the oil markets. Western Canadian oil price differentials traded from as little as $11/bbl below US benchmarks, to over $50/bbl. The volatility in western Canada, was addition to that which occurs in the global oil market, which saw both a bull and a bear market in 2018.

Faced with the prospect that if the extreme oil price discounts of late 2018 persisted much longer, some companies might have struggled to remain solvent, the Government of Alberta took the extraordinary step to intervene in the market to correct the oversupply by mandating crude oil production cuts for 2019. The impact was nearly immediate on price differentials and since then they have generally averaged less than $12/bbl (though recently there has some modest widen)—less that would be indicated by historical transportation and quality adjustment to US benchmarks due to a tightening heavy oil market.

Yet, since the collapse in 2014/15, only one new largescale oil sands project has been sanctioned, only to be delayed by the uncertainty presented by price volatility and Alberta curtailment. Assuming Alberta curtailment generally eases over 2019, rail capacity and movements are likely to build over 2019. But in the absence of new pipeline infrastructure there is a sense of price insecurity in western Canada that will continue to weigh on new large scale incremental investments in the Canadian oil sands. With large scale oil sands projects taking two, three, four or more years to be brought online, the reality of slower pace of investment and growth in the Canadian oil sands is taking shape. The unfortunate irony for the Canadian oil market and producers is that the call on Canadian heavy sour crude oil—the principal export from the Canadian oil sands—has never been greater. The rapid deterioration of Venezuelan output is tightening the supply of heavy sour crude oil globally and reducing the magnitude of the historical quality discount between heavy and light crude oil.

Moving into the next decade, a slower pace of oil sands growth is taking shape. This is something we've discussed in nearly all our preceding oil sands outlook releases.* As shown in Figure 1, whereas growth over the current decade regularly averaged year-on-year supply additions in excess of 150,000 b/d per year, in the coming decade additions are shaping up to be more modest at beneath 100,000 b/d. 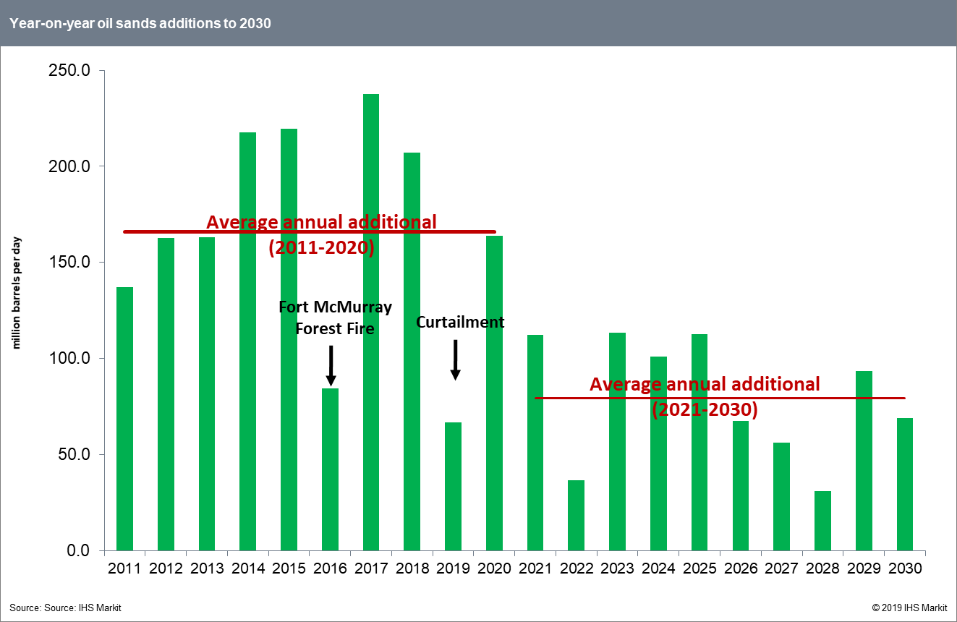 This is a function of a view that while oil prices of the past few years were unsustainably low, the prices that prevailed over the first half of this decade—on average in excess of $100/bbl—were equally unsustainable and a lower long-run price expectation is likely to result. In this environment, upstream producers globally have collapsed onto the assets they view that they may have the greatest strategic competitive advantage to specialize in. This trend included the oil sands where many global oil and gas players divested assets to localized specialists in oil sands extraction—predominately legacy Canadian-based oil sands companies. Certainly, the negative perception of the carbon intensity of oil production weighed on those decisions. As a result, even in the event of a major upswing in prices, there are simply fewer instruments left in the band at this point to muster the level of activity of years gone by. 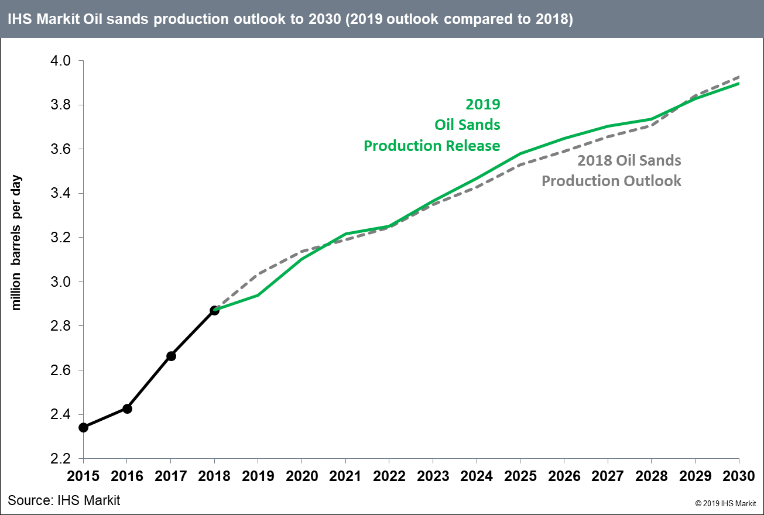 Despite a more modest growth profile, Canadian oil sands production is still expected to reach nearly 4 million b/d by the close of the coming decade—nearly 1 million more than today. However, the drivers of growth in the coming decade are fundamentally different. Over the past decade and a half the majority of activity was focused on building out a foothold in the oil sands. Today there is well over 3 million b/d of installed production capacity in place. It is from this base—ramp-up of recently completed operations, and optimization and debottlenecking of existing production capacity—where most production growth is expected to come. IHS Markit expects two-fifths of the anticipated rise in oil sands production to 2030 will come from ramp-up of projects in construction or recently completed, including optimization; about one-quarter of growth will come from projects where some construction or site clearing has begun but are currently on hold as well as debottlenecking of existing operations; with the remainder of growth coming from 'new projects', principally the expansion of existing facilities.

IHS Markit had anticipated 2019 to be the likely pivot point in the shift towards more modest year-on-year gains. However, the decision by the Government of Alberta to artificially reduce output has deferred some of the anticipated production gains for 2019, into 2020. There is upside growth potential in the coming decade for the Canadian oil sands; the key being the ability of government and industry to restore confidence that crude oil produced in western Canada can get to market at a reasonable transportation cost and the carbon intensity will continue to trend down.**

You may also be intersted in: