For years India has held the alluring potential of becoming a global leader in industrial manufacturing. However, the country's glorious promise has been thwarted by a convoluted tax system and insidious political interference, resulting in an overall lack of investment, specifically within infrastructure.

This gloomy state of affairs is now set to change: India today is on a path toward substantial growth in manufacturing and industrial automation over the next five years, thanks primarily to governmental reforms expected to lead to an increase in domestic and foreign investment.

Under the new regime of the Bharatiya Janata Party, led by Prime Minister Narendra Modi, there have been two rounds of fiscal reforms, announced in July 2014 and February 2015, along with plans to position the country as a leading foreign investment destination. One of the objectives of the reforms is to reduce the complexity of India's current tax system, which often creates a barrier to foreign investment while also reducing international competitiveness among domestic manufacturers due to the added costs local makers incur.

Also of significance is Modi's "Make in India" initiative, launched in September 2014, which aims to incentivize investment as well as encourage sourcing and distribution within the country, the seventh-largest in the world in area and second only to China in population. There is also a target to create 100 million new jobs by 2022 in manufacturing alone, which-along with the prevalence of English language amongst the country-should help to facilitate growth in industrial automation.

Given these encouraging developments, IHS forecasts that machinery production in India will grow faster than that of its huge neighbor to the north, with India's revenue for the sector rising at a compound annual growth rate (CAGR) of 6.3% from 2015 to 2020, compared to 1.7% for China during the same period.

True, India still has a long way to go in matching China's output in machinery production, with New Delhi's volume amounting to just 4.8% of the total Chinese market for machine manufacturing in 2015. But with its rapid adoption of what appears to be reliable and cost-effective methods of production, India is on its way-and great expectations are justifiably in order. <span/> 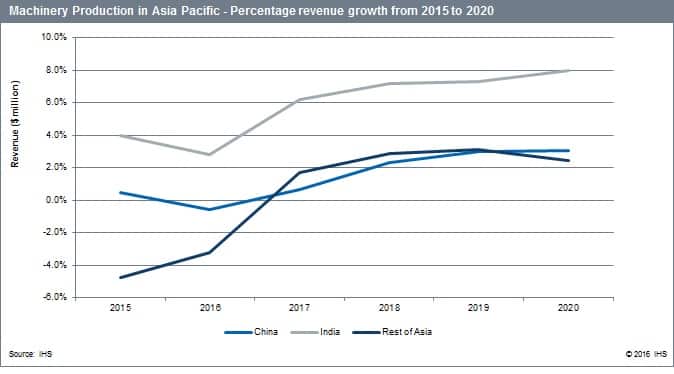 Vinita Jakhanwal is Senior Director for Displays and Research, Centers of Excellence, within the IHS Technology Group at IHS Markit
Posted 24 October 2016