A Greek clean bailout exit is likely but not certain

After more than eight years, there is a real prospect of Greece not being under an economic adjustment programme once the current bailout expires in August. Its economy is finally growing, bond yields have declined significantly, and the political situation has remained more stable than many had feared. 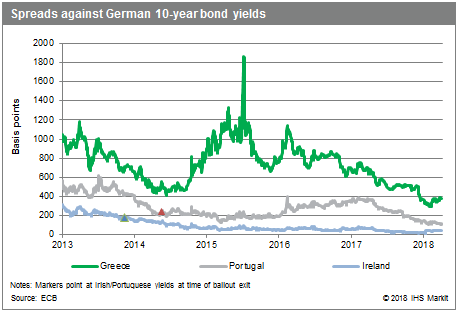 However, this positive picture could change very rapidly and the path to a bailout exit involves multiple challenges. Firstly, Greek banks should be given a clean bill of health by the ECB in the stress-tests due to be published in early May. Then, there is the not minor task of completing the fourth, and last, review of the current bailout, which includes the need to sign off on multiple policies that are likely to be politically challenging. Indeed, it is not inconceivable that the current bailout will have to be extended for a short period of time after August to allow for more time for negotiations. Moreover, for a 'clean' exit to materialise, the economic recovery that started in 2017 must continue. Any concerns that Greece may backtrack on slated and past reforms, or retreat from policies aimed at reducing its public debt, would be likely to have a negative impact on demand for its debt and lead to increasing liquidity pressures at a sovereign level. Similarly, Greece's capacity to fund itself in the bond market may be hindered if international market conditions were to deteriorate. Official creditors' decision on whether to grant further debt relief is also likely to have an impact on demand for Greek debt. A healthy cash cushion - Greek is aiming to have a coffer large enough to cover eighteen months of redemptions - should help to manage short-term market volatility but would not shield the Greek economy completely from a deteriorating market environment.

Assuming the economy continues to grow, the fourth review goes smoothly, and market conditions remain benign, the decision on whether to seek a clean exit or request a credit line will be a political choice. A Greek exit from its bailout would send a strong signal that the country has started to recover following a decade-long crisis, and the government has strong incentives to go down this route. However, a 'clean' exit is not a given and potential indicators that would suggest Greece was not on track to achieve its goal include splits in the SYRIZA/ANEL coalition (that could lead to government collapse), Greece's inability to pass necessary reforms/measures and to complete the last bailout review in time, a deterioration of economic conditions in Greece and a non-conciliatory attitude by Greek officials, resembling the 2015 situation under then finance minister Yanis Varoufakis, which would complicate relationships with international creditors and trigger market concern and a spike in Greek bond yields. A clean exit would not be without risks. Banks - which are still under pressure from elevated non-performing loans and depressed deposit levels - currently enjoy a waiver that allows them to use Greek sovereign-backed collateral for ECB liquidity operations despite the sovereign's sub-investment grade. This waiver is highly likely to be withdrawn if Greece is not under an adjustment program. Although Greece would still have to comply with post-program monitoring, a clean exit may increase market concerns about Greece's commitment to meeting reforms and fiscal targets outside the constraints of a formal program. Multiple previous measures, such as streamlining the public sector and labor market and pension reforms, have been highly contentious and publicly unpopular, serving as the main contributing factor to the considerable decline in SYRIZA's popularity since assuming power in 2015. As a result, there is a realistic probability that SYRIZA/ANEL (or ND or any other party, if in power) would be inclined to backtrack on or at least considerably slow the reformist agenda once freed from a formal rescue program, particularly ahead of elections.

Although not our baseline scenario, we estimate that the probability of Greece requesting, and being granted, a credit line from the European Stability Mechanism (ESM) is not negligible. A credit line from the ESM (precautionary or enhanced) would strike a good balance between meeting the Greek government's aim of exiting its current program and providing some reassurance to markets. A credit line would also help banks to use Greek collateral to secure access to cheap ECB liquidity operations and would thus lead to lower bond yields versus the clean exit scenario. The main obstacle to the credit line scenario is the government's current reluctance to sign a new memorandum of understanding. However, it is likely that SYRIZA/ANEL would still be able to argue that it had complied with its promise to exit formal bailout support. Therefore, it is still possible that the Greek government may apply for a credit line before August despite its current insistence that a clean exit is its only target.

From @NelsonSchwartz in today's NYT: While economists have debated whether the recovery will take the form of a V o… https://t.co/W2V9Oifn8J

What we are watching to gage US economics recovery: How many small businesses will be able to reopen and regain the… https://t.co/bG9jcIfzVP