As the US has sought to exploit its hydrocarbon resources over the last decade, natural gas prices - which were once close to parity with oil prices in the early 2000s - have since diverged from oil prices. This shift evolved through the direct production of natural gas as well as gas production associated with oil development. The dynamic has transformed North America into a prolific producer of natural gas liquids (NGL), the feedstocks used in the production of petrochemicals.

Given the plentiful supplies of these feedstocks and their inherent advantage relative to oil-based feeds, massive investment in grassroots petrochemical capacity - namely complexes dedicated to the production of ethylene - occurred to monetize the gas-linked feedstocks. In the past five years, nearly seven million tons of ethylene capacity were added in North America. This capacity addition is considered unprecedented, given that North American chemical producers took about 20 years to reach an almost equivalent amount of new builds. Between 2019 and 2022, more than six million tons of ethylene capacity is expected to come onstream. An additional 13 million tons of capacity additions have either been announced or are under feasibility studies. While IHS Markit does not believe all this announced capacity will come to fruition, much of it likely will be added and will require a commensurate response on the demand side.

Ethylene demand has indeed been growing strongly as a result of the numerous new integrated ethylene derivative and standalone projects (mainly polyethylene and ethylene glycol targeting the export market) derivative exports from the US have grown. Yet ethylene molecule exports became a hot topic as the substantial increase in ethylene supply in the US as well as a structural shortfall in other regions made the molecule shipments economically viable. Enterprise Products' one million metric ton (MMT) terminal project, which commenced construction in 2018 and is now in a start-up phase, is expected to load the first cargo in December 2019.

In contrast to the accelerated project executions in both ethylene and ethylene derivatives, the overall demand growth for the derivatives is moving slowly this year - a pattern driven by a cyclical slow-down in the global economy combined with prolonged US-China trade tension. These headwinds have inevitably had a negative impact on projects geared towards export markets, particularly those destined for China. Considering this reality, there is an open question on how hard those ethylene derivative projects can operate in the near term to avoid creating an oversupply scenario. The market is now casting increasing anxiety on the potential cycle of surplus.

What is the new solution to consume ethylene?

Ethylene, often referred to as one of the key building blocks of petrochemical value chains, is typically converted to chemical derivatives such as polyethylene, ethylene oxide, styrene, ethylene dichloride, and others. Many of these derivatives will be eventually converted into plastics. On top of those conventional outlets, we now have a new home for ethylene, ethylene to alkylate, a gasoline blendstock. Over the past three weeks, two separate announcements have been made by an investor/operator and an engineering, procurement, and construction firm, discussing a new US Gulf coast project to produce alkylate from ethylene. Although neither announcement commented about the other, IHS Markit speculates that these two announcements are linked to the same project.

The positive final investment decision made by Next Wave Energy Partners pointed out that this complex is anticipated to begin initial production by mid-2022, consuming over 1.2 billion pounds of ethylene per year (515 kilo tons per annum or kta). The expected structure of the project includes one dimerization unit to convert ethylene to butylenes and an alkylation unit that routes produced butylenes (C4) to make alkylate. From a technical standpoint, neither the involved ethylene dimerization nor the C4 alkylation process are novel technologies. However, it is certainly a unique approach that may become a new way to consume ethylene, diverting from traditional chemical use to fuel demand.

Refiners are being pressed to seek new strategies or sources to yield high-octane, clean alkylate products from diverse mandates and trends, including:

The project is quoted at about 515 kta of ethylene consumption and 28,000 barrels per day of alkylate production at a cost just north of $600 million. We queried our technical and analytics group at the Process Economic Program to assess the economic outlook. From the point of a pure merchant buyer of ethylene priced at market price, the economics look good in the near term but a bit challenging in the outer years. (Calculation on this route is based on IHS Markit US ethylene average acquisition index.) In a second scenario, we calculated the project using ethylene priced at cash cost based on ethane feed. The ROI metrics look much better overall from a long-term perspective and compete very well versus the other key ethylene derivative, polyethylene, for the export market (see Figure 2). Thus, the ethane-to-alkylate chain makes a lot of economic sense in the longer run. Both routes to alkylates, whether on merchant ethylene or priced at cost, yield a positive process scheme in the short term from today to 2026, with the excess ethylene capacity and traditional derivatives coming onstream. A player long in ethylene that blends gasoline could be a likely supplier or offtaker in an investment of this nature.

It is unknown whether this new ethylene demand will lead to continued investment in ethylene-derived gasoline blendstock or if it is just one-time occurrence. However, it is clear is that the surplus of ethylene production paved the way for a new source of demand. 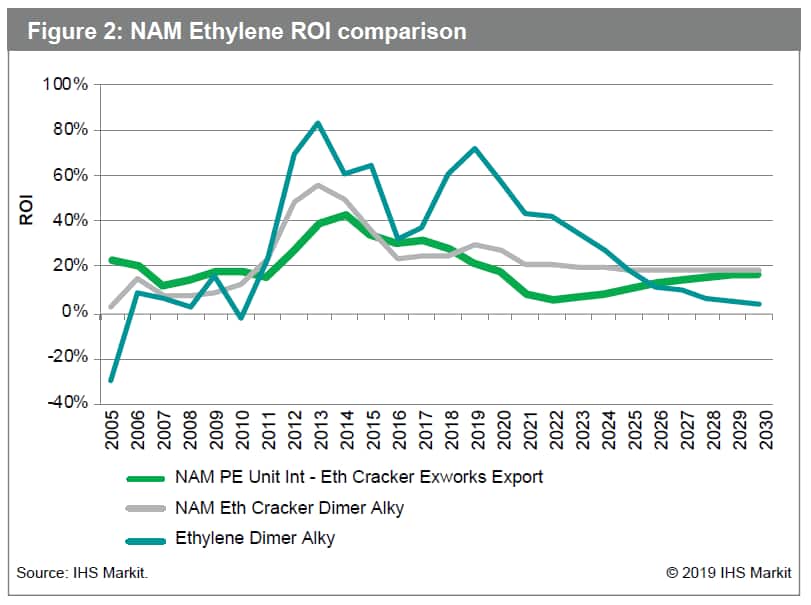 Understand how capacity additions will impact trade flows – including who might be displaced. Sync your long-term pricing forecast with current glob changes. Improve your planning and forecasting by understanding the sensitivity of key forecast driver
Download the table of contents
Subscribe to RSS Feed