What does Mexico’s deepwater auction mean for the upstream opening?

On 31 January, Mexico awarded 19 out of 29 deepwater blocks on offer across three areas – the Perdido area, the Mexican Ridges province, and the Campeche Deep Sea Basin/Salina Basin. Total work commitments from the 23 wells bid are estimated at USD1.4 billion, and there were two tie-break bonus bids that resulted in a cumulative USD525 million offered to the state. A total of 39 bids were made for the 19 blocks awarded. The most aggressive bidders in the round were Shell, Repsol, PC Carigali (Petronas), new entrant QPI (Qatar Petroleum), and Mexico's national oil company (NOC) PEMEX.

The aggressive bidding of these companies, especially on the part of companies with existing positions, appears to be aimed at seizing a clear window of opportunity to secure material assets under competitive contractual and fiscal terms in order to grow their long-term portfolios in Mexico. IHS Markit assesses that there is a medium risk of a halt on new exploration and production (E&P) opportunities in Mexico over 2018–24, stemming from a potential victory for left-wing populist Andrés Manuel López Obrador in the July 2018 presidential election. López Obrador opposes foreign investment in Mexico’s upstream sector and continues to lead most polls. Even if bid rounds are held through 2018-24, they could be scarce relative to the numerous upstream opportunities offered over the past several years and could feature comparably less competitive E&P terms. 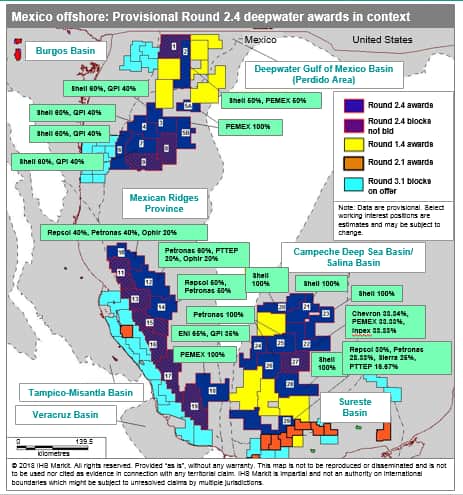 Importantly, the Round 2.4 investment commitments – in addition to the investments committed as part of Mexico's previous bid rounds and PEMEX's farm-outs – will help to shore up foreign upstream activity through the medium term. This will bolster the upstream opening over the longer term – regardless of any restrictions that may be applied toward international oil company (IOC) investment following the seating of a new presidential administration in December 2018. In the meantime, IHS Markit expects the authorities to expand and accelerate E&P opportunities through the end of this year. Upcoming auctions – Round 3.1 (shallow water) and Round 3.2 (onshore), currently scheduled for March 2018 and July 2018, respectively – could be adjusted to include new areas based on investor feedback.

PEMEX will likely continue seeking upstream partnerships over this year due to the real possibility of a scale-back or halt on new upstream investment opportunities. The NOC is expected to ramp up its farm-out offerings to coincide with forthcoming bid rounds. Farm-outs provide a critical vehicle through which PEMEX can generate near-term cash flows from asset sales while reducing its own capital exposure. Farm-outs also hold the promise of longer-term benefits including knowledge transfer from qualified partners and future discoveries enabled through external capital and expertise.

IHS Markit Petroleum Economics and Policy Solutions (PEPS) Oil and Gas Risk analysis suggests that Mexico is currently competitive within Latin America for onshore upstream entry terms and conditions (as measured by the following risk factors: State/NOC Role, Government Take, and Expeditiousness of Contract). However, Mexico is less competitive within the region for onshore upstream operations (as measured by the following risk factors: Regulatory Burden, Civil Society Risk, and Facility and Personnel Violence) due to challenges associated with local communities and violent risks. With respect to physical security challenges, PEMEX reported 10,363 illegal pipeline "taps" or instances of siphoning for the entirety of 2017 – breaking the record of 6,537 such taps for 2016. The NOC estimated financial losses due to fuel theft at roughly USD1.5 billion for 2016. In January 2018, PEMEX's chief of installations security for the Salamanca zone in Guanajuato state was shot and killed, underscoring the violent risks facing oil-sector personnel. 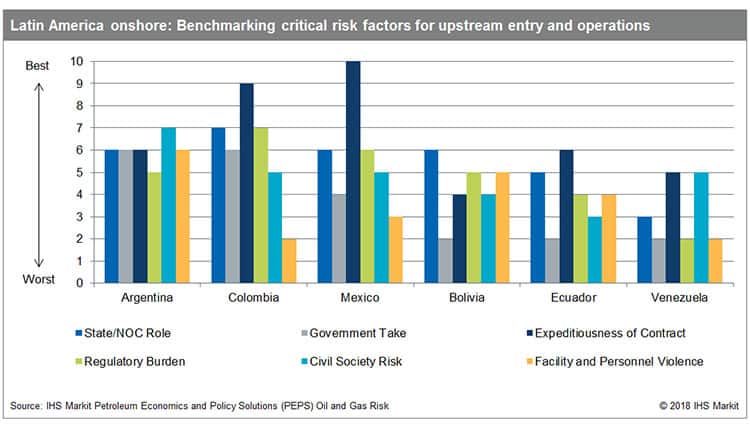 Michael Dyer is an Upstream Technical Research Director and Advisor. He is responsible for the upstream content of Brazil, Mexico, Paraguay and Uruguay.