UK economic growth revised down, in line with PMI

The economy grew less than previously thought in the final three months of 2017, and a further slowdown looks likely at the start of 2018.

The official data show the pace of economic growth late last year to have been revised down from 0.5% to 0.4%. While even this revised fourth quarter performance on its own is by no means particularly disappointing, in year-on-year terms GDP was up 1.4%, which is the slowest pace seen for over five years. It also means that over 2017 as a whole the economy grew a modest 1.7%, which is the worst performance since 2012. 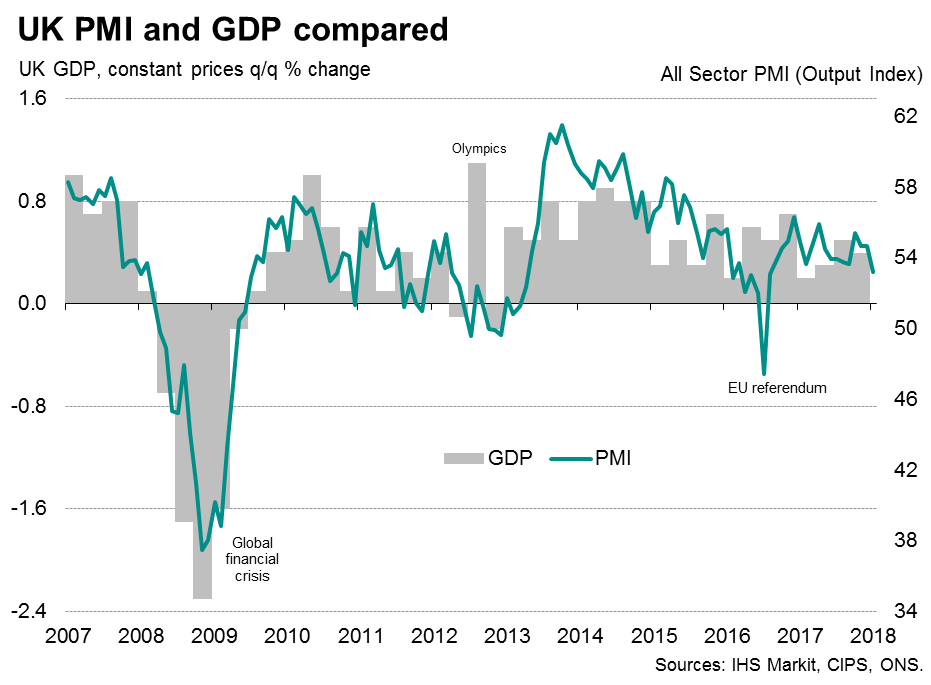 The downward revision brings the GDP expansion into line with the signal from the PMI surveys, which is notable because the PMI surveys indicate that further growth momentum was lost in January, when business activity grew at the weakest rate for almost one-and-a-half years. The PMI currently indicates that the quarterly pace of economic growth has slowed to 0.3%.

The biggest downturn in the fourth quarter was seen in the mining, oil and quarrying sector, which should be temporary, so some bounce-back should help the economy in the first quarter.

However, other areas of the economy look worryingly weak. Construction output fell 0.7%, less than the 1.0% previously estimated but still indicating that the building sector is technically in recession. Business investment was meanwhile flat, and household spending rose a modest 0.3%.

Survey evidence indicates that investment and construction are being subdued by heightened business uncertainty, generally linked to Brexit, while consumer spending is being hit by higher inflation.

Data such as the construction PMI and Visa spending figures suggest these trends persisted into the first quarter of 2018, as business uncertainty intensified and high inflation continued to eat into spending power.

The depreciation of sterling meanwhile showed few signs of benefitting the economy in terms of trade, with net exports in fact acting as a drag on the economy in the fourth quarter.

However, manufacturing continued to expand at a solid pace in the fourth quarter, as did business and financial services and transport and communications, helping drive the upturn in GDP. The worry is that, with the exception of financial services, survey data hint at these sectors also losing steam in January.