Turkey’s newly purchased hydrocarbon drillship Deepsea Metro II, intended for oil and natural gas exploration in the disputed area off the coast of Cyprus, arrived in Turkey on 2 January.

Turkey’s acquisition of the Deepsea Metro II, which it purchased from South Korea for USD210 million, came in response to Cyprus stepping up exploration and drilling operations in its exclusive economic zone (EEZ) around the island. Turkey disputes Cyprus’s internationally recognised EEZ, arguing that a substantial portion of it falls above the Turkish continental shelf (see map). Moreover, Turkey disputes Cyprus’s exclusive right to exploit the hydrocarbon resources around the island, insisting on the need for a hydrocarbon revenue-sharing agreement between the Republic of Cyprus and the self-declared Turkish Republic of Northern Cyprus (TRNC), which controls approximately a third of the island’s territory. 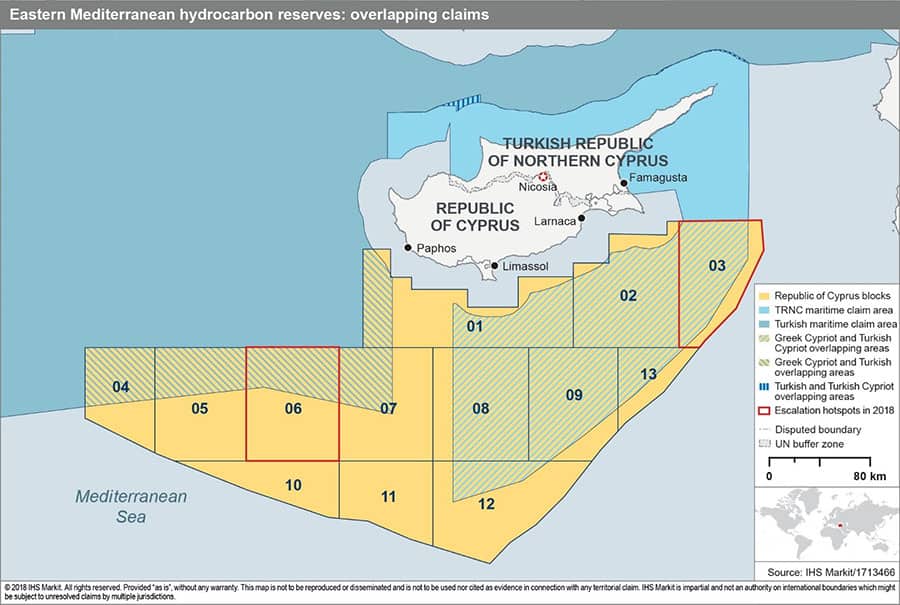 Cyprus enjoys wide support for its claims, including by major international players such as the United States and the European Union, as well as the major stakeholders in the Eastern Mediterranean. Already benefiting from its strong historical ties with Greece, Cyprus has also been strengthening its relations with Israel. In October 2017, an agreement was reached on laying a 1,500-km electric cable connecting the power grids of three countries. The following month, in a meeting involving their defence ministers, they announced their intention to deepen their trilateral defence co-operation, having already held joint naval exercises in March, June, and November. Finally, on 5 December, they signed a memorandum of understanding (MOU), which also included Italy and the EU’s European Commission, for the construction of the world’s longest underwater natural gas pipeline, which would carry Israeli and Cypriot gas to the European mainland, via Crete. Crucially, the route of this pipeline would bypass the Turkish mainland, undermining Turkey’s aspirations of becoming an energy transit hub. Notwithstanding, the feasibility of such a project remains questionable.

French energy company TOTAL, in partnership with Italy’s ENI, began exploration and drilling operations in Cyprus’s EEZ in July 2017. Turkey promptly responded by sending a frigate to monitor the drilling vessel in Block 11, while issuing a Notice to Airmen (NOTAM) and a Navigational Telex (NAVTEX) declaring its intention to hold military exercises, taking place partially in the Cypriot airspace and EEZ. Several other Turkish NAVTEXs, reserving areas within Cyprus’s EEZ, have since followed, including live-fire exercises in October.

The hotspot for a potential escalation is now Block 6, where Total and ENI started exploratory drilling in late December. Operations in this field are particularly likely to cause an escalation in tensions, as Turkey lays claim to the northern portion of the plot. Turkey has already responded by issuing a NAVTEX, in what has become a customary move. On this occasion, however, it has reserved 41,000 square kilometres of the island’s EEZ, encompassing each of the 13 offshore blocks either partially or entirely, in what is a substantial increase in the scope of the disruptive tactic.

Turkey is now planning to initiate drilling operations of its own in Block 6, using its newly acquired Deepsea Metro II drilling vessel. A key indicator for Turkey’s intent to engage in military brinksmanship will be whether, when Deepsea Metro II starts sailing to Block 6, it is escorted by the Turkish navy. Significantly, Turkey has retained in the Eastern Mediterranean some naval units that participated in NATO’s Standing Maritime Task Force exercise in November, rather than returning them to their bases in the Aegean or the Black Sea. These include the Turkish navy’s TCG Gediz and TCG Barbaros frigates; the TCG Kalkan, TCG Mizrak, TCG Bora, and TCG Meltem gunboats; the TCG Akar fuel tanker; as well as four underwater commando teams. Another hotspot later in 2018 is likely to be Block 3, licensed by ENI and Kogas, to which TRNC also lays claim.

Another factor raising the risk of Turkish brinksmanship is the high likelihood of Turkey’s upcoming presidential election being called early, for 2018. In this scenario, Turkish President Recep Tayyip Erdoğan would be likely to deliberately escalate the stand-off with Greece and Cyprus, with a view to rallying his domestic nationalist support base.

The risk of escalation in 2018 is more elevated than in previous iterations of the Eastern Mediterranean hydrocarbon dispute. This is due to the increased likelihood of discoveries being made, as well as the exclusion of Turkey from the preliminary plans to build the aforementioned Eastern Mediterranean pipeline.

Stand-offs between the navies of the rival countries, particularly involving Greece and Turkey, could well extend to warning shots being fired, particularly inside Cyprus’s EEZ, where the Greeks and Cypriots would feel in a stronger position under international law. An escalation involving targeted fire, however, remains unlikely. For instance, in 2014 the Turkish government gave the Turkish navy permission to “to harass but not to hit” vessels in Cyprus’s EEZ after a similar row regarding hydrocarbon drilling. An escalation in the Eastern Mediterranean would be likely to have a spill-over effect to the Aegean Sea, where similar incidents would be likely to occur between the Greek and Turkish navy and air forces.

Further NAVTEXs covering other blocks where exploration and drilling are due to begin, such as Block 10 (Exxon Mobil/ Qatar Petroleum), would signal Turkish intent to use its military to interfere with operations, even in areas of Cyprus’s EEZ to which it does not stake a claim. This is likely to cause disruption to shipping routes passing near the island. Moreover, there is a risk of Turkish harassment targeting vessels travelling between the drilling sites and onshore support bases in Larnaca and Limassol, including arbitrary inspections of vessels, potentially resulting in temporary detention of the vessels and their crews.

There is an elevated risk that companies that have won offshore exploration licences from Cyprus will see cancellations of any existing contracts that they have in Turkey, as well as being blacklisted from future tenders. These include Italy’s ENI, the US’s Exxon Mobil, France’s Total, and South Korea’s KOGAS. In July 2017, President Erdoğan warned oil companies taking part in Greek Cypriot exploration efforts that they risked “losing a friend”. There is precedent for the Turkish government taking retributive action. In 2013, following a previous round of confrontations over hydrocarbons in the Eastern Mediterranean, Turkey blacklisted ENI, resulting in the latter being blocked from participating in the near-complete TANAP project.