Top US Regional economic predictions for 2018

The US economy entered 2018 on a solid footing, and we expect that positive momentum to continue through the year. The prospects for regional economies are fairly bright, with strong consumer fundamentals and persistent growth in the housing market.

The South and West will have the country's hottest job markets and compete for best in show. Employment growth in the South and West has outstripped the Northeast and Midwest over the last several decades, outside of the dramatic 2008-10 housing correction. Since 2010, the South and West have returned to robust expansion, although the growth dynamic between them is changing. Since 2012, average annual employment growth in the West (2.4%) has comfortably outpaced the South (2.0%), in part because the housing crash and subsequent recovery were most impactful in the West. That region saw much larger increases in construction employment and home price growth from 2012 onward compared to its southern counterpart. Furthermore, the economic damage from the recent oil-price correction was concentrated in the South, particularly Texas, which hampered job prospects there over 2015 and 2016. That trend began to change in 2017, however. The housing recovery in the West is naturally losing steam after years of robust growth. Two key sectors in the West economy, professional and business services and information, also saw hiring slow in 2017, driven in part by a cooling high-tech sector. Meanwhile, the energy industry recovered in late 2016 and was a significant stimulus for the South during 2017.

Job growth in the South and West will converge in 2018 or at the very least remain in a tight band. By the fourth quarter of 2018, job growth will be 2.0% year on year (y/y) in the South and 1.9% in the West, ahead of the US average of 1.7% and well ahead of the combined Northeast and Midwest (1.2%). The top job markets in 2018 will be spread across the two strongest regions: Arizona, Nevada, Utah, Texas, and Florida (see map). Of these, Texas and Florida are the two largest by far and are driving the South's move to the head of the pack.

Migration to the South and West will lead to population declines in three states. With booming economies and favorable weather, the South and West will continue their trend of luring residents from the rest of the country. This year, we predict Wyoming, West Virginia, and Illinois will experience population declines. All three states have been struggling economically and experienced out-migration in 2017. Illinois saw the most net out-migration of any state from 2016 to 2017, as a net total of 81,000 people left-indeed, so many residents departed that Illinois lost its ranking as the fifth-most-populous state, falling to sixth, behind Pennsylvania. Residents are leaving the Land of Lincoln in droves because of the economic malaise, high tax rates, high cost of living, and growing share of retiring boomers escaping the cold climate. West Virginia's declining coal industry and limited economic future similarly incentivized out-migration there. West Virginia's population is older on average and has struggled with outmigration in its working-age population; as a result, West Virginia experienced a "natural" population decrease last year, where deaths outnumbered births.

Idaho will be the fastest-growing state in 2018, attracting migrants looking for better economic opportunity who want to avoid the high cost of living on the Pacific Coast. Following Idaho are Utah and Nevada; Utah's high birth rate is driving its population increase, while snow birds flock to Nevada. Florida will be the fourth-fastest-growing state, with the largest total in-migration, attracting 282,000 new residents. In addition to its strong economy, Florida's popularity as a retirement destination is attracting ever-larger shares of aging boomers. We also expect a bump in migration over late 2017 and into 2018 from Puerto Rico due to the devastation caused by Hurricane Maria. Florida will receive the largest share of these migrants, along with other states that have concentrated Puerto Rican populations such as Pennsylvania, Texas, New York, and New Jersey.

After nearly a decade, Detroit (and 13 other places) will finally recover recessionary job losses. It has been a long climb back from the 2009 end of the Great Recession for a number of geographies. By the end of 2017, 46 states had returned to their pre-recession peak employment levels; the United States as a whole fully recouped its losses during the first half of 2014. Two states, Mississippi and New Mexico, will reach that milestone in 2018, leaving just two more-Connecticut and Wyoming-that still remain in deficit.

Meanwhile, 12 metros will also recoup all their recessionary job losses in 2018, bringing the metro return-to-peak total to 289 out of 383. Detroit, Michigan, is the largest and most noteworthy, and since 2009 has in fact experienced its longest and most robust period of sustained job growth since the 1990s. Burlington, North Carolina; Columbus, Georgia; Palm Bay, Florida; Sebring, Florida; Staunton, Virginia; and Valdosta, Georgia will also gain back all their recessionary losses in 2018. While these metros are in the typically fast-growing Southeast region, they all experienced devastating manufacturing losses or a severe housing correction during the recession, which delayed their recovery. Albuquerque, New Mexico; Battle Creek, Michigan; Janesville, Wisconsin; Fond du Lac, Wisconsin; and Syracuse, New York round out the list.

Retail trade hiring will continue to be weak across the United States, with the Northeast and Midwest experiencing declines; hiring in transportation and warehousing will remain robust. US employment growth in the retail trade sector was moderate in the years following the recession, averaging annualized gains of 1.5% since 2011, but slowed over 2016 and even more so in 2017. Gains were meager in 2017 (up just 0.2%) as consumers increasingly turned to online retailers and traditional brick-and-mortar outlets continued to close amid lower foot-traffic. Wider use of self-checkout technologies is also reducing the need for retail staff. Weak payroll growth in retail trade will persist into 2018. While retail trade is not a high-paying industry, it does account for a large share of employment (11%) and is an important industry for low-skilled and part-time workers. States in the Northeast and Midwest will be the most affected because of lower population growth and unfavorable demographic shifts.

On the other hand, the robust growth in the transportation and warehousing industry will help soften the blow from weaker retail hiring. Nationwide, the sector has expanded at an average annual rate of 2.9% since 2011. As consumers demand increasingly quicker delivery times, retailers have invested in distribution facilities near large population centers that take advantage of transportation networks. Firms like UPS, FedEx, DHL, and now Amazon have located air and land transportation hubs in Kentucky and Tennessee that take advantage of their central locations in the United States. These investments will fuel further payroll growth in the region into 2018. The faster-growing South and West regions will experience the biggest gains, but the rate of transportation and warehousing hiring will exceed total job growth in every region in 2018.

The ramifications of new US tax laws will shake up growth leaders in regional real estate markets. The Tax Cuts and Jobs Act will lower the tax liabilities of many individuals over the next several years, but caps placed on deductions for state and local taxes (SALT) paid could increase total tax payments for high-income households in states with higher property and income taxes, particularly in the Northeast and California. Within those states, the effects will be felt most in metros with higher incomes and property values, such as San Jose, San Francisco, Washington, DC, and New York City.

Shortages of existing homes for sale will continue to drive strong price gains in urban markets; however, the new caps on mortgage interest deductions and SALT deductions will muddy the waters among the leaders in metro area price growth. Among the 100 largest metro markets, we forecast that Las Vegas will take the top spot this year, with 7.3% y/y growth in the fourth quarter. Metros in states with no personal income tax such as Nevada and Florida will become even more attractive locations as tax deductions in other states dwindle. In contrast, New York, Los Angeles, Seattle, San Francisco, and Washington, DC, will experience a deceleration in home price growth in 2018. 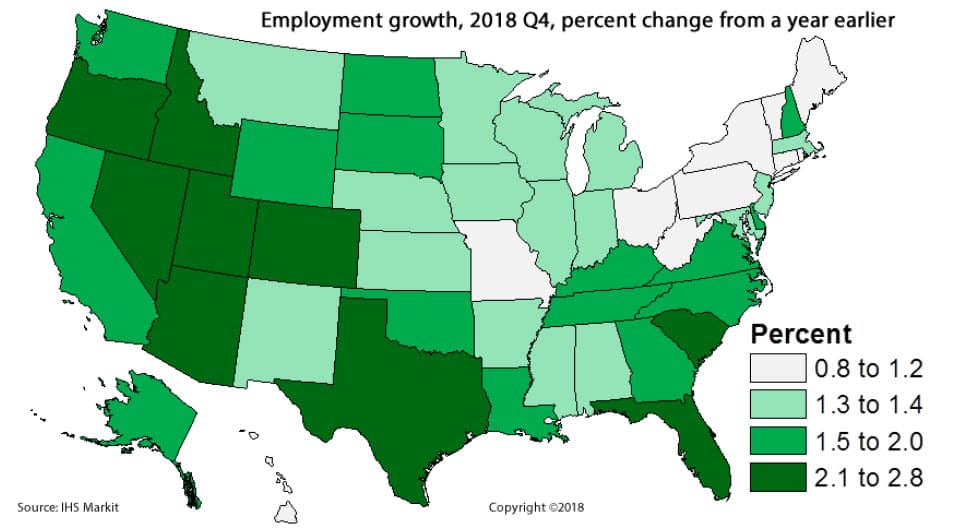