Terrorism risks in Europe are likely to increase in 2018 as foreign fighters depart the former ‘Caliphate’ in Iraq and Syria and bring their training and expertise back to the continent, according to a new report released today from Jane's Terrorism and Insurgency Centre (JTIC). “In the five- to 10-year outlook, European countries will face an elevated terrorism threat posed by radicalized convicts, returned foreign fighters and other returnees who have direct ties to the legacy of the Islamic State,” said Otso Iho, senior analyst at JTIC.

Growing numbers of Islamist convicts are likely to exacerbate the risk of radicalization in prisons. Additionally, many of those imprisoned for providing support to groups like the Islamic State in the past two years will probably be released between 2019 and 2023, according to data analyzed by JTIC.

Key findings of the report

In addition to the immediate and direct security threat posed by returning foreign fighters, a significant risk is likely to emerge through their potential to transform and radicalize existing Europe-based Islamist networks.

“Foreign fighters are likely to hold substantial credibility in Islamist networks that are already prone to support groups like the Islamic State,” Iho said. “Their input and leadership could plausibly move groups that have previously held a supportive role – financing, facilitating travel, spreading propaganda – to adopt an operational one: setting up cells, acquiring weapons, providing facilities and safe houses for explosives building, and recruiting militants for attacks in Europe.” 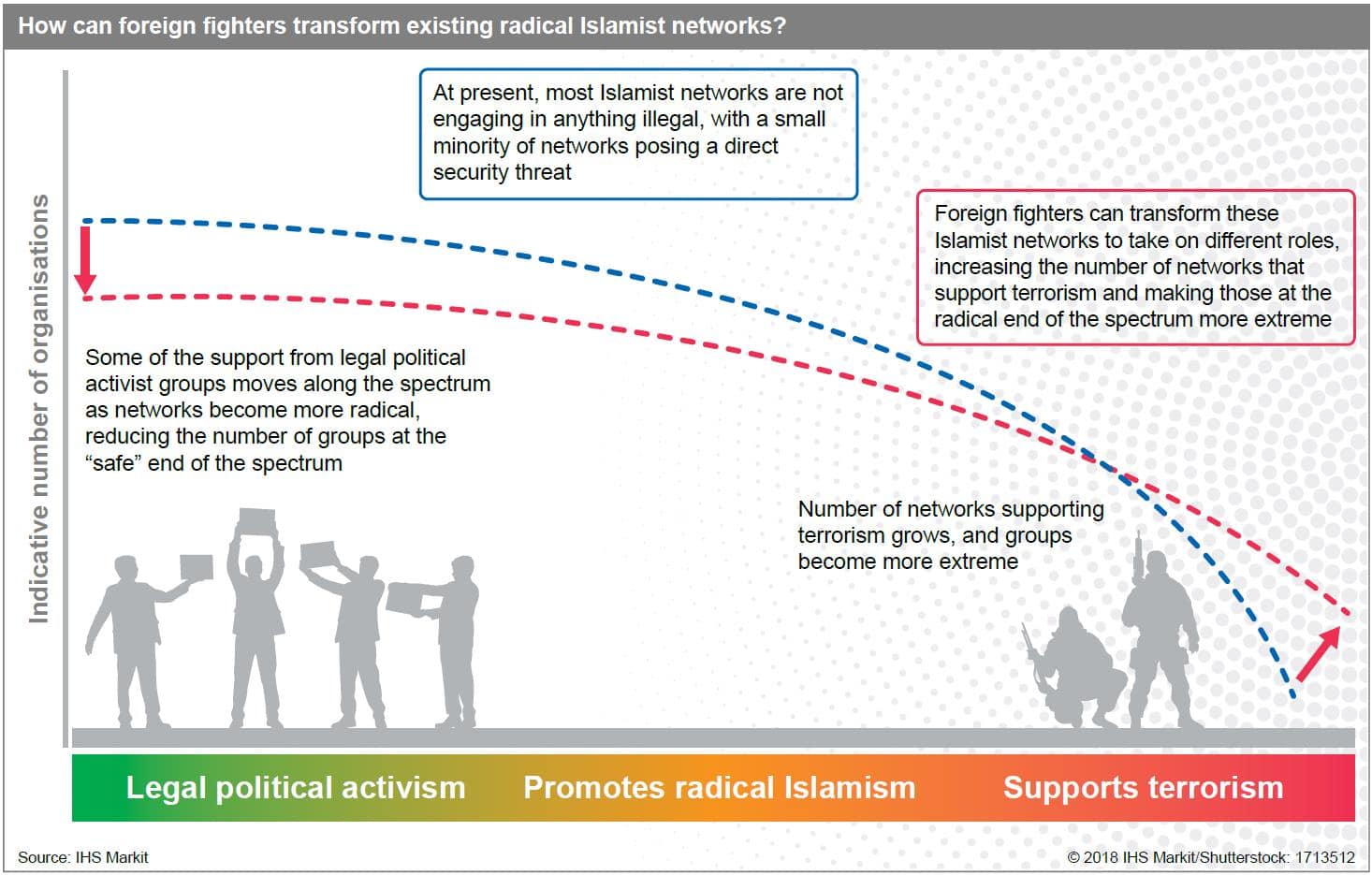 “Foreign fighters returning to Europe will provide critical skills that will help an increasing number of operational Islamist networks conduct more complex attacks,” Iho said. “These skills include the construction of viable IEDs - learned in Iraq and Syria where the Islamic State has produced IEDs on an industrial scale - expertise in assault weapons, and the use of new weapons types or technologies such as drones.”

The successful use of car bombs or suicide attack car bombs by Islamist militants on European soil would mark a notable increase in the threat level. There are indicators that some cells have already attempted to adopt this method, including the perpetrators of the August 2017 attack in Barcelona, Spain. Returned militants will increase the likelihood of the successful execution of such an attack, due to relevant skills learned within the Islamic State’s ‘Caliphate’.

JTIC’s analysis of European prison sentencing reveals that between 2019 and 2023, a substantial number of terrorism convicts who have been active supporters of Islamist militant groups but in most cases have not taken action to plot or conduct attacks in-country, will be released from prison. As foreign fighters return and militant Islamist activity continues, this trend is likely to accelerate.

“Though it is too early to make definitive conclusions based on available data of returned foreign fighters, harsh sentencing practices in host countries do not necessarily appear to be a significant disincentive for foreign fighters returning from Iraq and Syria,” Iho said. “The UK is an example of this trend, where despite ample precedent and prison sentences for returnees, it has the highest number of returned militants in Europe with around half having come back,” Iho said. “For those returnees planning on engaging in violence, the symbolic target value of Western European countries perhaps outweighs the higher likelihood of being apprehended and imprisoned.” 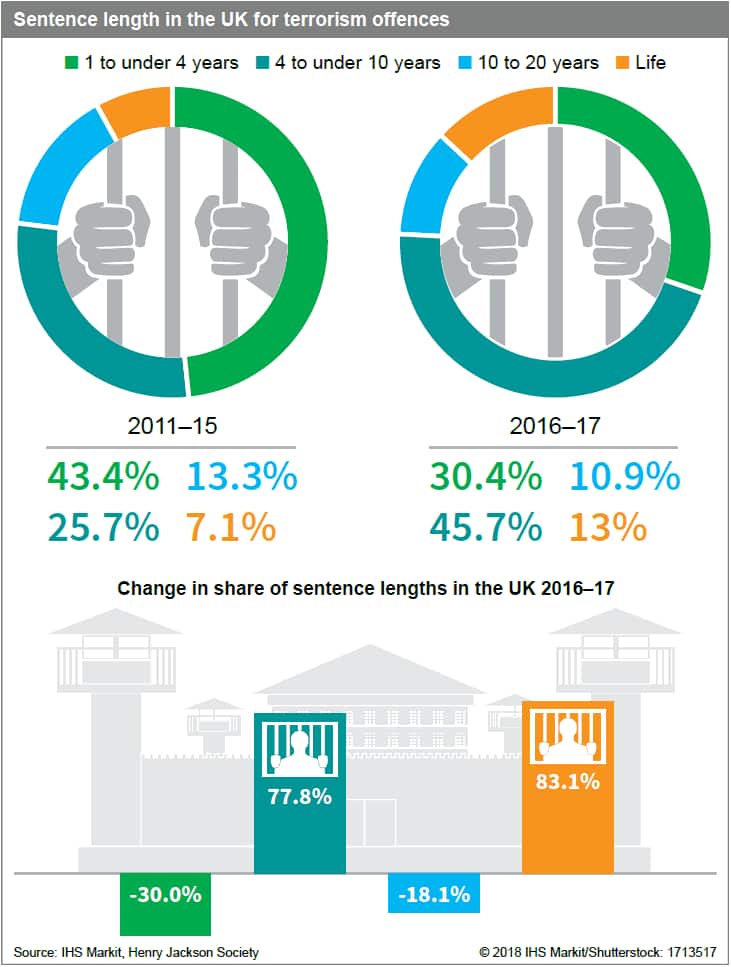 Since the 2015 attacks in Paris, counter-terrorism legislation across Europe has been harmonized substantially, and on a legislative level most countries are equipped to deal with returnees in a ‘hard’ manner i.e. imprison those who have committed terrorism offences or pose a clear security risk. In practice, however, enforcement of these laws varies somewhat from country to country based on their experience of terrorism: countries such as the Nordics, which have had lower terrorism exposure, tend to have more lenient sentencing.

Jane’s Terrorism and Insurgency Centre (JTIC) by IHS Markit uses open source data to build its global database of both attacks by non-state armed groups, in addition to counter-terrorism operations and key statements by state and non-state actors. The database enables users to search by location, target, group (active and dormant), tactics and casualty numbers in order to quickly obtain actionable intelligence and/or data. The database includes over 250,000 events since 2009 and tracks over 1,000 separate non-state armed groups worldwide.

Get in touch to learn more about JTIC and other solutions from Jane’s.