This article by Greg Knowler originally published on JOC.com.

Surplus capacity coming into the market and demand growth unlikely to match supply appears to have placed a restraining hand on Asia-Europe contract rate levels even as carriers prepare their financials for what will probably have been a profitable 2017.

Many direct shipper/carrier and carrier/forwarder contracts on the Asia-Europe/Mediterranean trades run from Jan. 1, and early indications are that rate levels for 12-month contracts are being secured at the same or slightly below the levels settled at in 2017.

This comes after carriers across the board reported solid third-quarter profits on the back of strongly increasing container volume and spot rates that were above the levels recorded during the same quarter in 2016. 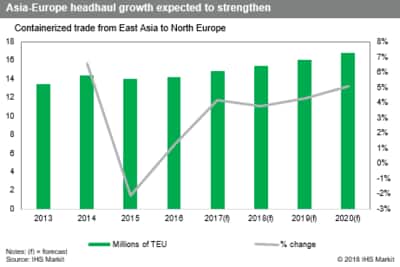 Enjoying profitability not seen since the late 2000s, carriers initially pitched their services at contract rate levels that were above those of 2017. A forwarder on the Asia-Europe trade said he finalized the carrier tendering rounds in late December and ended with a 12-month contract from the whole of Asia to the whole of Europe at $770 per TEU, based on the lowest cost and best service of eight bidding carriers.

The forwarder said at the completion of two tender rounds that the service contract rates were 7 percent lower than in 2017, despite carriers initially pricing the first round of tendering at 7 percent higher than the rate fixed in 2017.

Still, the $770 per TEU 12-month contract is well below the latest Shanghai Containerized Freight Index spot rate from China to North Europe that reached $888 per TEU on Jan. 5, suggesting that with the overcapacity burden, carriers are not confident that rates will increase much through the year. JOC.com’s upgraded Market Data Hub will be tracking those weekly rate movements on the major trades.

The supply chain head of a German shipper said after completing his tendering process he was not impressed with the carriers. “Contract rates went up a bit compared to last year, but no new tech services are being offered to improve overall service levels. They can’t even properly provide the space,” he complained.

More than 60 percent of his container volume out of Asia will move under contract in 2018, with the volatile spot market always a concern. “I start to get the feeling that the next couple of weeks will be an issue but after that it is going down all the way,” he said.

In a note to customers, Jefferies said freight rates and load factors historically rebound four weeks before Chinese New Year and weaken for the four weeks following China’s main holiday. This year the Lunar New Year begins on Feb. 15, later than usual, and could extend the peak shipping period.

Data from IHS Markit, parent company of JOC, show that container volume growth on Asia to North Europe and the Mediterranean will strengthen through 2018, increasing by about 4.5 percent compared with 2017. However, the global container fleet is on track to grow faster, even after scrapping is taken into account and a quarter of the capacity is delayed. IHS Markit predicts demolitions in 2018 will total 351,065 TEU, which would result in net capacity growth in the global fleet of 7.1 percent if there is no delay in the deliveries of 78 mega-ships of 10,000 TEU and above, totaling 1.2 million TEU. 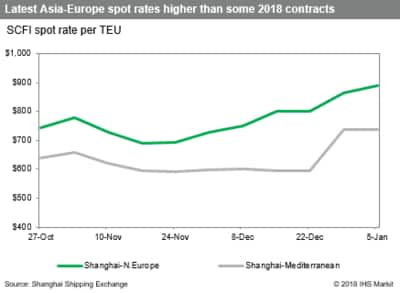 SeaIntel estimates that deployed capacity in the first quarter will grow by 4.4 percent on Asia-Europe, but this will be exacerbated as carriers start taking ownership of the ultra-large container vessels currently on order. On the Asia-Mediterranean trade, the first quarter capacity growth will be 7 percent.

The capacity increase takes into account the withdrawn sailings announced by carriers for the slow Chinese New Year period as they try to manage the supply-demand balance, but SeaIntel said even with healthy demand growth, carriers were likely to experience a tougher start to 2018 in terms of freight rates.

BIMCO shipping analyst Peter Sand said profitability was up for grabs across the container shipping industry if demand growth remained in the region of 4-5 percent and actual fleet growth was handled with care. The world's largest shipping association expects the container shipping segment to see a net fleet growth of around 4.1 percent in 2018, leaving little room for fundamental market balance improvements.

“As a result, increased earnings must come from continued cost-cutting exercises and permanent slow-steaming to keep fuel costs on a tight leash,” Sand said in BIMCO’s shipping outlook. He said operational efficiency gains and positive demand growth would be needed to place more boxes on individual ships and achieve the economies of scale the industry relied so heavily upon.

Although carriers try to match supply with demand, shippers have long been searching for the right balance between contracted cargo and the spot market. A regular complaint is that the long-term fixed rate is seldom competitive, while short-term spot rates come with no space commitment. And having a contract does not always guarantee the smooth transport of cargo. In a JOC.com survey of shippers, a major pain point was that even with a service contract, cargo was still subject to rolling.

Maersk Line CEO Soren Skou said during a results announcement in 2017 that the contract to spot market share on Asia-Europe was about 50:50. Not all of the cargo moves under 12-month contracts, with three- and six-month contracts also common on the trade. 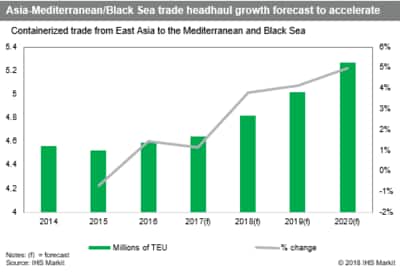 Singapore-based APL said it was seeing an increase in BCOs securing long-term rates, and although the carrier said the feedback from its customers on the rate levels negotiated was “mixed”, a spokesperson said it was generally satisfied with the outcome of contract talks.

SeaIntel noted that on the Asian export trades, the fourth quarter saw a marked weakening of rate levels. “Not only does this imply that the fundamentals appear to have been too weak to support the high spot rate levels we have seen for much of 2017, it also clearly indicates that we might expect a weakening of financial results for the carriers in [the fourth quarter], driven by a weaker freight rate environment,” the analyst said.

Several carriers have also announced rate increases on Asia-Europe and Asia-Mediterranean routes from mid-January, led by Hapag-Lloyd. The German carrier has set its freight-all-kinds rate on Asia-North Europe at $1,150 per TEU, and at $1,500 per TEU on Asia-Mediterranean, levels not seen in well over a year.