Short demand on the rise in Europe

Short demand on the rise in Europe

Short demand for EU equities has continued to increase in early 2018, a trend which started in March of last year. In dollar terms the current short position is $188bn, just below the post-crisis high of $193bn observed on February 16th. 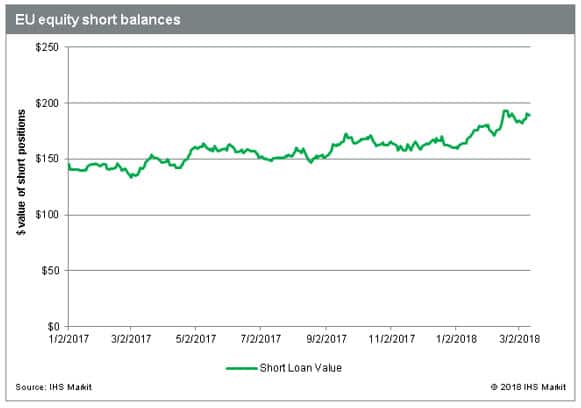 Among the ten largest securities lending markets, Spain has seen the largest YTD increase in short demand, both as a percentage of total market cap as well as in nominal terms. The Spanish stocks which most contributed to the increase were Siemens Gamesa Renewable Energy and Abertis Infraestructuras Sa.

The only countries in the EU with declining short demand in 2018 are Poland, Portugal, Hungary and Turkey. The combined decline of those four is only $300 million, compared with an overall increase of $28 billion throughout the EU.

Taking a sector view of the EU reveals some interesting trends. Stocks in the Materials industry have seen the largest YTD increase in short demand, both by percentage of market cap and nominal value. Part of that increase is Anglo American, where a large portion of short positions are known to be a hedge against convertible bonds sold to help Indian billionaire Anil Agarwal acquire shares in the firm. That is only part of the story, however, as Materials would have still notched the largest nominal increase even without the nearly $1bn increase in Anglo American.

Putting AAL aside, the next two largest short demand increases in Materials were for shares of Lafargeholcim and Glencore.

On the flip side, it’s interesting to note that Retailing is among the industries which have seen the largest YTD reduction in short demand. The retail sector has been out of favor in recent years, so while the reduction in short demand is coming off a relatively high base, the exit of some short sellers may suggest the easy profits may have been had. A similar story is emerging in the Commercial and Professional Services industry where, for example, the price decline in Capita has seen both market cap and short demand decline by 50% YTD. Given that Capita made up a much larger portion of total short demand than total market cap, the decline in valuation puts downward pressure on short demand as a percentage of market capitalization.

Machine learning has revolutionized a wide array of computationally intensive modelling tasks. Learn how we have ap… https://t.co/jM2UjvqhUT

Read the recent blog post by our own Marjorie Chee where she shares best practices for reversing rising compliance… https://t.co/2h8GcT2v0V

Introducing the first edition of our Fixed Income In-Focus series where we examine global fixed income trends and a… https://t.co/gQUOcsOVcV

We're excited to announce the July launch of our Investor Relations platform - Capital Access. The intelligence an… https://t.co/Usr6fbIvXu