As the global economy continues to recover following the lockdown-induced decline in activity earlier this year, PMI sector data shed light on which industries are rebounding at the quickest pace.

The PMI rankings for broad industry sectors in October revealed strong performances for Financials, Basic Materials and Consumer Goods, each of which registered quicker-than-average activity growth. Meanwhile, Consumer Services remained the worst performing sector, recording a ninth consecutive monthly contraction in output. The only other market segment to see a reduction in activity was Telecommunications Services, while the remaining three categories, namely Healthcare, Industrials and Technology, posted modest expansions. 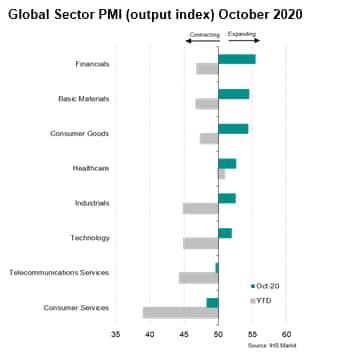 More granular PMI sub-sector data provide insight into the driving forces that contributed to the strong performances across Basic Materials, Consumer Goods and Financials in October.

The rise in activity for the Basic Materials sector was predominantly supported by Chemicals producers. However, the industry expansion also received some support from Resources, which was in turn centred on Metals & Mining. Meanwhile, Forestry & Paper Products production stagnated.

Within the Consumer Goods industry, Automobiles & Auto Parts was the strongest performing sub-sector, while Food & Beverages producers lagged behind. The latter has continued to struggle amid a decline in hospitality and leisure activity since the onset of the pandemic. Meanwhile, manufacturers of Household & Personal Use Products recorded output growth that was broadly in line with the wider Consumer Goods average. 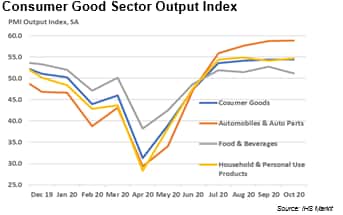 Growth in the Financials sector was largely centred on marked increases in activity for Banks and Real Estate companies. The other two monitored financial services sub-sectors, namely Insurance and Other Financials, posted moderate expansions. 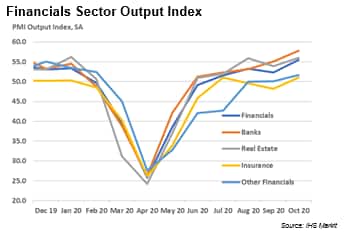 US lags in Basic Materials, but leads in Financials

Although the Basic Materials, Consumer Goods and Financials industries expanded sharply at the global level during October, growth rates varied substantially between regions.

For Basic Materials, increased activity was predominantly driven by European and Asian companies, with the latter posting the quickest output expansion since December 2010. Meanwhile, despite recording the fastest rate of growth since January 2019, Basic Materials firms in the US posted a far softer rise in output than the global average. 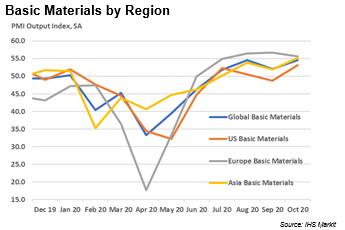 In the Financials industry, however, US firms were by far the strongest performers, recording the quickest output expansion for over six years. Asian Financial businesses saw solid activity growth, but in Europe there was a marginal decline.

Meanwhile, in the Consumer Goods sector, European businesses registered a far quicker expansion than in Asia and the US for the fourth month running. 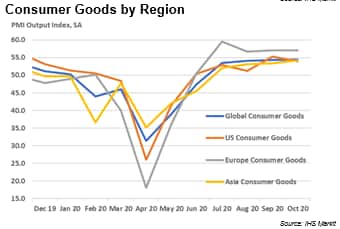 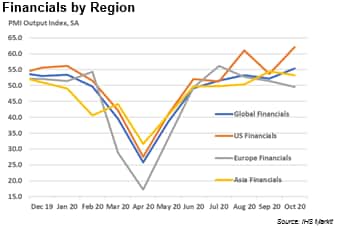 Going forward, PMI sector data will continue to provide a timely indication of how different segments of the global economy are dealing with COVID-19 pandemic. The next release of global PMI sector data is on the 4th of December 2020.