New vehicle sales in South Korea increased 8.7% year on year to 133,527 units in January, mainly due to solid performances by Hyundai, Kia, and SsangYong, as well as strong demand for imported passenger vehicles.

New vehicle sales in South Korea, including passenger vehicle imports, grew 8.7% year on year (y/y) during January to 133,527 units, up from 122,884 units in the same month of 2017, according to a report by the Yonhap News Agency, the Korean Automobile Importers' and Distributors' Association (KAIDA), and data compiled by IHS Markit. 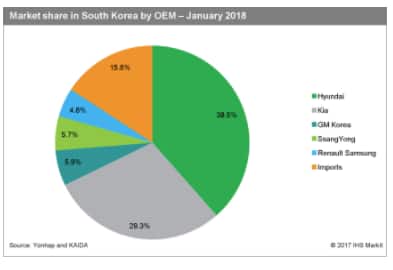 The surge in imported passenger vehicle sales during January was mainly thanks to a low base of comparison because of the ongoing stop-sell order on Audi and Volkswagen (VW) brand vehicles since August 2016, as well as increased supplies of popular brands and aggressive promotions. The stop-sell order triggered a 95.7% y/y slump in VW Group's light-vehicle sales in South Korea to just 1,245 units in 2017, according to data released by the KAIDA. Zero VW-brand vehicles were sold in the country last year, while Audi sales plunged 94.3% y/y to 962 units. The remaining 283 units came from the Bentley and Lamborghini brands. Meanwhile, Audi VW Korea restarted sales of three Bentley models in the country last year. It has also started sales of the new Bentley Bentayga sport utility vehicle (SUV) in South Korea. In November 2017, the group resumed sales of its Audi R8 sports car. The group has also started the sales of VW-brand vehicles from this month with the launch of next-generation Passat sedan. The automaker also plans to resume sales of the Arteon sedan and Tiguan SUV in the country this year. IHS Markit expects VW Group sales in South Korea to grow to around 46,000 units in 2018, with Audi sales at around 18,000 units and VW-brand sales at around 27,200 units. The group is also expected to start Skoda-brand sales in the country this year. By 2020, VW Group sales in South Korea are expected to reach around 77,000 units, split between VW-brand sales of 41,500 units and Audi sales of 33,900 units.

South Korean OEMs are banking on new models to bolster sales in their home market. They have either launched or plan to bring out a raft of new models in 2018. According to IHS Markit light-vehicle sales forecast data, around 65 new or refreshed models will be launched in the country this year. Hyundai is expected to further benefit from the vehicles launched last year such as the Genesis G70 and Kona. The automaker also plans to launch the Nexo fuel cell electric vehicle (FCEV) in March. Meanwhile, the new Stonic SUV and Stinger GT four-door fastback sedan, along with the recently launched facelifted version of the K7 sedan, will drive Kia's sales this year. The automaker also plans to launch the revamped K3 compact sedan with its next-generation powertrain in South Korea this month.

Renault Samsung has added a gasoline (petrol) variant of the QM6 SUV and a special edition of the QM3 SUV to its line-up. The automaker has also launched a refreshed version of the SM3 sedan and 2018-model-year SM3 ZE electric sedan with longer driving range. Renault Samsung also plans to launch the Clio compact car and Escape multi-purpose vehicle (MPV) in the country, while SsangYong will benefit from the G4 Rexton and G4 Rexton Eurasia launched last year. The automaker has also launched the upgraded Korando Turismo minivan and Rexton Sports pick-up. SsangYong aims to register 6.2% y/y sales growth in South Korea to 110,000 units in 2018. 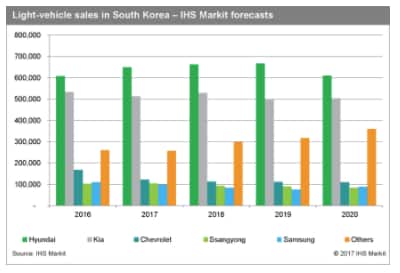 In a bid to revive its sales in the South Korean market, GM Korea launched a diesel variant of the Chevrolet Cruze sedan in November 2017. It also plans to bring the mid-size Equinox SUV and full-size Traverse SUV to South Korea in a bid to regain market share. GM Korea will also develop new mobility technologies and businesses such as car- and electric vehicle (EV)-sharing services. It aims to sell 5,000 units of the Chevrolet Bolt EV in the country in 2018 on the back of growing demand for EVs in South Korea.