With Systematic Internaliser (SI) obligations having taken on effect on 3 Jan 2018, most large dealers have already or are weighing the pros and cons of choosing to opt-in to the SI regime early, ahead of 1 September 2018 SI ESMA assessment based on trade volumes. As we have previously explained, deciding at which level of granularity to declare as an SI is complicated (see article).

Fortunately, ESMA has made things a bit simpler. The updated Transitional Transparency Calculation (TTC) for non-equities published on 6 December 2017, contains the transparency thresholds for ESMA-defined sub-asset classes (as defined under RTS 2) determined to have a liquid market as applicable as of the recent MiFID II adherence date of 3 January 2018. How does ESMA’s liquidity determination affect the level of granularity at which firms will opt-in as SIs for OTC products that are in scope of the pre-trade transparency requirements? In short, it lightens the burden.

A Point of Relief

Fortunately, ESMA’s liquidity determinations – at least for now – are relatively restrained. As pre-trade transparency requirements apply only for instruments determined by ESMA to be liquid, the most contentious, rule-intensive part of being an SI is a lesser burden to dealers opting into the SI regime for the time being, as pre-trade transparency applies only to a limited subset of instruments that are deemed liquid by ESMA. This limited requirement will hold true until ESMA performs a liquidity reassessment: this takes place in May 2018 for bonds and in April 2019 for derivatives.

How does ESMA’s liquidity determination affect a dealer’s decision on whether and at what level to opt in an SI? It has enabled dealers to opt-in to the SI regime at a higher level, at least initially. This means at the asset class or sub-asset class level for derivatives, for example – at least until ESMA’s liquidity classifications are re-assessed. For example, the listing of Index CDS on ESMA’s TTC site lists only two index CDS: (1) ITRAXX EUROPE 5Y, and (2) ITRAXX EUROPE CROSSOVER 5Y. An illustration for a dealer trading only the sub-asset class of “Index credit default swap (CDS)”, falling under the asset class of Credit Derivatives appears below. By opting into the SI regime at the entire sub-asset class level of Index CDS, as opposed to the Segmentation Criterion 1 (underlying index) level, the dealer performs some additional trade reporting to an APA, some additional reference data reporting for the Index CDSs not currently deemed liquid, but the pre-trade transparency is required only for those Index CDSs that are currently deemed to be liquid in the TTCs. The dealer’s counterparties benefit, knowing that it is an SI for all Index CDS, and will take on trade reporting obligations to an APA for all Index CDS traded off-venue or on a non-European venue.

Taking this into consideration, IHS Markit released the IHS Markit Systematic Internaliser Solution, an SI repository and dissemination utility, late last year. The phased increase in the levels of granularity supported by the offering is intentionally designed to mirror the regulatory timelines i.e. the timelines for the reassessment of ESMA’s liquidity determinations (as the next iteration of ESMA’s liquidity determination could increase the scope of instruments deemed liquid), and 1 September 2018, the date for which investment firms that not yet opted in to the SI regime may have to become SIs for the specific sub-asset classes where they breach the SI thresholds based on the volumes published by ESMA in August 2018.

For now, with the more onerous part of an SI’s obligations, pre-trade transparency, applying to a smaller subset of instruments for which ESMA has deemed liquid, dealers may take comfort in that the SI obligation of pre-trade transparency is less onerous than if the set of instruments deemed liquid by ESMA were broader. This reprieve makes broader sub-asset class SI opt-in a real consideration for firms rather than segmentation criterion SI opt-in. 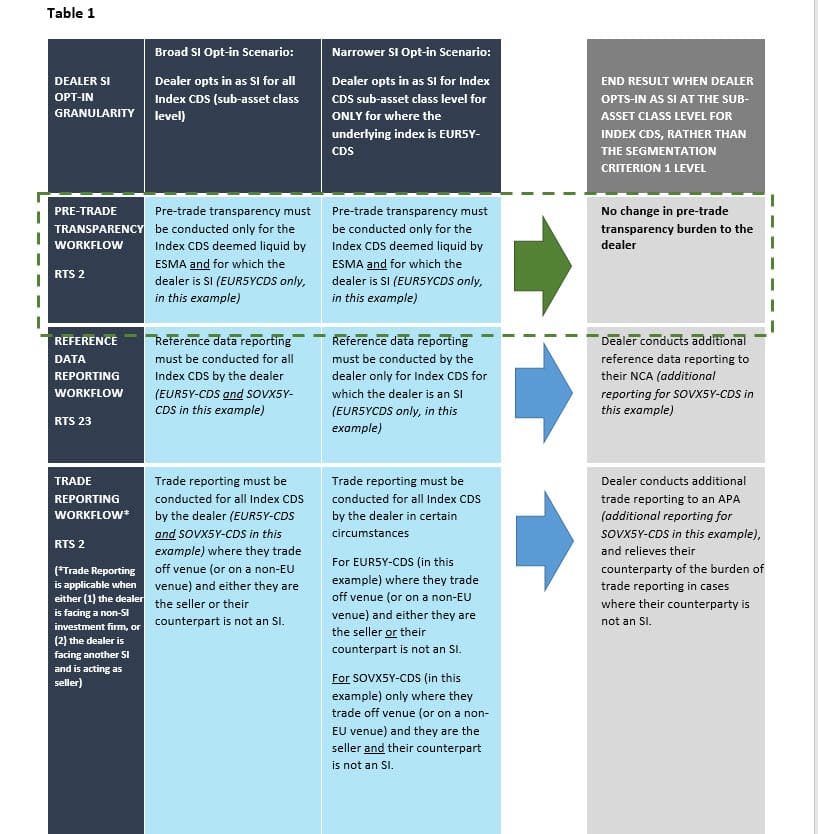