Jane’s analyses the Shahed 129 and Hamaseh

Jane's is uniquely positioned to deliver in-depth data and insight on military equipment in production and use across the globe, non-state armed groups and military capabilities. Below are the profiles of the Shahed 129 and Hamaseh, just two of more than 500 profiles of unmanned aerial vehicles available in Jane's. Find out more about Jane's.

The mutli-role Shahed 129 UAV is designed by Iran Aircraft Manufacturing Industries (HESA) in 2012 and is considered to be the Islamic Revolution Guards Corps (IRGC) programme. The UAV is primarily intended to perform C4ISR missions but can also be employed in attack roles mainly for deploying air-to-surface munitions. 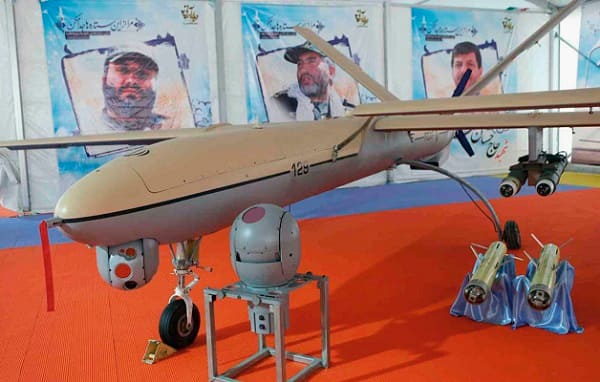 The weapons seen in the latest Iranian television footage of the Shahed-129 are similar, but slightly different from those previously displayed, including the ones seen here during an exhibition held by the IRGC on 11 May 2014. The Shahed-129 in this photograph is probably an early version as latter versions have retracting landing gear (khamenei.ir)

Guidance and control
The improved version of Shahed 129 has the option of housing Ku-band BLOS SATCOM and/or SAR/ground moving target indicatorsensor datalink dish to increase the aircraft's range and allowing it to be controlled from anywhere in the world.

Iran - undisclosed numbers have been acquired, may have produced more than 50 UAVs 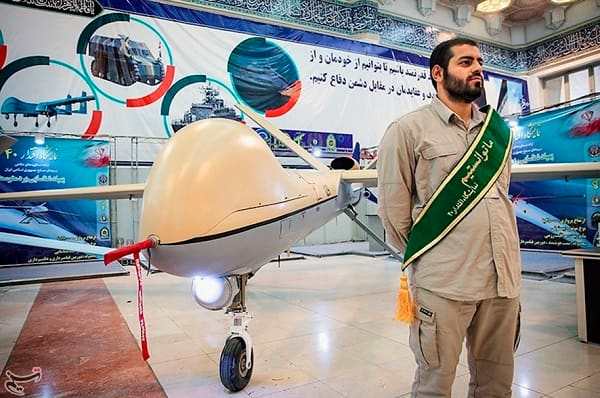 The Shahed-129 with the enlarged fairing, possibly for a SATCOM system (Tasnim News Agency)

22 August 2013: The Shahed 129 was identified by Jane's using satellite imagery taken on 7 March 2013 on the base Iranian island of Qeshm. Imagery suggested more aircraft were based at the airfield with a communications antenna at the western end of the airfield could be a ground-control facility.

August 2015:Shahed 129 crashed during the test flight on 11 August 2015. Another photograph of the same crashed UAV emerged on social media on 13 August together with claims that it came down in Pakistan's Balochistan province, raising the possibility that it crashed during an operational sortie to carry out surveillance inside Pakistan, possibly of Balochi militants or smugglers.

19 February 2016 IRGC, Iran unveiled an improved version of Shahed 129 on the anniversary event of the Islamic revolution in 1979. The new version has the redesigned nose section for the inclusion of Ku-band BLOS SATCOM datalink dish.

Original production
On 17 July 2019 the Iranian Shahed-129 was used in mobilised force of Shia militia fighters to operate in Syria.

The mutli-role Hamaseh UAV is designed by Iran Aircraft Manufacturing Industries (HESA) and was unveiled in 2013. The UAV is primarily intended to perform C4ISR missions and light-combat operations. 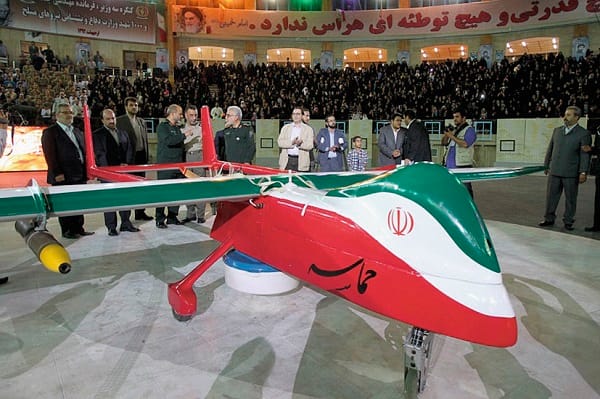 Iran unveiled its new Hamaseh UAV on 9 May. It purportedly has a longer endurance and can fly at a higher altitude than other Iranian UAVs (IRNA)

Development in brief
2013: Unveiled Hamaseh UAV on 9 May 2013.
2016: Hamaseh took part in IRGC, 'The Great Prophet' military manoeuvres in April.

Airframe
The Hamaseh UAV has fuselage bulged at the nose for housing the antenna of SATCOM, untapered high wings, twin-boom mounted tail, and fixed tri-cycle landing gear. It includes a radome-like housing at the belly of the fuselage for radar or antenna for signals intelligence-gathering systems and ribs to accommodate the missiles/rockets.

Mission payloads
Hamaseh is capable of carrying missiles and unguided 107 mm artillery rocket along with radar and electronic sensor for intelligence and reconnaissance.

Guidance and control
The Hamaseh is believed to be equipped with a SATCOM datalink for the BLOS.

Iran - undisclosed numbers have been acquired, believed to manufacture more than 30 units

Jane's is uniquely positioned to deliver both event analysis and in-depth data and insight on military equipment in production and use across the globe, non-state armed groups and military capabilities. Find out more about Jane's.