North Korea has recently initiated testing at one of its nuclear reactor sites in Yongbyon, according to a new report from Jane’s by IHS Markit.

The report, which first appeared in Jane’s Intelligence Review, analyses a range of commercially available satellite imagery from 2017 and 2018, and concludes that preliminary testing of North Korea’s experimental light water reactor (ELWR) at the Yongbyon Atomic Energy Research Center has likely begun.

The analysis used Digital Globe imagery from 25 February to identify an emission rising from the ELWR’s stack that implies testing of the machinery at the site. The stack is intended to vent non-condensable gases from the reactor’s primary circuit, and – given that this is the first observation of such activity – it is likely that North Korea is testing the flow path for non-condensables for future operations. 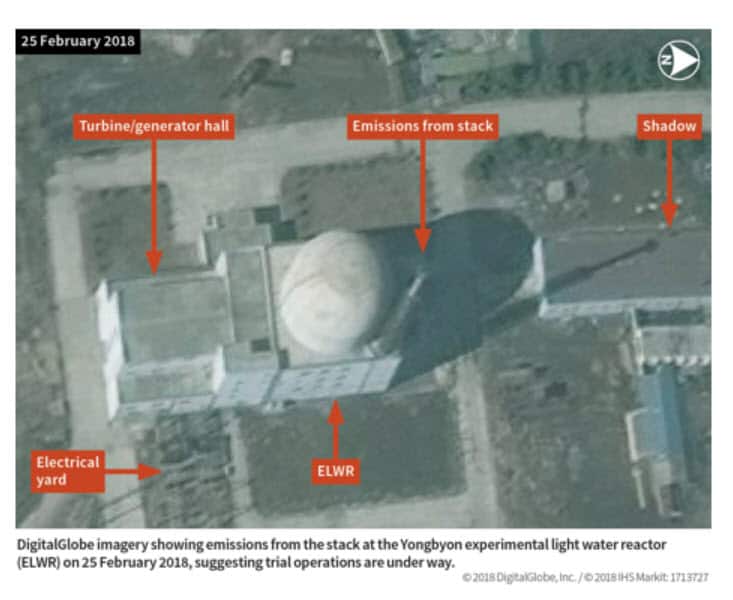 The ELWR was structurally completed in 2013 and is optimised for civilian electricity production, but has yet to become operational. It also has ‘dual-use’ potential and can be modified to produce material for nuclear weapons such as plutonium and tritium.

Jane’s conclusion that preliminary testing of the ELWR likely began in late February follows on from its observation of numerous indicators of increased activity at the ELWR that were visible throughout 2017.

This increased activity – the emplacement of a three-phase power line, a construction and dredging project to supply cooling water to the ELWR’s cooling intake cisterns, and significant movement of vehicles and personnel – was identified by analysts at Stanford University’s Center for International Security and Cooperation (CISAC) working on a report that was shared for publication in Jane’s Intelligence Review.

With the ELWR test programme now likely to be under way, the reactor itself could become operational with little warning later in 2018 or in 2019, the Jane’s report said.

Given the current lack of international inspections, it is currently not possible to assess with a high degree of confidence whether the ELWR will fulfil a civilian electricity generation function, or whether it will be diverted to produce weapons-grade fissile material. Further monitoring of the type and cadence of activity at the site is likely to reveal clues about North Korea’s ultimate intentions.

This is an extract from an article that appeared in Jane’s Intelligence Review. Learn more.