Following the sulfur regulation implemented in 2020, the International Maritime Organization (IMO) has introduced additional measures to reduce the carbon intensity of international shipping. Specific energy efficiency and carbon emission targets are set. The global Very Large Gas Carrier (VLGC) fleet is expected to reach 339 by the end of 2021, and to be profoundly impacted by the IMO regulations. The compliance situation varies from one ship to another, but several ramifications should be expected, ranging from drydock services in the near term, to potentially new marine fuels over the longer term.

Acronyms, technical jargon, and real issues for the LPG fleet

As part of the initial IMO Greenhouse Gas (GHG) Strategy, which aims to reduce the carbon intensity of international shipping by 40% by 2030, and by 70% by 2050 compared with a 2008 baseline level, IMO's Marine Environment Protection Committee (MEPC) has adopted amendments to the International Convention for the Prevention of Pollution from Ships (MARPOL) Annex VI. The latest regulations take on the technical and operational approaches.

Under the new measures, all ships of 400 gross tonnage (GT) and above will be required to have their Energy Efficiency Existing Ship Index (EEXI) calculated with certain requirement of improvement in energy efficiency varying by the size and type of ships. For gas carriers, ships of 10,000 deadweight tons (DWT) and above are required to have improved their technical energy efficiency by 30% versus a 2013 reference line and each ship is required to have achieved the required efficiency level to get their one-off International Energy Efficiency Certificate re-issued at their first ship survey on or after January 1, 2023. Failure to meet the required standard would lead to the vessels unable to be used for international trade.

Each ship will get the operational carbon intensity rating on a scale - A, B, C, D, E with A indicating a major superior, and the remaining grades indicating minor superior, moderate, minor inferior, or inferior performance level. A ship rated D for three consecutive years or E for a year is required to submit a corrective action plan to show how the required rating - C or above - would be achieved.

In simple terms, a ship running on a low carbon fuel clearly gets a higher rating than one running on high carbon fuel. The first rating will be given to each ship in 2024, based on the CII of the ships recorded in 2023, with a 5% improvement required versus the 2019 baseline figure. In practical terms, the race is already on. After 2023, ship owners must seek ways to improve CII of their ships constantly, as a 2% incremental improvement is required each year through 2026 to meet the 11% carbon intensity reduction target for international shipping for 2026, versus 2019. According to the IMO, this is aligned with the sector-wide carbon intensity reduction of 40% between 2008 and 2030, on its way to a 70% cut by 2050.

What does this mean to the VLGC fleet?

The question is how many VLGCs are currently compliant with the new regulation that is to come into force on 1January 2023. Unfortunately, this is not clear as each ship's EEXI will need to be individually calculated by ship owners. Overall, older ships will have harder time complying with the stringent new regulations.

Increased shipyard services
The reduction factor described above, 30% under the EEXI amendment, could be even higher for the vessels built before 2013. The number of VLGCs currently in operation that were built before the timeline is 134. The year 2020 ended with 312 VLGCs (including ethane-carrying ships) with capacity of 73,000 cubic meters and above. When the regulation comes into force in less than two years, many VLGCs will rush into shipyards to make improvements to their energy efficiency. Most common modifications will be installation of energy saving devices, or to install Engine Shaft Power Limitation (ShaPoli) and/or Engine Power Limitation (EPL) system, which is used to lower the maximum speed of the vessels.

A division in the VLGC fleet
Operating vessels at such low speed could hamper economics of the vessels, especially on a chartering basis, as the vessels will make a smaller number of voyages during the duration of chartering contacts than when the vessels could be operated at faster speed. This could lead to a flurry of sales of older VLGCs in near term, instead of expending capital to improve their vessels' energy efficiency.

Alternatively, this could also trigger vessels with lower speed to be placed in the East of Suez, mainly in the Middle East-India market, a route on which faster speed is less likely required than in West of Suez, which is mainly supplied by US LPG exports.

Another impact of the potential deterioration in vessel operating economics could include a steep decline in chartering rates of the less-ideal ships and could even drive them towards earlier-than-expected retirements, which could make the pool of VLGCs smaller.

Currently, the number of VLGCs (including ethane-carrying ships) with capacity of 73,000 cubic meters and above is expected to hit 339 by the end of this year and will be topping the 400 mark as 2023 closes out, if no scrapping of the vessels occurs by then.

Potential new low-carbon fuel to the rescue over longer term
There is a clear shift toward dual-fuel engines in the LPG shipping market to comply with IMO's strengthening environmental regulations, as the number of VLGCs using LPG as a fuel continues to increase (see Figure 1). 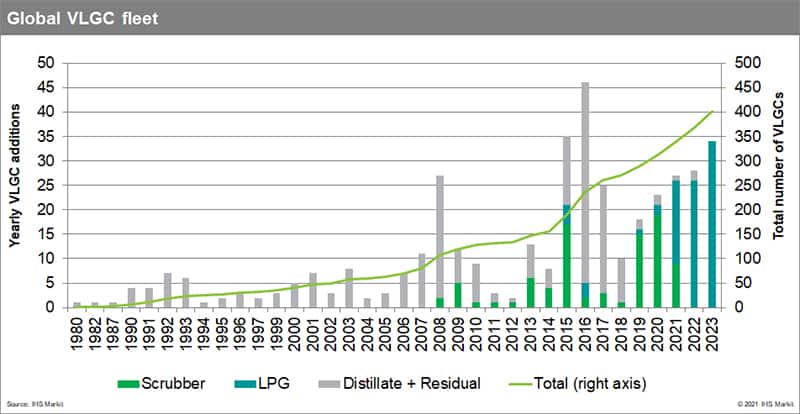 The questions remain: how far into the future will vessels with dual-fuel engines stay compliant? What happens after 2026? The shipping industry is expected to continue to face more stringent regulations from IMO. Potential candidates for long term policy changes include introduction of a hefty carbon tax to encourage greener alternatives such as hydrogen and ammonia.

Active research is being conducted for the use of ammonia - combination of nitrogen and hydrogen -- as marine fuel. Ammonia is liquefied at -33°C, so it can already be transported on LPG-carrying vessels, while hydrogen requires -253°C for liquefaction. However, product availability of ammonia remains a concern, as production is also needed for agricultural fertilizer.

Annual fuel consumption in sea transportation sector is estimated at about 300 million metric tons (MMt). To replace 1 metric ton of marine gasoil, 3.3 tons of liquid ammonia is required owing to its lower energy density, meaning that replacement of 25% of marine fuel demand at current level with ammonia requires 240 MMt of ammonia. Total 2019 global ammonia demand stood at 187 MMt, according to IHS Markit data.

The speed of advancement in technology will need to keep pace with tighter regulations by IMO going forward. With rapid tightening of regulations expected to continue over the coming decades, research efforts will need to remain robust. IHS Markit expects that the global shipping industry will continue to fund these efforts, which could accelerate a technological breakthrough in the shipping industry and lead to a global marine sector that looks very different from that of today.