FOMC Voting Index shifts to the hawkish side

In 2016 we introduced the FOMC Voting Index, which summarizes the relative tendencies of the voting members on the FOMC with respect to interest-rate policy. There are currently 9 voters on the Committee, shrinking to 8 in early February when Janet Yellen’s term as Chair ends.

How we rate the members

We assign to each voting member a number from 1 to 9, with 1 being the most dovish — the most likely to favor a lower or more slowly rising path for interest rates — and 9 being the most hawkish — the most likely to favor large or more rapid increases in interest rates. To construct the index, voting members receive different weights to reflect their relative importance, with the highest weight naturally assigned to the Fed Chair. The Chair of the Federal Reserve receives the highest weight of about one-third, with lower weights assigned to the President of the New York Fed, who traditionally serves as Vice Chair on the FOMC, and the Vice Chairman of the Federal Reserve. Smaller weights are assigned to the remaining members of the Board of Governors, who are permanent voting members on the FOMC. The last group are the four rotating voting members drawn from the 11 regional Federal Reserve Banks outside of New York, whose individual weights are smaller than those for governors. Weights sum to one.

Some members have established reputations as consistent hawks, doves, or centrists, while others may be more “situational” in their relative position on the spectrum of doves and hawks. Among current FOMC members (but presently not a voter), President George of Kansas City has been a consistent hawk, while President Kashkari (Minneapolis) has been a consistent dove in his relatively short tenure since 2016. In contrast, President Bullard, who has advocated no increases in interest rates for the past year-and-one-half, can be described as a “situational” dove. At some point in the future, when rates are higher but the consensus on the FOMC anticipates rate cuts, Bullard’s strategy would leave him a relative hawk. Neither Kashkari nor Bullard is a voting member in 2018.

With that background, what does our analysis suggest? Our analysis, along with a thorough review of their speeches and media appearances, informed our assessments regarding doves and hawks. 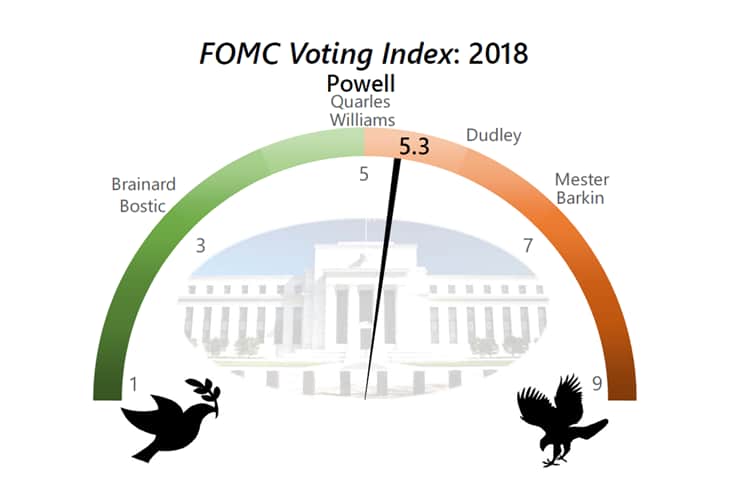 Starting on the left (dovish) side, President Bostic and Governor Brainard are generally doves. In the recent past, Governor Brainard has argued that there was still room to strengthen labor market involvement with little risk of overheating. President Bostic has advocated a slow removal of accommodation. In early January, he indicated he viewed less than 3 rate hikes in 2018 as appropriate. Neither is expected to oppose strenuously a gradually rising path for interest rates, so we assign them a rating of 3.

On the other side, President Mester has adopted a generally hawkish stance in recent years, repeatedly stressing concern that the FOMC should not fall behind the curve by allowing the economy to overheat. We expect that she anticipates 4 rate hikes in 2018. President Barkin, newly sworn in at the Richmond Fed, has no track record. However, we assume that he will adopt a generally hawkish approach that has been the hallmark of that institution. Mester and Barkin are each assigned a 7.

Other voting members on the FOMC are viewed as centrists, including Governors Powell and Quarles, and President Williams of San Francisco. President Dudley of New York is also a centrist, but the tone of his remarks suggests a little more concern about the risk of overheating, and less concern that the recent shortfall of inflation below the Fed’s 2% target is likely to persist far beyond early 2018. President Williams has been no more likely than other centrists to stress overheating risks, so we expect that he is more or less aligned with the centrist group for 2018. Hence, we place Dudley to the hawkish side of the center (6).

Finally, we have omitted Janet Yellen, as she has announced she will resign from the Board once her term as Fed Chair ends in early February.

Based on the above assessments, the FOMC Voting Index for 2018 is slightly to the hawkish side of center on the dove-to-hawk spectrum, with a reading of 5.3.

Looking ahead, there could be changes to the voting index as members are added to the FOMC, or if voting members change their stance. There are four openings on the Board of Governors — Marvin Goodfriend has been nominated for one of those positions — and President Dudley will step down from the New York Fed this summer. His replacement is not yet known. There is not enough information at this point to anticipate how changes in voting members will alter the dove-hawk balance on the Committee.

For more information on the FOMC Voting Index, including historical readings and methodology, please contact ecr@ihsmarkit.com.

Case study on recovery from South Korea -- today's @WSJ: "it is unlikely that any economy will experience a full, r… https://t.co/yDJX0tAwX7

Business closures clobbered hospitality and retail hiring in Western states and the Northeast and a faltering energ… https://t.co/StJMaB6fP6

Troy Walters from our US team in @WSJ @kimmackrael @katherinesayre "...Nevada’s employment level to be 21% lower in… https://t.co/Uksixottsf

Commodity prices rose for a fourth consecutive week last week but slower, chalking up a 0.7% weekly gain as measure… https://t.co/LozOp9SGBg