Since October 2017, Taiwan’s President Tsai Ing-wen was reported to be working on a plan to increase the military budget significantly, signalling the need for Taiwan to develop advanced weapon systems and acquire more military equipment from the US.

In a report released in December 2017, the Ministry of National Defence (MND) explicitly designated China as the island’s biggest security threat, making specific reference to the increase in frequency of Chinese military activities. China’s air force carried out 14 military aircraft exercises close to Taiwan’s ADIZ from July to December 2017, compared to only two from January to June. On January 2018, Chinese aircraft carrier, the Liaoning, briefly entered the Taiwan ADIZ while sailing towards the South China Sea.

On 4 January, Taiwan had sharply criticised a decision by the Civil Aviation Administration Authority of China (CAAC) allowing the use of the M503 civil flight route, ostensibly to ease airspace congestion over southeast China. M503 runs near Taiwan’s airspace, and more importantly, its military bases. Taiwan’s defence ministry warned that its military would “warn, intercept and repel” any aircraft that enters Taiwanese airspace. The Taiwanese aviation regulator retaliated by denying two Chinese airlines extra Lunar New Year traffic rights on 19 January. On 31 January, China’s Eastern Airlines and Xiamen Airlines cancelled around 200 flights to Taiwan after they were unable to receive permits.

China’s relationship with Taiwan has deteriorated since President Tsai Ing-wen’s electoral victory in 2016. Tsai’s incumbent Democratic Progressive Party (DPP) is more supportive of Taiwanese independence from the People’s Republic of China than its rival, the Kuomintang (KMT) or Nationalist Party of China. Unlike the KMT, the DPP does not recognise the “One China Principle”, which states that both Taiwan and mainland China are parts of a single “China” state. China likely views this as a destabilising factor and it will seek to discourage DPP from pursing pro-independence policies; official Chinese policy authorises the use of military force to prevent Taiwan from declaring independence.

Deteriorating relations between China and Taiwan are highlighted by the steep drop in official diplomatic interactions since Tsai Ing-wen’s election. Both sides view the other side’s military build-up as a threat to their strategic interests, especially for China, which views the ability to dominate this region, which it regards as party of its natural sphere of influence, including assuring the free movement of its air, naval and commercial assets, as a strategic imperative. China’s ongoing military exercises near Taiwan increase Taiwan’s perception of a Chinese military threat. Although these exercises have historically been a regular occurrence, most notably the 1996 Chinese firing of missiles into the Taiwan Strait, resulting in military deployments by both Taiwan and the US, recent Chinese exercises have been significantly more provocative and more frequent. China has also begin mounting long-distance military exercises off Japan and the Korean Peninsula, extending past the ‘first island chain’ into the western Pacific. In 2015, in a defense white paper, the People’s Liberation Army (PLA) emphasised the importance of establishing an expeditionary role to secure China’s sea lines of communication (SLOCs) and broader overseas interests.

Confrontational political rhetoric between Beijing and Taipei has also intensified, with Chinese President Xi Jinping threatening during the 19th Party Congress in October 2017 that China “has the resolve, confidence and ability to thwart any attempt by Taiwan to declare independence”. China also described its military exercises as justified patrols of its sovereign territory. For Tsai, there is significant pressure from her younger electoral base to take stronger stance against Chinese influence, but there is very little support to declare outright independence from China.

Closer US-Taiwan bilateral relations, increased military build-up by US allies in the South China Sea, in response to China’s increased assertiveness in the nearby seas, have very likely increased China’s threat perception and its perceived need to demonstrate its resolve and capability to defend its interests in the region. China has long regarded Taiwan sovereignty as a non-negotiable issue.

More broadly, US military co-operation with regional allies in the East China Sea is also a major concern for Chinese military planners. This includes South Korea’s deployment of the THAAD missile defence system, manned by the US military (see China: 8 March 2017: China likely to increase retaliatory economic measures against South Korea with THAAD missile defence system deployment). Concurrently, Japan’s interest in revising its pacifist constitution to establish a constitutional authority for conventional defence forces, and ongoing territorial disputes around the Senkaku/Diaoyu islands have further fueled China’s perception that its vital interests are being challenged. This perception is likely prompting recurring incidents involving Chinese naval assets patrolling Japanese-claimed territories, the most recent being a Chinese submarine spotted near the Senkaku islands in January 2018.

Chinese patrols and other provocative activity near the Taiwanese ADIZ are probable, although a Chinese military blockade, which would be considered an act of war, remains unlikely. The frequency of Chinese military exercises close to Taiwan’s ADIZ and other US allies around the East China Sea, particularly near Japan's Miyako Strait and the Bashi Channel, is likely to increase over the coming year. Chinese aircraft entering the ADIZ would lead to increased war risk but would be unlikely to escalate into sustained military conflict. Chinese commercial aircraft using route M503 would be more likely to enter Taiwanese ADIZ than PLAAF; such incidents, Taiwan fear, would provide China with the opportunity to carry out covert reconnaissance activities and test the US-Taiwanese response. There is low risk however, of the Taiwanese Air Force shooting down Chinese commercial aircraft violating the ADIZ. Significant escalations, such as the repeat of the 1996 incident of China testing ballistic missiles near Taiwanese ports in Keelung and Kaohsiung, remain unlikely. Furthermore, there is a low risk of Chinese harassment of Taiwanese and third-party marine cargo, which would be an indicator of escalating war risk.

Regulatory burden risks in China affecting Taiwanese companies are also increasing, predominantly impacting on those industries with close trade ties with China, including food, manufacturing, media and technology sectors. In January 2018, China suspended purchase of a Taiwanese television series, on allegations of it having received “pro-independence sponsorship” by the Taiwan Ministry of Culture, and also destroyed food imports from Taiwan that are not labelled “Taiwan area in China”. Taiwan-based production plants will also face higher regulatory burden risks on the Chinese side of the border, with increased likelihood of arbitrary fines, bureaucratic barriers, security checks, and potential bans if the firms are judged to be too close to the DPP government. Broadening of political and military co-operation between Taiwan and the US, including the US Senate and President Donald Trump approving the Taiwan Travel Act, would probably trigger Chinese regulatory measures against US firms, including increased security scrutiny, difficulty in obtaining commercial permits, and additional commercial bans selectively targeting US and Taiwanese firms. US firms with a strong presence in Taiwan will be at particularly high risk. 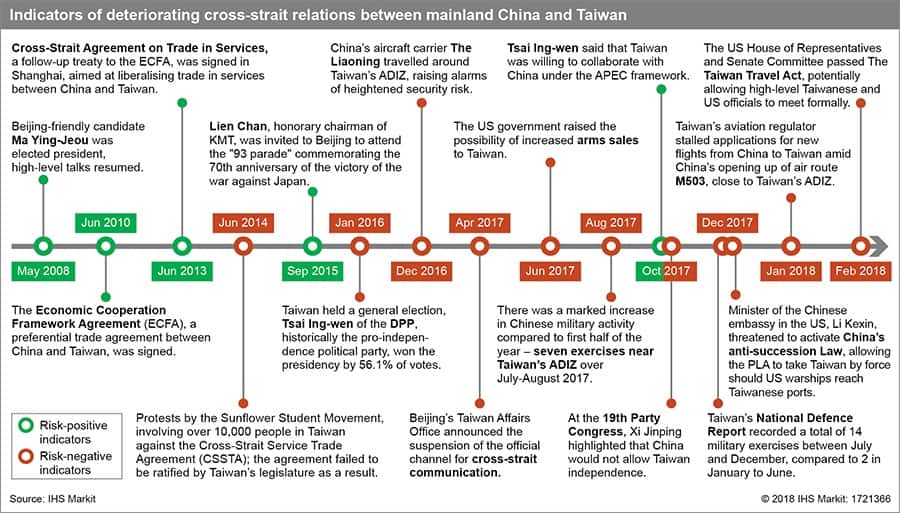 The slow rollout of the COVID-19 vaccine program in the sub-Saharan African (SSA) region will continue to pose a ri… https://t.co/tGfbn1AEWk

Are we finally seeing some weak signals that #commodityprices may be stabilizing? Our experts share what they are s… https://t.co/eS8LdYN9d2