Mainland China and India, emerging Asia's largest economies, have introduced multiple policies to help borrowers and banks during the COVID-19 pandemic. However, these measures have exacerbated underlying risks in the banking sectors notably credit and asset-quality risks.

Since COVID-19, a number of policies have been introduced in mainland China. These include a loan-payment moratorium for MSMEs until March 2021, non-performing loan (NPL) classification relaxation for MSME loans, more rediscounted loans to banks (with 80% of the loans earmarked for MSMEs), increased relending and rediscount quotas for smaller banks, and a lower reserve requirement ratio for these banks.

An extension of the policies introduced before COVID-19 will increase liquidity for smaller banks and boost lending to MSMEs, while at the same time they are likely to introduce more risk. MSME loans had already risen by 50% in the first six months of 2020 versus the end of 2019. Given the weakness of demand because of the COVID-19 pandemic, more MSME repayment difficulties are likely to come when the moratorium expires in March 2021 (between end-February and end-March 2020, nearly 130,000 companies have de-registered). As of the first quarter of 2020, city commercial banks and rural commercial banks accounted for 50.9% of total micro and small loans outstanding but only 30% of total sector assets as of mid-2020. Given historical concentration in lending to MSMEs, the risks will fall disproportionately on smaller banks, compared with large banks' natural clients of large corporates. Smaller banks also face tighter liquidity positions with greater reliance on interbank depository notes and lower capital buffers to deal with a surge in defaults. 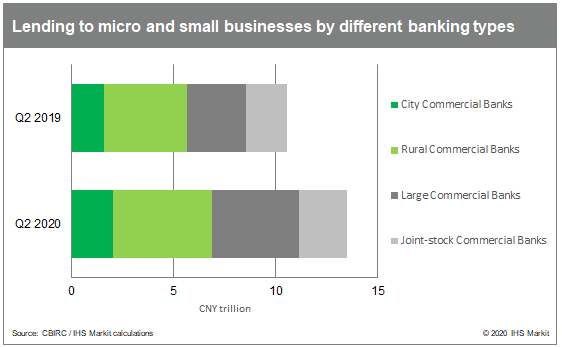 The mainland Chinese authorities have acknowledged that NPLs will rise in the next 12 months, and to support these smaller banks' likely worsening asset quality and subsequent falling capital base, the central government allowed local governments to use part of the proceeds raised from the sale of local government bonds to purchase convertible bonds from small and medium-sized banks in July 2020. The recent stake purchase of Huishang Bank, a small bank, by People's Bank of China's Deposit Insurance Company suggests the state is willing to provide support for smaller banks. If the convertible bond options are trigged by the local governments, they are likely to become part owners of these banks. On the one hand, this suggests more security for these banks; on the other hand, this likely means lending will be ensured for particular areas and sectors.

For India, IHS Markit had been concerned about the country's high levels of NPLs, which as of March 2020, stood on average at 8.5%. State owned banks are weak capital buffers at 13.1% which is lower than the sector average of 14.8%. Adding to concerns is the historical reliance on government capital injection. A key measure to address the last issue was the consolidation of state-owned banks which was completed in March 2020. Given their bigger size, it is expected that they will more easily tap financial markets for funding rather than the government.

Since the COVID-19 outbreak, the Reserve Bank of India (RBI) has introduced multiple banking policies. These include loan moratoriums, delayed implementation of the last tranche of the Basel III capital conversation buffer and implementation of the net stable funding ratio, and the potential introduction of a "bad bank". These are all expected to reduce immediate capital pressure on Indian banks and temporarily alleviate the historic concerns for India's banking sector risks.

The RBI's Financial Stability Report (July 2020) shows that, in the worst-case scenario (GDP falling by 8.9%), the banking sector is likely to see its NPL ratio rising from 8.5% in March 2020 to almost 15% by March 2021. For state-owned banks, the NPL ratio is expected to rise from 11.3% to more than 16%. Because of the COVID-19 pandemic, the RBI expects that five banks will have a capital adequacy ratio of below 9% in the most severe case, providing further support for state capital injections. The government has noted that it is willing to provide capital injections wherever needed. This is a big change from the budget last fiscal year when the government budgeted virtually no capital injections for 2020/21 with the expectation that the large capital injection by the Bharatiya Janata Party (BJP) government to the merged banks in 2019 would already be sufficient. 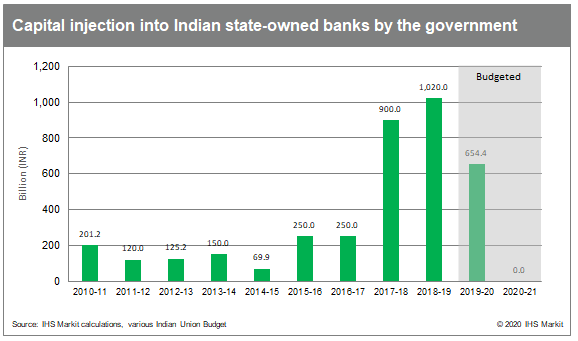 The COVID-19 force majeure event makes it easier for the government to implement its plans and garner support from the public. This, in turn, will encourage expanded direct lending to state-preferred/priority areas and areas popular with voters. It should be noted that state-owned banks often disburse over the 40% required level of priority area lending. as well as higher lending to the public sector where state-owned banks lend multiple times of the proportion of their total loans to public sector when compared to private-sector banks. This could lead to a vicious cycle in which more loans are given to high-risk areas because of continued state-owned and state capital injections. The subsequent increase in state ownership will encourage even more lending to high-risk areas thus intensifying state-owned banks' role as a policy vehicle.

Over the next 12-24 months, the policies enacted will impact on the reporting of credit risk and will lead to an eventual surge in impairment. To compensate for such deterioration, capital-raising will be needed, which in some cases has already started. For smaller banks in mainland China the authorities are likely to provide continued support. In India the national government is likely to take a larger role in owning banks. Overall, under the current trajectory, this may prevent India from privatizing more state-owned banks, reversing our previous expectation that after completing mergers and capital injections the government would start looking at privatization options for major state-owned banks.