Global securities lending revenues increased by 12% YoY in December, with $909m in monthly revenue the most for any month since June, when revenues totaled $971m. That marks the fourth consecutive month of increasing returns, albeit starting from 2020's least remunerative month in August. US equity revenues continued to trend higher throughout December, as the IPO market turned white-hot. Equity ETFs also saw an increase in borrow demand, with loan balances reaching an all-time high on December 21st. In this note we will review revenue drivers from December within the context QTD and YTD results. 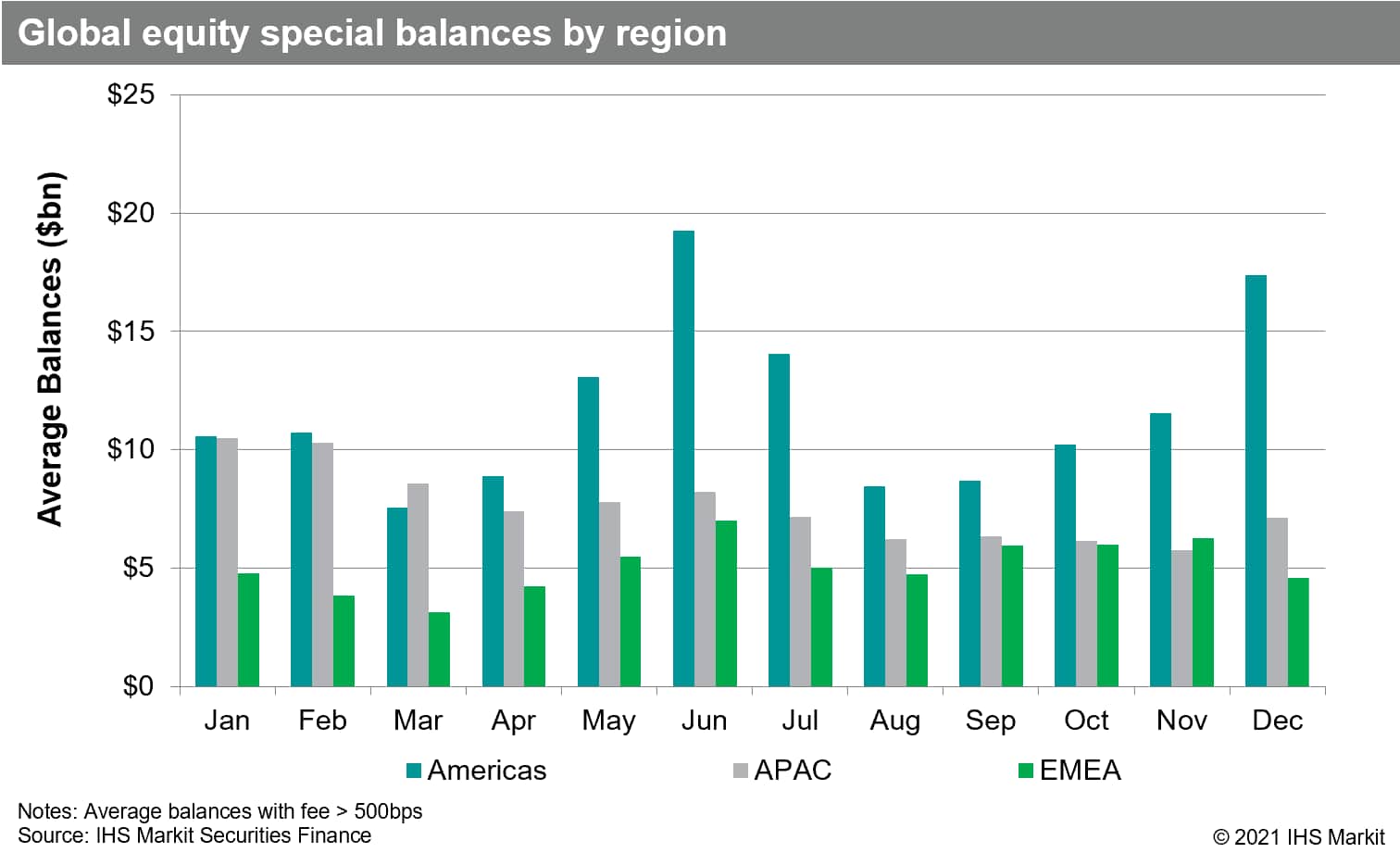 Americas equity revenues came in at $434m for December, a 32% YoY increase, and the largest monthly return since July ($436m). The upswing was largely the result of increased special balances, with average fees increasing 26% MoM, however loan balances also increased by 10% MoM. Americas Q4 equity revenues of $1.0bn reflect an increase of 4.8% YoY.

US equity revenues came in at $408m, a 49% YoY increase, and a similar MoM increase. The most revenue generating US equity in December 2020 was Quantumscape Corp (QS) with just over $60m, an impressive feat considering Quantumscape only went public via a SPAC combination on December 4th. The surging demand for QS shares was emblematic of borrow demand for recent SPAC and conventional IPOs, which reached new heights in December. US equity "special" balances, defined here as loans with a fee greater than 500bps, increased 51% MoM from an average of $11.1bn in November to $16.7bn in December (nearly reaching the $18bn peak for 2020, observed in June).

Utilizing the IHS Markit Situational Analytics dataset we aggregated current and former SPAC IPOs which went public since the start of 2018 to review the impact on overall US equity finance revenue. In December current and former SPACs delivered $105m in equity finance revenue, 26% of all US equity revenue. The December SPAC revenue is just over 3x the November tally, however it's still only the 2nd most revenue generating month of 2020. In July Nikola Motors generated $106m in revenue, 95% of the recent SPAC IPO total; In December the most revenue generating recent SPAC was Quantumscape, which generated 61% of the SPAC total. 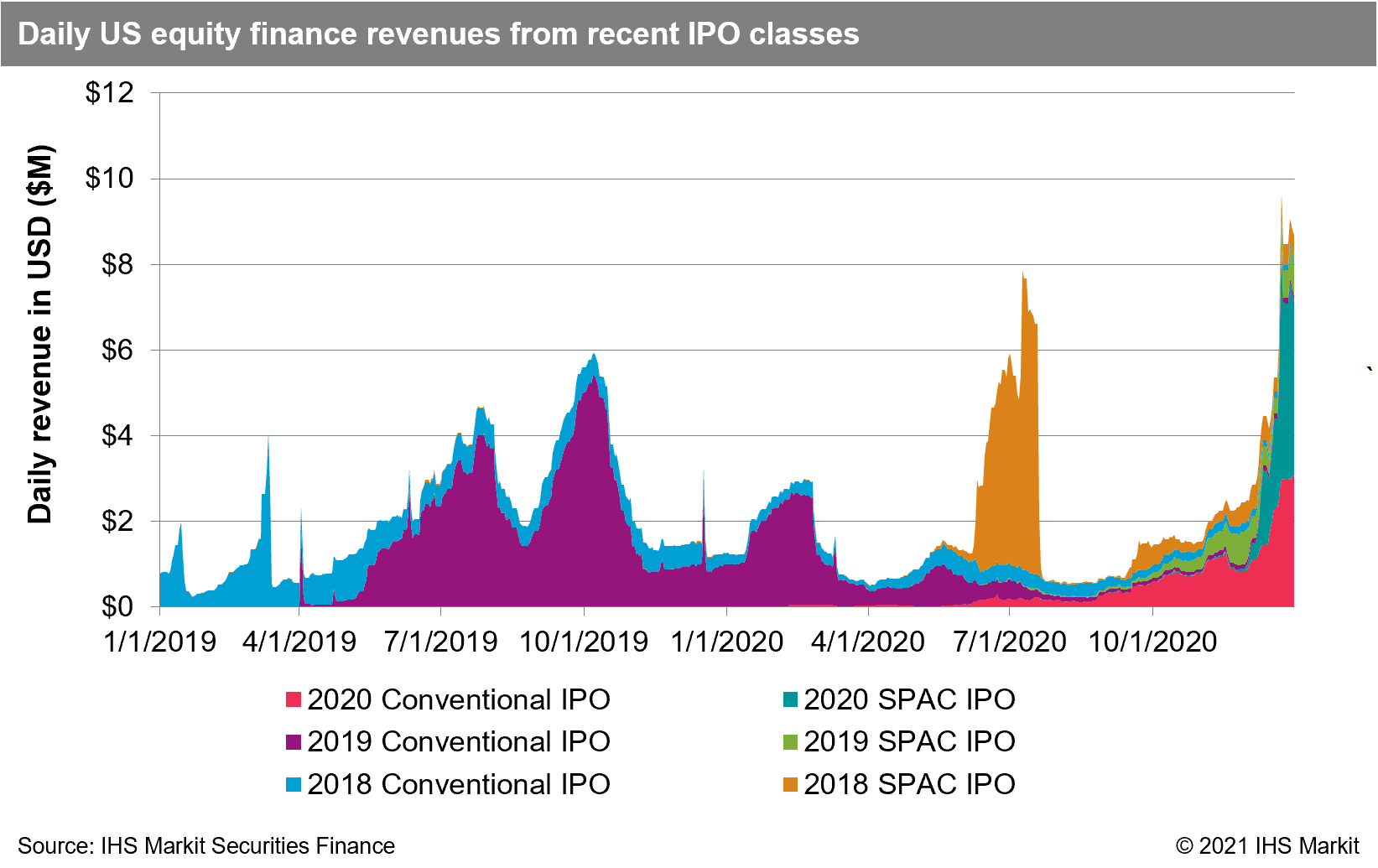 Borrow demand relating to non-SPAC IPOs was also strong in December, with the 2020 vintage of US IPOs generating $62m in equity finance revenue, more than doubling the November return.

Canadian equity lending returns held steady MoM but remain well below the YoY comparable, which has been the case since March. December revenues of $25m reflect a 53% YoY decline. Cannabis related returns have declined steadily as increased issuance has translated to additional lendable shares and lower fees. Canadian equity average specials balances increased by 9% MoM but remain less than half the average observed over H1 2020.

Asia equity finance revenues notched a small win with December being the most revenue generating month of Q4, however the YoY shortfall persisted with December completing a year where each month delivered less revenue than the 2019 comparable. The largest market, Japan equities, delivered $49m in December revenues, a decline of 17% YoY and a 15% increase compared to November. Hong Kong equity finance revenues continued to trend higher in December with $32m in revenue reflecting a 27% YoY increase and the most monthly revenue for 2020. The short sale ban in South Korea continues to limit lending revenue, with $9m in November revenue reflecting a 79% YoY decline. The South Korea ban is set to remain in place until March; Malaysia allowed their short sale ban to expire at the end of December. Asia equity special balances continue the fledgling recovery from the 2020 low point in early November, with December's $7bn in daily average special balances being the most for any month since July.

Global ETP revenues totaled $38m for December, a 71% YoY increase, however the MoM increase was only 6% compared with November. The $38m in December return was the most for any month since March, narrowly exceeding June and November. ETP loan balances reached an all-time high on December 21st, $90bn. The increase in balances was partly driven by the SPDR S&P 500 ETF Trust (SPY) around the Tesla inclusion to the S&P 500; SPY on-loan balances reached $16bn on Dec 21st. On-loan balances averaged $76bn, a 55% YoY increase and the highest average balance for any month of 2020.

The recent upswing in ETP revenue has been primarily driven by equities, which generated 84% of December revenue, up from 82% in November. December raised the YTD equity contribution to 77%, with high-yield and loans products having generated substantial returns in Q1. The top revenue generating ETPs in December were primarily focused on US and Chinese equities. 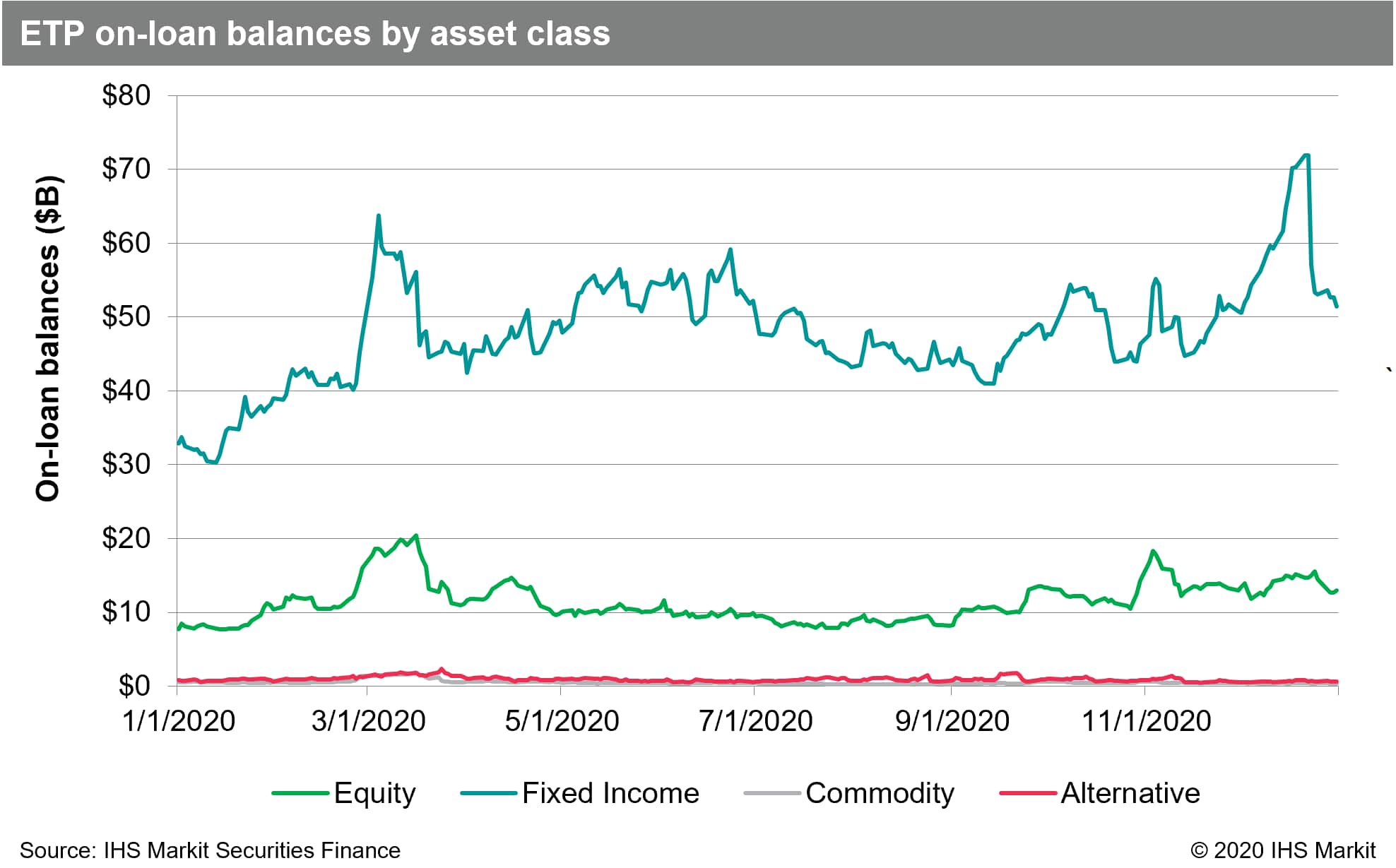 Corporate bond lending returns came in at $33.5m for December, a 21% decline YoY, and a 4% MoM increase. Corporate bond lending revenues have been on a steady decline since the post-GFC peak in 2018. Central bank support for global credit has dampened borrow demand while lendable value has increased steadily since April, however December did see a 2% increase in average on-loan balances, $186bn, bringing balances at positive spreads to the highest level since February's $198bn.

For the full-year 2020 global securities finance revenues totaled $9.3bn, a 7.4% YoY decline. The year ended on a high note, with December generating the 2nd most revenue for any month of 2020. Looking ahead, the IPO market in the US is likely to generate a lineup of borrow demand events ahead lockup expiries throughout 2021, which will only be bolstered by the surge in SPAC deals. In Europe the expected reinstatement of dividends in 2021 will likely boost lending returns and arbitrage trades driven by capital raising, such as rights issues and convertible bonds, may continue to drive EMEA specials balances as well. In APAC the conclusion of short sale bans may be a tailwind for 2021, while some markets such as Hong Kong are currently seeing increased borrow demand. At the end of tumultuous year there is cause for optimism heading into 2021!