5G: The best is yet to come

The next-generation mobile standard known as 5G is finally becoming more widely available after initial deployment in late 2018, and more 5G mobile launches are set to take place this year in various parts of the world.

But while eagerly anticipated by consumers craving an enhanced mobile experience, 5G had the lowest readiness score among the six transformative technologies tracked by Digital Orbit, as shown by the graphic below. Such a finding may seem surprising given the flurry of industry activity around 5G and the of media attention lavished on the technology.

Yet, a closer examination reveals the reasons accounting for 5G's low score on readiness, a key metric in Digital Orbit that rates the transformative technologies deemed most ready for adoption by the six industries covered in the research. 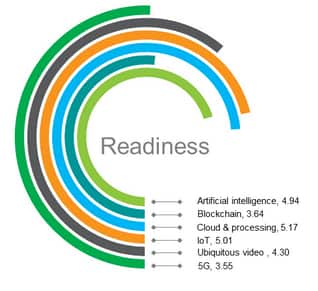 The benefits of 5G

5G is significant because it brings three compelling benefits: faster data speeds, lower latency, and increased connectivity. And what couldn't be done with older technology will now be possible as 5G enables altogether new use cases; examples include driverless cars, immersive entertainment and virtual reality with zero delay, uninterrupted video, and gaming with practically no latency. On the industrial front, 5G will be key to expanding and realizing the full promise of the Internet of Things (IoT), with the technology's impact to be felt in smart homes, smart cities, and smart industries.

Even so, the full range of planned 5G capabilities will not be available during initial launches. In fact, many key features most frequently associated with 5G—such as ultra-reliable low-latency communications (URLLC)—won't be ready within the next 18 months. Instead, the wider range of 5G capabilities will unfold in a phased approach over the next few years.

In the readiness measure, 5G's scores were low in two specific criteria: overall technical development and ease of implementation, as the graphic below shows. This is understandable: More work is still needed to fully develop the 5G standard, and implementation will be complex and add to costs. Among verticals, 5G scored lowest in healthcare as well as manufacturing—two industries where 5G capabilities, especially in URLLC, are yet to take hold. 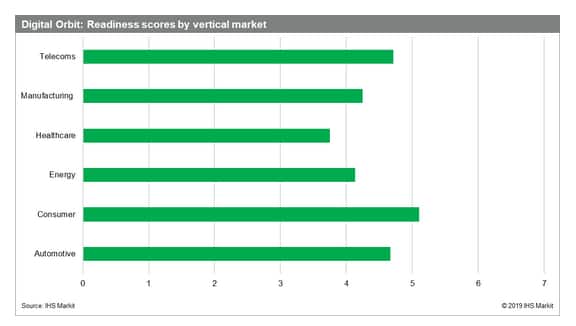 The low readiness scores of 5G, however, should not be viewed as a negative. The initial release of any technology is rarely revolutionary, and 5G's current functionality will soon give way to truly transformative experiences, especially in applications that utilize frequencies above 6GHz, the critical tipping point for the band of spectrum known as millimeter wave, or mmWave.

And because Digital Orbit scores are fluid, current technologies like 5G at the lower end of the readiness scale are also the ones most likely to see the greatest upsurge in the immediate future. With 5G, its readiness level could see the most sizable leap in the next 12 months, bolstered by further industry support, an expected increase in the deployment of 5G networks, and a growing number of 5G-enabled devices and hardware.

Digital Orbit's scores for 5G are better in the second key measure of impact, or how a technology changes an industry. Nearly 80% of key influencers stated they expect 5G to exert a high-to-significant impact on their industries within the next three years.

While there is a divergence in viewpoints between users and the analyst community in their assessment of 5G's impact, the variance can be attributed in part to the considerable amount of hype that 5G has generated, which has ostensibly led to premature expectations on what the new technology can do for business and trade.

But as the first real-world implementations of 5G unfold next year, Digital Orbit's 5G results will settle into a more appropriate range—one indicative of the technology's truer standing.