5G: “One network” capability is remarkable, but many challenges are still present

The fifth-generation mobile standard known as 5G will not only bring significant benefits like much faster data speeds and increased connectivity, it will also be the first all-inclusive cellular network able to accommodate three distinct types of use cases, ranging from very basic to the cutting edge. Many of these use cases operated historically on different networks, creating challenges in achieving economies of scale, according to a recent IHS Markit webinar on 5G.

The comprehensive, wide-ranging nature of 5G is also why its implementation presents specific hurdles on network infrastructure and end-device design not encountered with the predecessor 4G LTE technology.

The "one network" feature is of critical importance in 5G, which IHS Markit defines as coinciding with the commercial rollout of networks and devices compliant with Release 15 of NR Phase 1 specifications from the 3GPP, the standards body that develops protocols for mobile telephony.

Some key characteristics of 5G Release 15 include a non-standalone mode of operation utilizing LTE core and LTE as an anchor carrier; specific component carrier bandwidths as they relate to the 6-gigahertz (GHz) dividing line of spectrum for optimal 5G use; and support for mobile features like carrier aggregation and beamforming.

The ability of 5G to support three divergent types of use cases within a single network architecture is remarkable because the use cases at times involve contradictory technical requirements. The use cases range from immersive mobile broadband VR experiences with zero delay; to low-bandwidth applications of dense Internet of Things (IoT) nodes; to leading-edge, mission-critical use cases like remote vehicle operation or industrial manufacturing.

The three types of use cases in 5G are enhanced mobile broadband (eMBB) and fixed wireless access (FWA), Massive IoT, and mission-critical applications.

In the first use case, 5G can improve the data experience of those on the move with eMBB while also enabling capacity peak data rates for the home through FWA. Mostly consumer driven involving smartphones and laptops, both eMBB and FWA can be used for smart home applications, mobile viewing of ultra-high-definition (UHD) content, augmented and virtual reality, and cloud-based experiences.

The second use case for 5G involves the phenomenon of Massive IoT, characterized by deep and dense coverage of up to 1 million connections within a square kilometer; support of connected devices with long battery life of 10 years or more; and transmission of low rates of data that are not delay sensitive via machine-type communications (MTC). Massive IoT applications include sensors that support smart buildings, smart agriculture, smart cities, and transport and logistics.

In the third use case, 5G will be indispensable to mission-critical applications involving ultra-reliable low-latency communications (URLLC), where no delays can be tolerated and where high security standards are required. A network failure in mission-critical apps could lead to catastrophic consequences. Use cases include autonomous cars, digital health and remote medical surgery, robots and drones, and industrial automation.

Overall, the three types of use cases involve varying requirements, depending on their function and technical specifications, adding to the difficulty and complexity of deploying 5G. Home and mobile broadband, for instance, call for higher performance, while low-power consumption and cost are the foremost issues in IoT applications. For mission-critical apps, meanwhile, low latency and safeguarding security are the most important considerations.

For this year, any 5G network rollouts will largely focus on the eMBB element of 5G, which in many ways is an extension of the capabilities that already exist in 4G LTE and LTE Advanced. Meanwhile, the wider range of 5G capabilities, including URLLC and Massive IoT, won't be available just yet but will unfold instead in a phased approach that could take a few years.

The projected installed base of 5G in its first five years of launch will be much larger than that of 4G over the same time. By 2023 or Year 5, subscribers to 5G will reach 1.3 billion, up substantially from a low starting base in 2019, the first year of 5G rollouts.

The two largest markets will be North America and Asia Pacific. However, beginning on the fourth year in 2022, Asia Pacific will surpass North America in 5G rollouts, as shown in the graphic below, thanks to massive deployment of 5G technology in China and India. The so-called "golden year" will be 2023, when 5G will be present in most handsets. 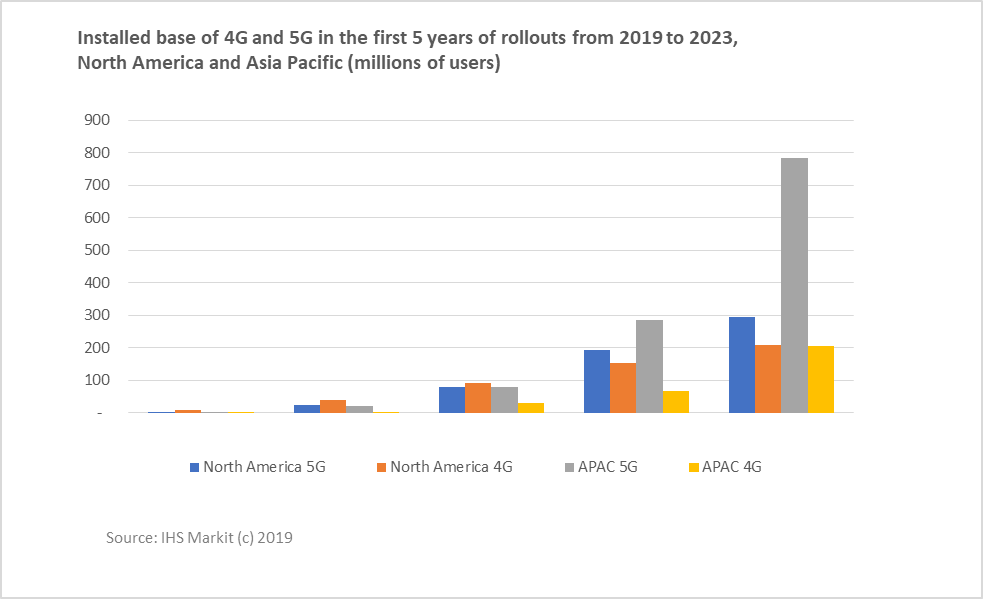 Average revenue per user (ARPU) will also be markedly higher in 5G, forecast to reach $50-70 a month in the US and Australia. In comparison, blended ARPU for voice and data was relatively flat in the first few years of 4G LTE use.

The early years of 5G will see eMBB leading in deployment. However, operators are likely to come up with customized 5G pricing plans, depending on the requirements of each use case. Examples of use cases that lend to customization include the real-time streaming of games and the viewing of high-definition or ultra-high-definition content.

The deployment of eMBB in the initial stages of 5G entails using the same core that runs 4G LTE. At the same time, the end-to-end architecture of 5G is being designed—a tough undertaking because critical-type communications are involved, and every access point added to the 5G network must be secure.

The 5G "one network" capability also presents challenges of its own. The vision of one network handling and managing several networks is appealing in its elegant simplicity, but the steps needed to achieve such a vision are complex and manifold, requiring extensive time and resources to develop and implement.

The inherent service-based concept is the fundamental difference between the new 3GPP 5G system architecture and that of previous generations. This means that 5G architecture is designed entirely to address all services related to its three principal use cases with utmost software-based agility. The approach is a departure from that seen in traditional network architecture, which is built with specific network elements or nodes that are mostly proprietary.

Devices capable of utilizing 5G will be ready for use almost as soon as the technology becomes available, signaling the advanced state of readiness of the market. Unlike 4G, which had only three smartphones during the first year of launch, 5G can boast of at least 20 smartphone designs available for release to the market this year.

In North America, the first 5G device is Motorola's 5G Moto Mod, which connects to the Motorola Z3. The Z3 smartphone is an unassuming 4G handset, but it was selected as the first 5G offering by Motorola because it can be customized with "mods." By connecting to the 5G Mod, the Moto Z3/5G is, in effect, a conventional 4G LTE device able to access 5G's so-called millimeter wave (mmWave) capability—the band of spectrum where implementations of 5G will produce the most dramatic results.

The Motorola device notwithstanding, the first true integrated 5G solution is Samsung's Galaxy S10, available in Europe and Asia. In Europe, meanwhile, UK operator EE launched at the end of May its 5G network and the OnePlus 7Pro 5G.

With speeds theoretically as high as 5 gigabits or more per second, mmWave technology delivers extremely fast data rates, compared to just 100-200 megabits per second for existing 4G LTE services. On the downside, mmWave coverage and range are constrained to distances of approximately one city block, and the tiny wavelength of mmWave makes the wireless signals hard to pick up but easy to block with obstacles. These characteristics make it challenging to build a radio frequency (RF) front to discern clear signals out of the low-propagation mmWave.

The 5G Mod and other mmWave smartphones, including the Samsung Galaxy S10 5G for Verizon, address this issue by integrating three or four separate millimeter-antenna modules that are strategically placed throughout the device to create spatial diversity, improve reception, and mitigate interference. This compares to just one antenna in most smartphone designs.

But such a solution drives up costs considerably, as each module includes its own RF path, complete with a phase antenna array, power amplifiers, power-management chip, and RF transceiver. At $18.80 apiece for each module, the four modules in the 5G Mod add up to a total of $75.20—three times the cost of the RF subsystem in 4G smartphones.

The modem and RF front end are competitive spaces in 5G device readiness, with various players pitching their own 5G offerings on the market. The players include Qualcomm, which was first-to-market with its Snapdragon x50 modem; Samsung and its Exynos 5100, used in Samsung's own Galaxy line of smartphones; Intel and the XM M8160, which can be found in computers as well as in Tesla's Model 3 car; MediaTek's M70, a system-on-chip solution from the Taiwanese maker that won't be available until next year; Qualcomm and the x55, its second-generation modem; and UNISoC with its IVY510, a low-cost solution from the Taiwanese maker formerly known as Spreadtrum, whose modem is aimed primarily at the Chinese market.

A seventh player is China's HiSilicon and its Belong 5000. HiSilicon is fully owned by Huawei, and its modem is a captive solution for use in the Huawei Mate 20X, like how the Samsung Exynos 5100 is used solely for Samsung's Galaxy smartphones. Given the geopolitical issues affecting Huawei, however, the Huawei phones with 5G modems may not be available for use outside China for some time.