Warren Buffet's various preferred stock loans made to various blue chip firms during the depths of the financial crisis turned out to be some of his most infamous investments, as these crisis era investments provided the investor with years of steady dividend income often capped out with a redemption premium. This high profile endorsement for the asset class has seen a slew of budding Buffets plough steadily larger piles of cash into preferred stock ETFs. The AUM managed by the seven US listed domestically focused preferred stock funds has swelled by over 12 times since 2008 to hit $27.2bn. 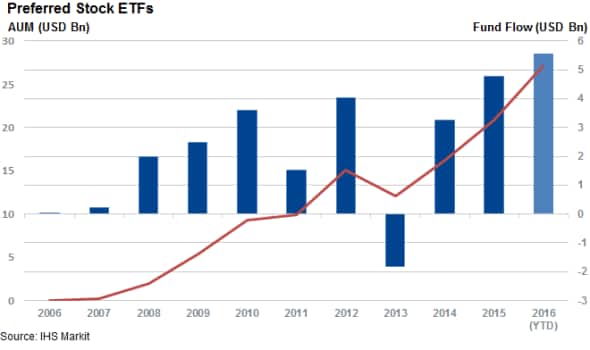 The surging AUM mostly occurred since the start of 2015 as the asset class registered $10bn plus of inflows. Preference stock ETFs were in fact the most popular fixed income asset class of last year in terms of relative inflows, as the $4.8bn that flowed into the asset class over 2015 represented 30% of the AUM seen at the start of the year, more than any of the seven bond ETF asset classes tracked by Markit ETF Analytics.

This year's record $5.6bn of inflows puts preference stock on track to repeat that feat as they represent 27% of the $20.9bn managed at the start of the year.

The iShares U. S. Preferred Stock ETF (PFF), the largest ETF of the asset class, has been the driving force behind the asset class's post crisis surge. Its AUM has swollen from $1.2bn at the end of 2008 to $17.7bn as of latest count.

Convertible bonds, the other hybrid bond category, have failed to spark the same enthusiasm among investors as the asset class has only managed a meagre $80m of inflows this year to date meaning the AUM managed by the has continued to linger below the $3bn mark for the last three years.

While the largest ETFs in both asset classes, the previously mentioned PFF and the SPDR Barclays Convertible Bond ETF, have delivered a similar dividend yield and total returns over the last 12 months, preference shares have proved to be much less volatile. The standard deviation of daily total returns of the PFF has been 40% lower than its convertible bond peer as convertible securities tend to behave more like equities.

Issuers which rely on convertible bonds to fund themselves also tend to more speculative firms so it comes as no surprise that the asset class has been more volatile than preference shares, which are mostly issued by large financial firms.

The differing levels of investor enthusiasm towards the two asset classes shows that investors in the current market would rather pass on capital upside in order to receive the type of guaranteed income that made preference stock such a popular investment with Warren Buffet.