Thailand's manufacturing economy concluded an otherwise disappointing 2016 on a positive note, reporting a return to growth of output, new orders and employment during December. The improvement in business conditions enabled Thai manufacturers to raise selling prices, with costs increasing at an accelerated pace. 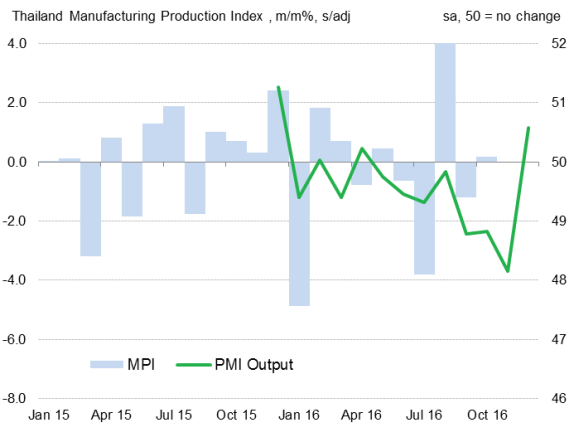 The Nikkei Thailand Manufacturing PMI, compiled by Markit, came in at 50.6 in December, signalling the first improvement in overall business conditions since April. The latest PMI reading contrasted with the picture seen throughout the seven months to November.

The December survey data showed growth in output being led by the fastest increase in new orders since last January, although respective rates of expansion were marginal. Encouragingly, employment across the Thai manufacturing sector expanded for the first time in the series history, though the pace of growth was slight. 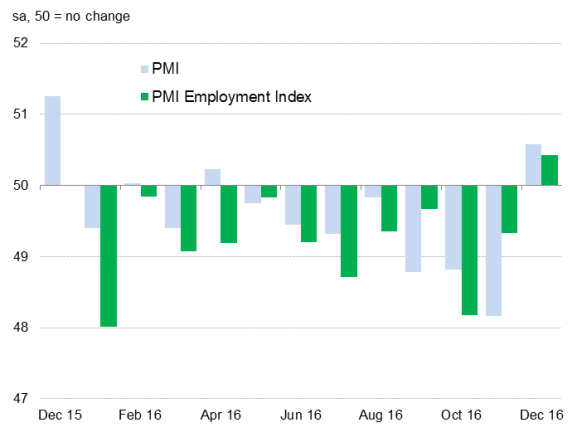 Although the survey showed manufacturing output rising during December, this followed the survey's steepest decline in production volumes in the previous month, when there were some reports of production halts and non-acceptances of new orders due to the recent passing of the Thai King. Therefore, it was likely that Thai manufacturers were playing catch-up after the initial 30-day mourning period passed. Furthermore, growth in exports remained elusive.

Despite the upturn in the final month of 2016, the average PMI reading of 49.2 for the fourth quarter as a whole, compared to 49.3 in the third quarter, suggested that manufacturing has continued to act as a drag on economic growth at the end of the year.

The improvement in the health of the manufacturing sector was accompanied by the largest monthly increase in input costs since March. Rises in fuel prices and some raw materials had fed through to input cost inflation. Selling price inflation resumed in December, easing the squeeze on profit margins for goods producers in Thailand. The December upturn was welcome news in an otherwise challenging year for Thai manufacturers, with the full-year PMI averaging 49.5. The coming year may yet prove equally difficult, with some survey respondents highlighting that domestic political events have made clients more cautious with their spending.

That said, domestic woes may be offset by improved external conditions. If recent improvements in the global economy, led by developed economies, continue in 2017, demand for Thailand's manufactured goods may strengthen in coming months.