Italy in focus ahead of referendum

After its poor track record of predicting election results in recent months, the market is taking no chances with regards to Italy's upcoming referendum as both equities and credit investors are actively seeking protection heading into Sunday's vote. While the direct impact of a "no" vote is likely to be more symbolic than immediately felt, the market is bracing for a move of a similar magnitude to that seen around the Brexit referendum as Italy's CDS spread has jumped to 184bps in recent weeks, the same level registered in the immediate aftermath of the UK referendum. 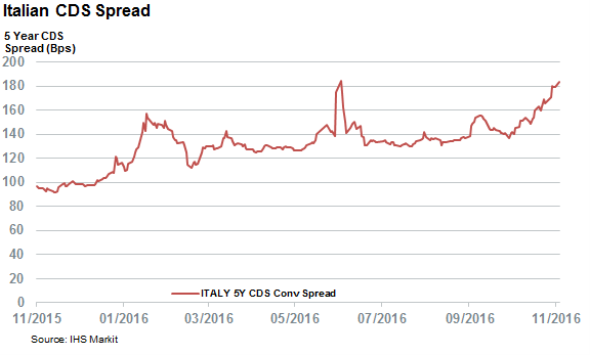 Credit markets aren't the only sector registering heightened levels of stress heading into the vote. Short sellers have been particularly active ahead of the election as average demand to borrow the Italian constituents of the Stoxx 600 index now stands at 3% of shares outstanding, over 10% higher than the demand seen 12 months ago. 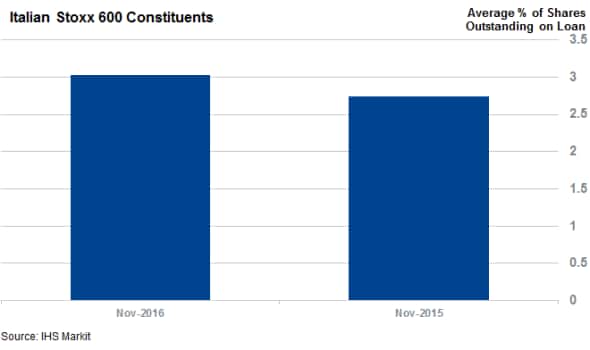 Not surprisingly, financial institutions have been in the eye of the recent short selling storm as two third of the Italian financials which feature in the Stoxx 600 have a significant 3% or more of their shares out on loan.

Banks make up the bulk of the short targets in that space with the smaller payers seeing the greatest demand to borrow. Union DI Banche Italiane (UBI) exemplifies this trend as it has 13.4% of its shares out on loan. While the number of UBI shares out on loan has fallen in the weeks immediately preceding the referendum, this has largely been driven by a supply shortage in lending program as 10 million UBI shares have left lending programs over the last four weeks. Utilization rates of UBI shares in lending programs have continued to hover in the 75% range unabated which indicates that appetite is as strong as ever despite the apparent dip in loans. 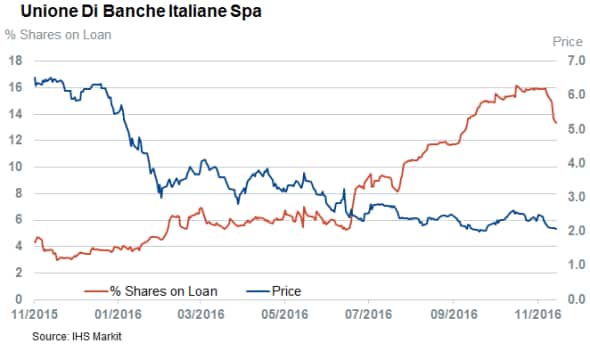 Banca Popolare Di Milano is the other high conviction short heading into the election with 9% of its shares out on loan.

Insurance firms also feature among short targets as both Unipolsai Assicurazioni and Assicurazioni Generali have more than 3% of their shares now out on loan to short sellers.

Intesa Sanpaolo, which is Italy's most valuable financial institution by a wide margin, has so far avoided the scrutiny of short sellers as less than 0.5% of its shares are now out on loan to short sellers.

Italian short sellers been vindicated as the FTSE MIB Index, whose constituents largely overlap with the Italian firms represented in the wider Stoxx 600 index, has fallen by over a quarter over the last 12 months. This means that Italian equities have the wider European equity field by 17.3% in the 12 months leading up to the referendum.

ETF investors have shown no appetite to buy the dip as Italian exposed ETFs have experienced significant outflows over each of the first three quarters of the year. These outflows have continued into Q4 although the pace of outflows has slowed somewhat since the record "720m withdrawn over Q3. These outflows, combined with the plunging equity values, means that the capital invested in Italy through ETFs has shrunk by a massive 40% since the start of the year. 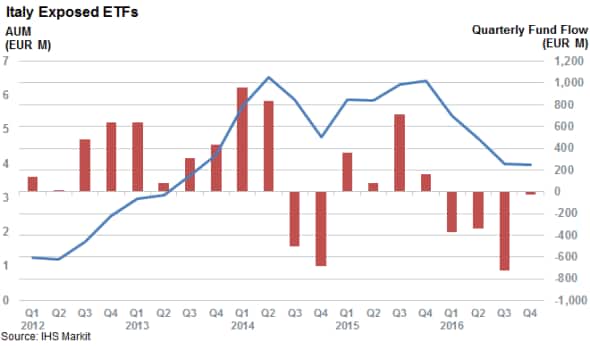