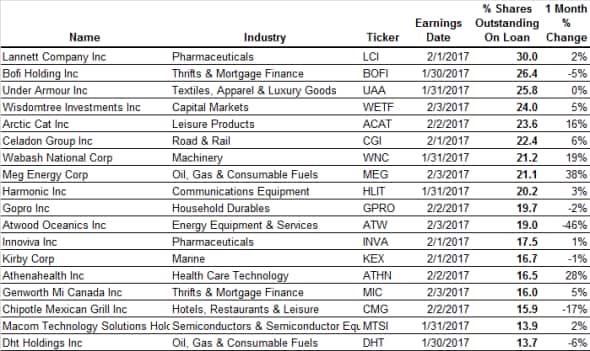 Pharmaceutical firm Lannett sees the most bearish investor sentiment heading into earnings, as just under a third of its shares are on loan to short sellers. Lannett is no stranger to short sellers as more than 10% of its shares have been out on loan for the last two years but the current demand to borrow represents a record high for the company. 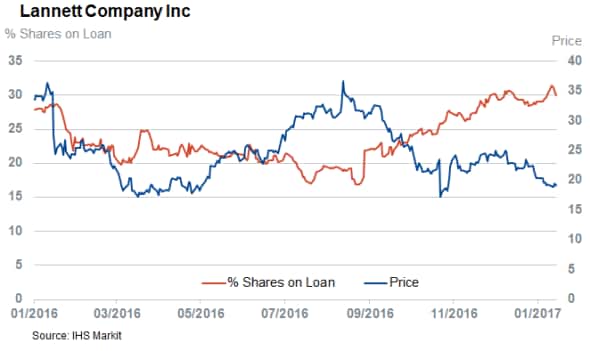 The catalyst for the most recent wave of shorting activity seems to have been the threat by the FDA to withdraw one of its generic drugs from circulation after the agency found that the drug failed to match the original drug. This move prompted short sellers to double their Lannett borrow to the current all-time high.

Fellow pharmaceutical Innoviva also sees high levels of shorting activity heading into earnings as 18% of its shares are on loan.

The most shorted of the list, sports apparel firm Under Armour, is not likely to be the target of discretionary short sellers however as the company's newly issued non-voting class C shares have started to trade at a discount. This large discount has proved tempting for arbitrageurs which have borrowed a quarter of the firm's class A shares.

The same can't be said for camera and drone maker GoPro however as which sees all-time high 20% of its shares out on loan heading into earnings. The most recent spike in shorting activity has come after the firm posted disappointing third quarter earnings and lowered expectations for its soon to be released fourth quarter results. Short sellers have taken this as a cue to stick to their already high positions despite the fact that GoPro shares were already down by over 75% from their post IPO highs.

The final household name to make the list of heavily shorted names ahead of earnings is casual eatery Chipotle which has just under 16% of its shares on loan to short sellers. While still elevated, the current demand to borrow Chipotle shares is down significantly from the highs seen last year as the firm was gripped by a slew of high profile food poisoning incidents which made the firm a high conviction short. 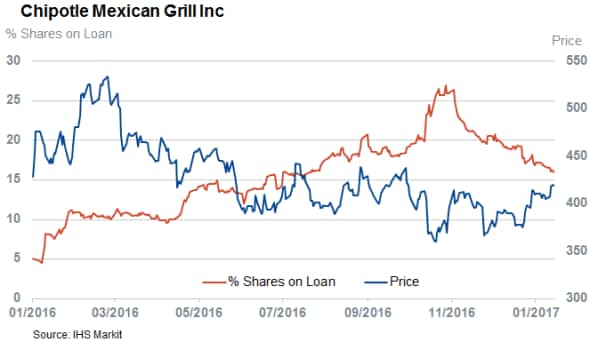 Chipotle's recent covering pales in comparison to that seen in offshore drilling rig operator Atwood Oceanics however. The recent stability in oil prices has seen investors warm to Atwood's once down and out stock and demand to borrow has nearly halved in the last month as short sellers returned loans made a a massive 17% of all shares outstanding.

UK online grocer Ocado is the most shorted European company announcing earnings this week as 19% of its shares are on loan to short sellers. While short sellers have by and large been covering their positions in UK grocers after the sector posted some pretty encouraging trading numbers over the crucial Christmas trading period, Ocado's short interest has remained stubbornly high as investors wonder whether the company can carve a niche in the already crowded UK grocery market. These doubts means that the current demand to borrow Ocado shares now stands within 10% of the all-time highs posted in the opening quarter of last year. 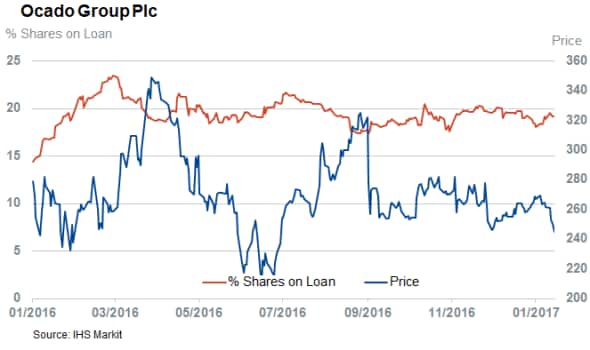 Luxury watch firm Swatch Group has benefited from a brighter outlook in the luxury sector after its peer Richemont posted some better than expected earnings. The improving market sentiment has seen short sellers close out nearly half of their Swatch short positions in the last month as its shares rallied by over 40% from the lows set last year. 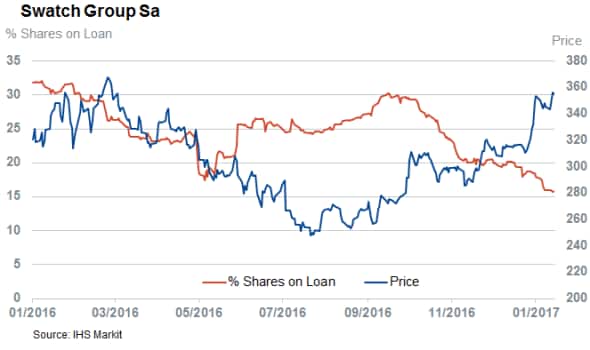 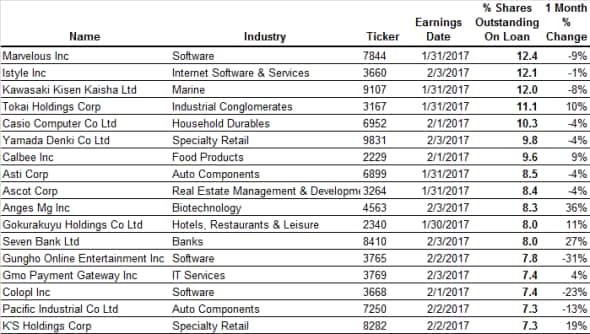 Japanese firms make up the totality of the 20 most shorted Apac companies announcing earnings, with short sellers targeting tech names in particular. This affinity for tech names is led by social media game developer Marvelous which has 12.4% of its shares out on loan.

Casio computer also makes the heavily shorted list although short sellers are most likely active in the firm's stock owing to the convertible bonds it has outstanding.

Shipping firm Kawasaki Kisen Kaisha is the most shorted non technology name as 12% of its shares are out on loan to short sellers. 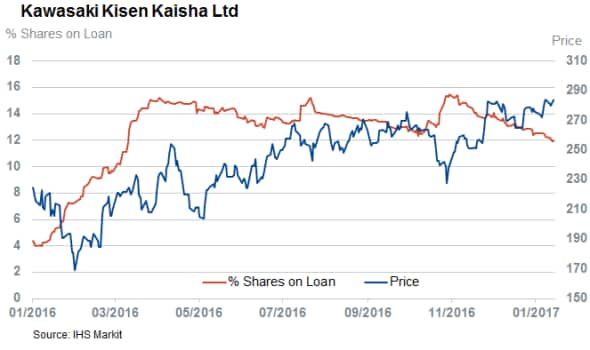 Our recent European corporate actions webinar is now available to watch on demand. Request access now to listen to… https://t.co/y9uXQPbU5j

Did you miss our recent North American corporate actions webinar? Watch the on-demand version to hear our panel of… https://t.co/6SJEjSTmlb