ExxonMobil beat earnings expectation for the first quarter today in a week which saw the oil giant lose its coveted AAA credit rating.

Both revenue and earnings came in higher than expected and an increase in dividend was enough to assure a positive market reaction. Earlier this week, ExxonMobil lost its status as an AAA rated lender when S&P decided to downgrade the credit one notch to AA, citing future debt headwinds as a consequence of today's low oil price environment. 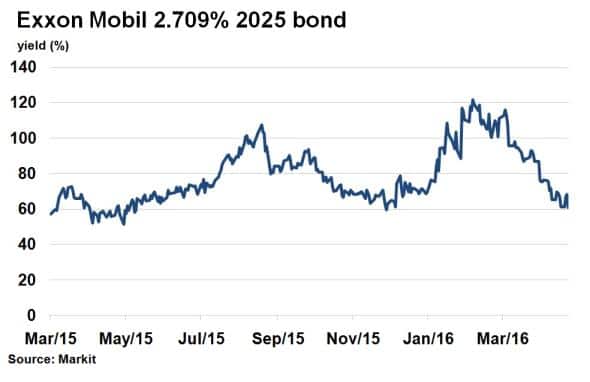 ExxonMobil's long term bonds have however continued to strengthen. Its 2.709% coupon bond maturing in 2025 has seen its spread over treasuries (a measure of risk) fall to 61bps, from 121bps in mid February, according to Markit's bond pricing service. In comparison AAA dollar denominated corporate bonds, as represented by the iBoxx $ Corporates AAA index, currently trade 30bps wider. Bar endowment funds, the only remaining dollar corporate bond issuers with an AAA rating are Microsoft and Johnson & Johnson.

After a terrible second half last year, positive sentiment in emerging markets has roared back in 2016. Including rallying in relief, a number of other factors have played a key part in the renewed positivity in the region. The accent of the US dollar has stalled, giving battered EM currencies some breathing space. Commodity prices have also got stronger over the past two months, helped by diminishing worries around China's economy. This helped ease the fiscal situation in major EM commodity exporters such as Malaysia, Russia and Nigeria. Political risk has also waned in counties such as Brazil. 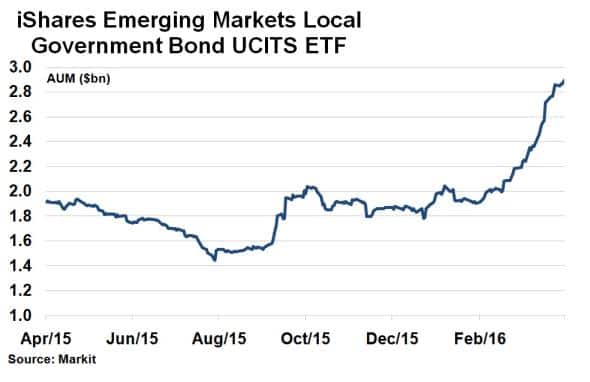 The largest emerging market ETF, the iShares Emerging Markets Local Government Bond ETF, has seen its assets under management (AUM) grow from $2bn in mid-March to nearly $3bn, according to Markit's ETP service. It has been one of the best performing fixed income ETFs so far this year, returning 14.9% on a total return basis.

Bank of Japan Governor Haruhiko Kuroda decided against injecting fresh monetary stimulus into markets this week, despite lagging inflation and growth. The inaction saw equity markets tumble in Japan and the yen weaken significantly versus the US dollar. 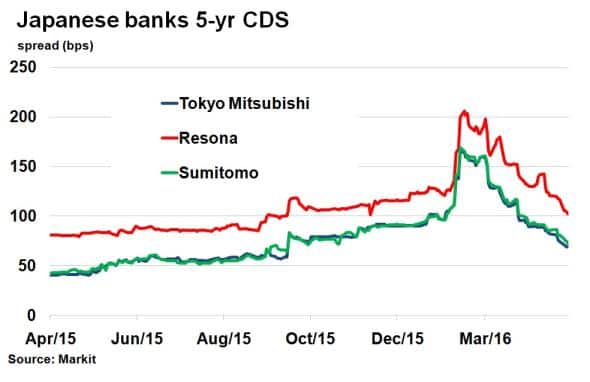 But it wasn't all bad news. Japan introduced negative interest rates earlier this year much to the displeasure of the general public and the banking sector. Credit default swap (CDS) spreads a measure of perceived credit risk, rose in tandem but have since tightened significantly as the backlash against negative rates has grown. The decision to keep interest rates as they are and not take them further into negative territory was cheered by Japanese bank credit, which saw their CDS spreads tighten further.