A stalling of US economic growth at the start of the year rules out any imminent hiking of interest rates by the Fed. The slowdown looks temporary, as a rebound from the first quarter weakness is already being signalled by forward-looking survey data, but the sustainability of any upturn is by no means convincing yet.

As such, policymakers will probably want to see how the economy performs in the second quarter before passing judgement on whether the time is right to start the process of normalising policy. That leaves September as the first realistic possibility of rates being hiked, providing of course that the economy bounces back in coming months.

According to the first estimate, gross domestic product grew at an annualised rate of just 0.2% in the first three months of the year, effectively stalling and down sharply from the 2.2% expansion recorded in the final quarter of last year.

US GDP and the Markit PMI 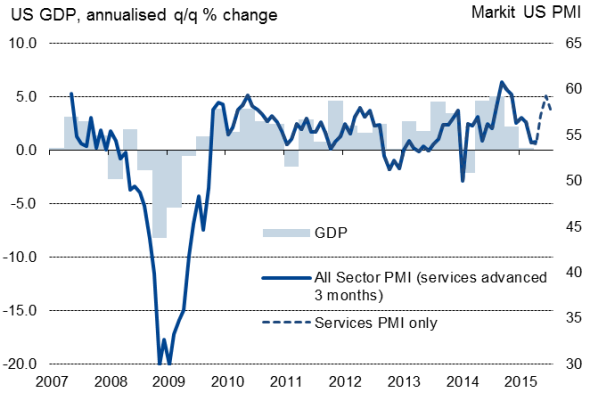 Investors have been quick to respond, with recent exchange-traded fund data pointing to the largest exodus from US equity-focused investments since 2009.

However, there is plenty of evidence to suggest that the first quarter slowdown represents a temporary blip, and that growth will rebound in the second quarter.

Some of the 'hard' official data for March are also hinting at a rebound. Retail sales rose for the first time in four months, manufacturing output edged higher for the first time since November and durable goods orders jumped 4.0%.

The survey data are likewise showing signs of growth having picked up compared to earlier in the year. Markit's US PMI surveys collectively signalled the strongest pace of economic growth for seven months in March, and preliminary 'flash' data for April signalled a robust pace of expansion being sustained at the start of the second quarter.

It's not just businesses that are brushing off slowdown fears. Consumer confidence surveys remain at, or near, post-recession highs, suggesting that consumer spending will revive after growing at the slowest pace for a year in the first quarter, providing an important boost to the economy in the second quarter.

An upturn in core inflation to a five-month high also maintains pressure on the Fed to tighten policy, but despite signs that the first quarter weakness will prove temporary, more information is surely needed for the 'data dependent' FOMC to be convinced that rates should be hiked.

The publication of second quarter GDP, due out on 30 July, is therefore likely to be one of the most important releases on the Fed's calendar, and - alongside the monthly labour market updates - will set the scene for the next policy meeting in September (there is no August FOMC meeting).