Investor appetite for US, UK and Japan wanes in favour of eurozone

Data for the first four months of 2015 (up to 27 April) show inflows into exchange-traded funds are so far running some 80% higher than a year ago, with total assets under management rising some "113bn in the year to date, according to data from Markit.

However, a deeper dive into the data reveals some major shifts in investor sentiment between the world's main economies. Most notably, April has seen a continuation of a trend of improving appetite for exposure to the eurozone, and its periphery in particular, with sentiment shifting away from US and UK equities. The data also indicate reduced appetite for exposure to Japan amid renewed signs of economic trouble. 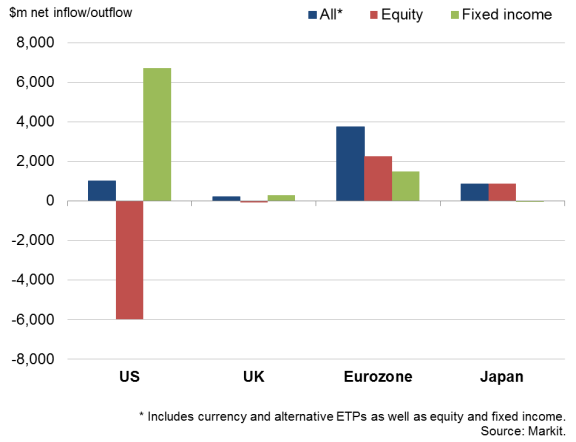 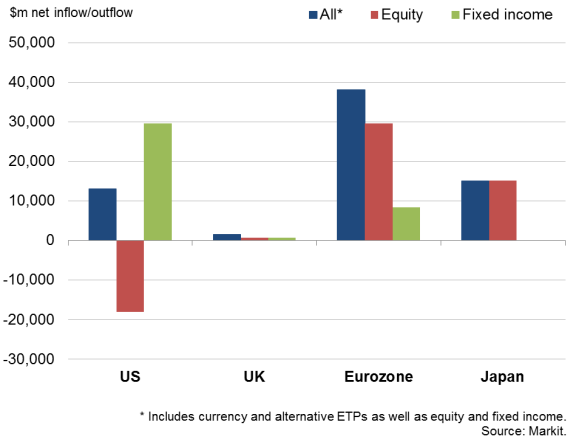 After a record first quarter, eurozone-exposed ETFs have seen further net inflows of $4bn in April so far, taking the net total for the year-to-date to $38bn. The inflows indicate that investors are gambling on economic growth picking up further in the eurozone this year, with ECB stimulus widely expected to help the region build on a nascent upturn so far in 2015, especially in the 'periphery'.

It's notable that the rate of inflows slowed in April, but this appears to reflect a wariness of weak economic growth in the core euro countries rather than worries about "Grexit" or a Greek default, with investors instead focusing on recent economic data that have signalled a welcome upturn in the 'periphery'.

Flash eurozone PMI data for April signalled the second-strongest expansion for nine months in April, with growth outside of the core countries of France and Germany reaching the highest since 2007, offsetting weaker growth in both France and Germany.

These eurozone inflows are consequently starting to favour the non-core countries. ETFs tracking German and French equities, along with those that invest in Austria, the Netherlands and Finland, are on course for their first monthly net outflows of the year in April.

Another magnet for investors this year has been Japan, where the first quarter saw the largest ETF inflows since the stock market euphoria caused by the introduction of 'Abenomics' in early 2013, with a net $15bn flowing into Japan-exposed funds. However, the inflows slowed to $0.9bn in April, the weakest since September of last year, as worries emerged that the huge stimulus programme is proving ineffective. Recent survey data point to a renewed downturn, calling into question the Bank of Japan's latest assessment of the economy enjoying a "moderate recovery trend" after it sank back into recession last year following the sales tax hike.

In the UK, ETF flows have been volatile, in part reflecting uncertainty over the economy's health and the resulting policy picture. After a strong start to the year, equity ETFs exposed to the UK are on course for a second consecutive monthly outflow in April. Although fixed-income funds continue to attract investors, UK-exposed ETFs have seen net inflows of just $1.5bn so far this year.

With the next move in UK policy likely to be one of tightening, and worries growing about the general election result, investors have less to get excited about in terms of UK corporate performance, especially after UK economic growth faltered in the first quarter, halving from 0.6% at the end of last year to 0.3%, its weakest since 2012.

US-exposed ETF inflows have meanwhile been on a downward trend in recent months, with equity funds seeing especially poor investor interest. Although US- exposed ETFs have seen net inflows of $13bn so far this year, some $18bn has flowed out of equity funds, including a $6bn outflow so far in April. This represents the largest outpouring of investor exposure to US equities since 2009.

The outflows appear to reflect investor concerns about the impact of the strengthening US dollar on corporate earnings as well as the prospect of the Fed hiking interest rates later this year, all set in the context of already-high stock market indices. 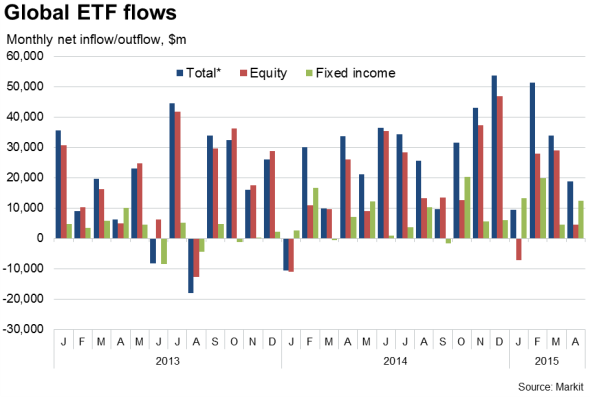