There is growing evidence to suggest that policymakers were deterred from raising interest rates earlier in the year due to misleading signals from official data.

It remains too early to tell if this will represent another example of policy being set incorrectly due to data quality issues, but does raise further question marks over the emphasis and reliance that policymakers place on official data, and highlights the role that accurate PMI-based business survey evidence can play in the policy-making process. 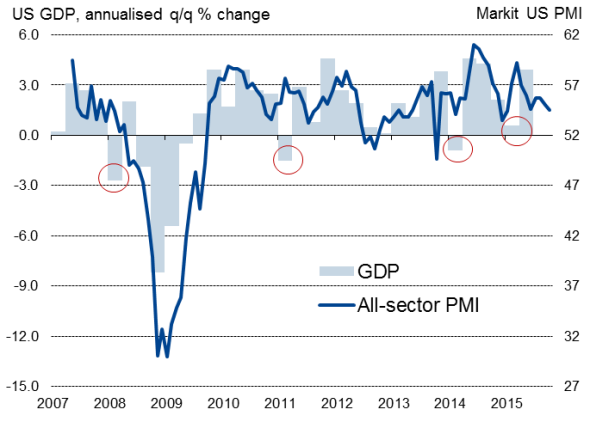 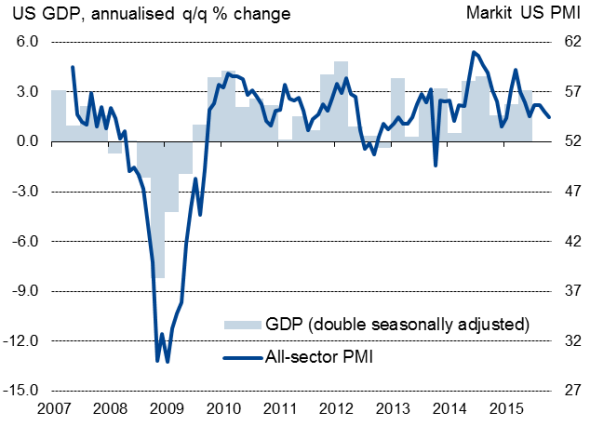 A feature of the official GDP data in recent years has been a tendency for first quarter growth to appear anomalous to that seen in surrounding quarters. In 2008, 2011 and 2014, for example, GDP contracted in Q1, contrasting with robust growth seen in the preceding and following quarters. More recently, growth slowed sharply in the first quarter of 2015, supposedly attributable to extreme weather. Past research, including that conducted by the San Francisco Federal Reserve, has suggested that this may be due to the official data from the Bureau of Economic Analysis (BEA) retaining some residual seasonality.

A statistical procedure normally removes fluctuations in GDP data which tend to be caused by usual factors for the time of year, such as holidays and weather. However, it appears that, in the case of the US, the procedure has failed to make a full adjustment for usual seasonal influences in recent years (for reasons that are not yet fully understood). This view is supported by running the supposedly seasonally adjusted data through the same statistics package (X12-ARIMA) again.

The end result is a smoother data series which demonstrates less volatility at the start of the year. In particular, the new ‘double’ seasonally adjusted data series no longer shows contractions of GDP in 2011 and 2014, and GDP in the first quarter of 2015 is now estimated to have grown at a 2.2% annualised rate instead of a mere 0.6%.

The newly seasonally adjusted GDP data are also more in line with the business surveys. Markit’s PMI data, based on surveys of both manufacturing and services, have often contrasted with the GDP data by indicating stronger starts to the year than the official numbers. Markit’s PMI, for example, averaged 56.9 in the first quarter of 2015, signalling robust economic growth of 2.5%.

The correlation between Markit’s composite PMI and GDP in fact rises from 80% to 87% if the GDP data are ‘double’ seasonally adjusted (with the PMI acting with a one-month lead on the GDP numbers).

The suggestion that official GDP has regularly understated economic growth at the start of the year could have important implications for monetary policy. The sharp slowdown in the first quarter of 2015 (an initially reported 0.2%, from which the official data have since been revised to show 0.6%) was widely seen as an appropriate reason for the Fed to delay hiking interest rates until a clearer picture of the economy came into focus. By the time the economy’s resilience was shown, with GDP rising sharply in the second quarter of 2015, there were already other excuses becoming apparent for rates not to rise, namely financial market volatility stemming from China’s stock market slump and worries about China’s slowing economy.

We can only speculate whether the Fed would have raised rates if 2015 had seen a strong start, and whether such a hike would have been appropriate. For example, it’s still not clear that the economy has recovered sufficiently from the recession to withstand higher interest rates. Wage growth in particular remains frustratingly weak, hovering around 2%, and the Fed’s favoured measure of inflation has shown few signs of lifting above 1%. Employment growth has also eased, hinting at more risk aversion creeping into the economy. However, the question marks raised over the quality of the GDP data suggest that recent years may have seen yet another example of policymaking being blown off course by misleading official data.

Our PMI-derived GDP estimates are based on a regression using double seasonally adjusted GDP data as the dependent variable and PMI data as the sole explanatory variable. The adjusted r-squared from the regression is 0.70 (with a SE of 1.5).

To convert PMI readings to annualised GDP proxies use the following calculation: 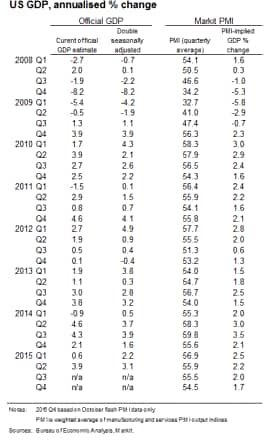