Recovery Go! Investors try to catch them all

- Investors received an $8bn payout in June from Countrywide

Recovery Go! has been the cheer heard lately from many Non-Agency RMBS market participants lately. Unlike the immensely successful Pokemon GO! game, these players are more interested in trying to catch the tidal wave of recoveries from the recent Countrywide financed rep and warrant settlement. This litigation is currently the largest in the market to date and may stand to be the largest ever. The payment of roughly $8bn in claims was processed in June by the trustees of 512 RMBS deals. The legal action originally involved 530 deals but 18 are under review as the priority of recovery payments is still being deliberated by bond holders.

The roughly $15bn of legal payments progressing through the courts looks set to draw a line after nearly a decade of legal wrangling. This has pitted private label (Non-Agency) RMBS-issuing banks, including those which were rolled up into new parent firms, against investors who claimed they were misled into buying risky mortgage backed securities. The various plaintiffs argued that this breached the representation and warrants promised by the originators and ultimately led to large losses and the collapse of the private label securitization market.

The June payment of the Countrywide lawsuit brought about the largest external cash infusion in to the Non-Agency RMBS market. The cash was distributed via multiple deal mechanisms such as principal pay down, write down reimbursements and even the reanimation of bonds that have been fully written down. The table below shows the reanimation of 12667GUT8 (CWALT 2005-29CB A7), an originally rated AAA bond that lost 75% of its original balance and has been fully written down (zero balance) since June 2015. The other three bonds experienced increases in their credit enhancement (CE%), which acts as a cushion against future collateral losses, along with the reduction of any current accumulated writedowns in the form of principal payments.

The distribution of payments has allowed for defunct bonds to come back to life as so-called "zombie bonds", meaning they were once considered inactive with zero balance by investors but now have a balance. Existing bonds have benefited from recoveries in accumulated writedowns, while others have rebuilt or improved their credit enhancement levels. The influx of these payments has led to increased investor demand and attention around the Countrywide shelf of securities in particular. Using Markit's Parsing service has seen BWIC (Bids Wanted In Competition) and Offer volumes have increase significantly since the June 2016 payment.

The same demand has not been seen in the other large scale litigations. Demand and activity for JP Morgan and Citibank-backed settlement bonds were not affected by the recent surge in Countrywide activity. Many believe the US courts will next clear JP Morgan's $4.5bn settlement, while Citibank's $1.1bn settlement is still considered by investors to be outstanding for much longer.

Markit's Securitized Pricing history, it is evident that the potential for a recovery has had a material impact on the price of the bonds as the future cashflows help boost the value of the securities. Earlier in the year investors became more sceptical on the potential for payouts from litigation as persistent appeals and differing interpretations of payout structures were argued in the courts, causing further delays in recovery payments. This is exhibited by the dip in prices for recovery eligible bonds towards the end of the first quarter 2016. Prices did recover as the Countrywide news spread through the market. 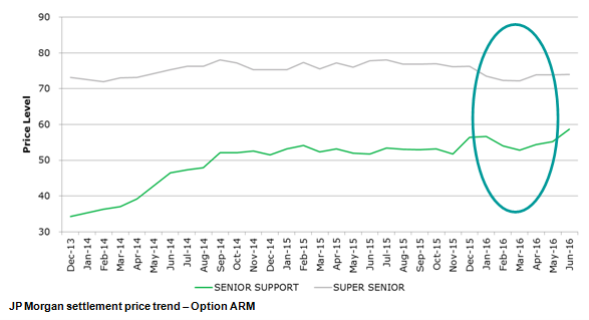 There is still controversy and uncertainty around the remaining 18 Countrywide recovery deals that have not paid. We believe that the potential for more large scale litigations is minor. The bulk of the impacted bonds were issued between 2005 and 2007, putting them far outside most statute of limitations laws.

The years since the mortgage crisis (2008+) resulted in anaemic issuance and heavy oversight of all private label mortgage securitizations. Once multi-billion dollar market, the yearly pace of issuance has shrunk from its size to only $600m now, yet the appetite from investors and participants has not fully eroded. The influx in recovery payments from current and pending lawsuits is viewed positively by market participants as they believe that most of the cash will be reinvested back in to the Non-Agency RMBS market. Government mortgage assistance programs along with large scale mortgage modifications contributed to increasing confidence in to the universe of crisis era securities. Pending litigation involving other issuers such as Lehman Brothers, UBS and Deutsche Bank is well underway and is drawing investors to catch them all.