As widely expected by financial markets, Brazil's central bank kept its benchmark 'SELIC' rate unchanged at 14.25% following its April meeting - its highest mark in almost ten years. Interest rate policy is being steered by the need to curb inflation without damaging an already-troubled economy. Consumer prices rose 0.43% in March, below February's reading of 0.90%, but contributing to a 12-month cumulative reading of 9.39% which is well above the central bank's upper limit of 6.5%. GDP is forecast to shrink at a sharper rate in 2016, after plummeting 3.8% in 2015.

For the first time in six months, all members of the monetary policy committee voted for the benchmark rate to be kept at 14.25% as concerns towards the nation's economy and inflation linger. In the previous three meetings, some members had opted for a rate hike to quell inflation. 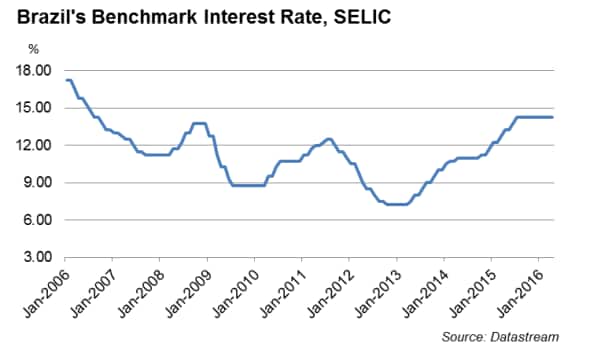 The SELIC rate was last raised in July 2015 as policy makers attempted to curb skyrocketing inflation, which was at 9.56% at the time.

Brazil's official inflation rate - IPCA Consumer Prices Index, reported by the IBGE - posted 9.39% on a 12-month cumulative basis in March (2.62% in the year-to-date). This latest reading is the lowest since June 2015, although remains well above the central bank's upper-limit target of 6.5%.

Brazil's GDP shrank 1.4% on a quarterly basis in Q4 2015, dropping at a record rate of 3.8% in the year as whole. Worryingly, PMI data suggest that the economy is yet to hit rock bottom. The Markit Composite PMI Output Index, which combines data from the manufacturing and dominant service sectors, averaged 41.7 in the first quarter of 2016, down from 43.7 in the preceding period. Severe downturns in activity have been recorded in manufacturing and services, with the latter seeing the sharpest drop in output in the history of the series during February. 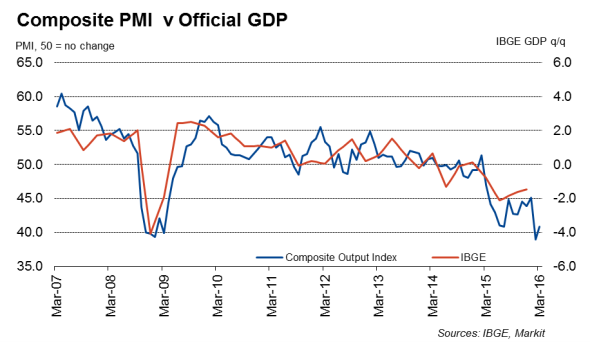 Even worse, the labour market has been severely hurt by the economic and political crises. Services employment plunged at a record pace in February as businesses attempted to slash costs as part of efforts to remain afloat.

Manufacturing and Services (with Composite) PMI data, published on May 2nd and 4th respectively, will provide further insight into the country's economic performance and likely changes in monetary policy.