The UK's impressive run of solid economic growth stuttered at the start of the year. Although most likely overstating recent economic weakness, the slowdown highlights major concerns that linger over the health of the UK economy and will inevitably result in economic forecasts being revised down. 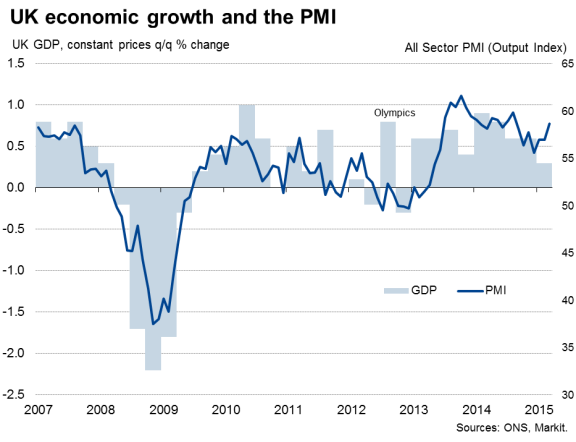 Gross domestic product grew 0.3% in the three months to March, according to the Office for National Statistics, registering the weakest pace of expansion since the end of 2012 and defying expectations of a 0.5% rise.

The latest expansion nevertheless extends the run of continuous growth that has been seen since the start of 2013, which has pushed the economy 4.0% larger than its pre-recession peak seen in the first quarter of 2008.

We should also treat the preliminary reading with caution. It is based on only partial information for the quarter, and in particular a lack of hard data for March, a month in which the Markit/CIPS PMI surveys indicated an upturn in the pace of growth.

The surveys tend to provide a good indication of the underlying pace of economic growth, and have been running at a level consistent with a 0.7% increase in GDP in recent months. The surveys therefore suggest that the first quarter GDP data are likely to be revised higher, and also that growth should bounce back in the second quarter.

Not only did PMI survey data signal a gathering of momentum in the pace of economic growth in March, registering the largest monthly jump in new business for eight months, but the mood has also improved among households. Households' worries about finances fell to the lowest seen since before the recession in April, buoyed by rising incomes, low prices and fewer concerns about interest rate hikes.

There are also signs that economic growth is reviving, albeit hesitantly, in the eurozone, which is the UK's main trading partner. Not only should this feed through to improved UK exports, but the upturn should also lead to a wider improvement in business and consumer confidence across Europe.

With the economy a key battleground in the run up to the general election, the news of a sharp slowing in growth at the start of the year leaves the coalition partners on a weak footing.

Although the sustained robust pace of growth is helping bring the deficit down, boosting tax revenues and continues to push employment to new all-time highs, the economy is by no means a picture of perfect health, and there are valid reasons to remain concerned about the longer-term outlook.

First, wage growth remains frustratingly meagre, and the drop in inflation to zero is likely to lead to weak pay bargaining in 2015.

Second, recent GDP and survey data both point to a worrying lack of business investment spending, which leaves the economy vulnerable to any downturn in consumer spending growth, something which seems likely if wage growth fails to improve significantly.

Third, productivity growth remains hugely disappointing, and will suffer further from a lack of business investment. Productivity needs to improve to help deliver higher earnings for both employees and businesses.

Fourth, the general election is likely to prove inconclusive, which could destabilise the economy through increased risk aversion amid uncertainty among businesses and households.

Fifth, the UK economy is also exposed to several external risks, notably fallout from a possible Greek default and the unknown impact of tighter monetary policy in the US, both of which have the potential to destabilise the economy over the course of the year.

The latest forecast from the Bank of England that the UK will grow by 2.9% this year therefore looks somewhat optimistic, in terms of both the poor start to the year and the assumptions that it makes. In particular, the Bank assumes wage growth will pick up and there will be no significant disruptions or shocks to the economy from the election, Greek default or global financial market stress as the US starts to normalise policy. We will be lucky to see all of these assumptions hold as the year progresses.

The detail of the GDP release showed the first quarter expansion being driven by the services economy, with construction and industry acting as drags. Service sector output rose 0.5% while industrial production fell by 0.1% (manufacturing output was up just 0.1%) and construction output slumped 1.6%.

Even within services, the data showed a worrying trend of business and financial services output growing just 0.1%, easing from 1.3% in the final quarter of last year.

The slowdown in services and the drop in construction output contrast with signs of ongoing strength in the survey data, which also point to an upturn in manufacturing growth, all of which should feed through to an upward revision to GDP in subsequently releases. 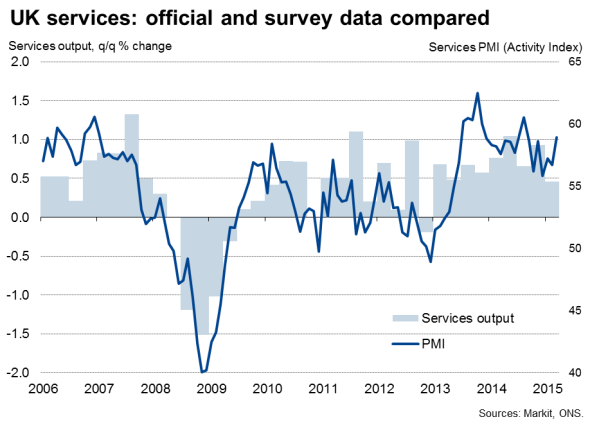 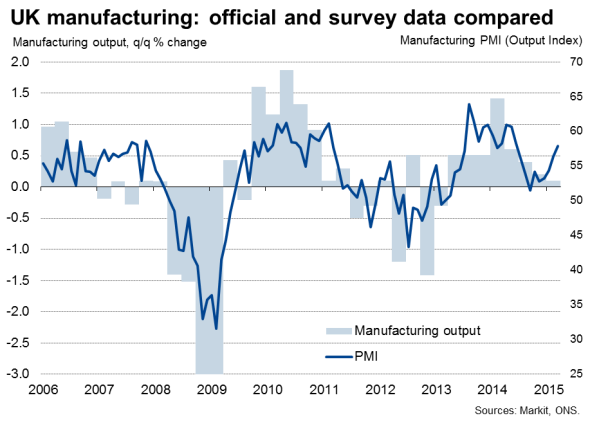 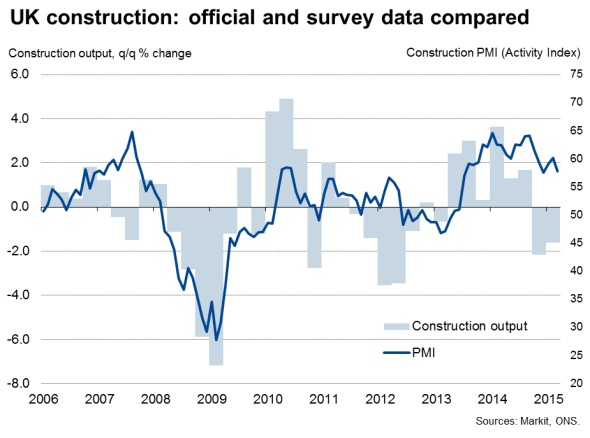