The Walking Debt: Zombie RMBS take to the Street

Litigation backed settlements have given new life to once written off US mortgage bonds.

Halloween is just around the corner and the autumn air abounds with talk of pumpkin-spiced lattes, Hocus Pocus viewings, and zombie bonds. While the former talking points are phenomena indicative of autumns come and gone, the latter has only recently come to the fore in the US residential mortgage-backed securities (RMBS) space. Zombie bonds are once-written-off securities that have seen their balances restored through the allocation of excess cash flow. While such cash flow can be generated by way of excess interest flowing back into a deal, the more prominent re-animator of these RMBS has been residual cash flow from litigation-based subsequent recoveries.

Subprime residential mortgage-backed securities originated between 2004 and 2007 are the product type most affected by litigation activity. Subprime RMBS are bonds backed by risky mortgages that have been issued to less credit-worthy borrowers (FICO score below 640) and typically carry high loan-to-value ratios. Due to the abundance of sub-standard loan origination through the mid-2000s, however, settlement proceeds have extended beyond subprime deals to higher quality US Prime and Alt-A-backed RMBS. Consequently, at least one-third of deals in the Non-Agency space issued between 2004 and 2007 are potentially eligible to receive litigation-based subsequent recoveries at some point during their lives. Our June 28th commentary Recovery Go! detailed how the recent Countrywide litigation impacted the US Non-Agency RMBS market.

As witnessed following the $8 billion June 2016 disbursement of Countrywide's litigation settlement, recovery payments typically trace an effected deal's waterfall structure - consequently "making whole" the current balances of tranches that have incurred principal write-downs by reimbursing prior losses. Any remaining proceeds, following disbursement to active securities, are used to restore the principal balances of "dead" tranches that had been fully written down and deemed unlikely to receive further cash flow. These tranches, having "returned from the dead," immediately function as part of the deal's capital structure - receiving cash flow of principal and interest and incurring losses as dictated by collateral performance, trigger adherence, and structural considerations. Beyond serving as an additional investment opportunity, zombie bonds contribute to their respective deals by bolstering the credit enhancement of active tranches senior to them. Due to the nature of recovery distribution, tranches senior to the most subordinated zombie bond have the dual benefit of loss reversal and additional support in the form of the revived bonds. 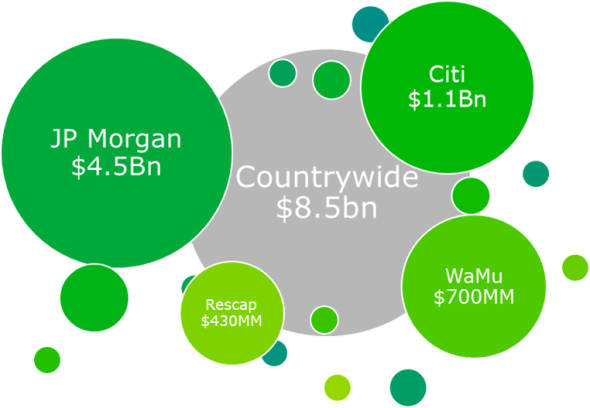 To illustrate these concepts we look to US RMBS bond CWL 2004-10 MV6 (CUSIP: 126673JY9), which saw its balance write down to zero in November 2013. The MV6 tranche is a floating rate mezzanine bond within a 2004-originated subprime Countrywide deal. Following settlement pay-out in June, the MV6 tranche was fully reimbursed for historical losses by way of a $9,611,785 principal write-up. Simultaneously, the immediately subordinate MV7 tranche (CUSIP: 126673JZ6) rose from the dead and provided the MV6 $738,728 in credit enhancement, amounting to 0.75%. As a result, the once-deceased bond that received broker dollar price indications in the low-single digits in March 2014 saw improved broker price indications in the low-teens in July 2016. Just as well, the MV5 tranche (CUSIP: 126673JX1) within the deal, which nearly had its balance written to zero prior to settlement disbursement, saw its principal balance made whole and credit enhancement rise from 0% to 9.70%. The MV5, which was offered in the mid-teens in September 2012, traded in the low-to-mid 40s in July 2016.

JP Morgan, Citigroup, Washington Mutual, and Long Beach Mortgage recoveries are among the litigations set to pay out in the not-too-distant future, and one can expect to see a horde of bonds rise from the dead and walk amongst the living again. Rather than being horrifying, however, the implication of these zombies should be a welcome site for players in the legacy space. Non-Agency RMBS saw considerable principal reinvestment following Countrywide pay-out in June 2016, resulting in material spread tightening across most vintages and product types. Further reinvestment in the space, in tandem with the influx of zombie-driven structural support and strong housing fundamentals, should prove a boon for participants in the US Non-Agency RMBS market. Those in search of Halloween frights should spend October watching season one of Stranger Things or catching up on season 7 of The Walking Dead.