The quantity of Snap shares in lending programs has fallen significantly in the last few weeks despite insatiable demand from short sellers, which has driven the fees earned from lending shares to astronomical levels

Snap’s lockup expiry can’t come soon enough for short sellers – the company’s long suffering investors who bought shares immediately following the IPO have started to sell off and restrict their shares. The number of Snap shares in lending programs peaked at 36.8 million, or 3.1% of all outstanding shares, three weeks ago. And the ensuing selloff that pushed Snap shares below their IPO price coincided with a 13% reduction in the number of shares available for short sellers. 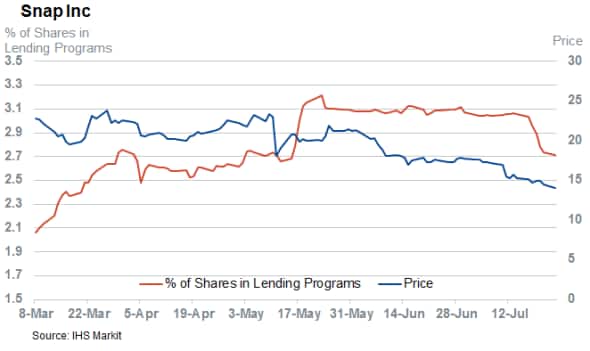 Whether or not this reduction is driven by a change of heart by Snap’s initial backers remains to be seen. But the astronomically high lending fees commanded by Snap make it quite unlikely that lenders are restricting their inventory on purely moral ground. In fact, long-only investors stand to earn roughly $1,600 daily for every $1 million of Snap shares they manage to lend at the current market rate.

The sudden reduction in the lending inventory so soon after Snap’s IPO is relatively uncommon. Facebook shares experienced a similar trend in the weeks immediately following its IPO: early investors didn’t experience any buyer’s remorse, however, as the number of Facebook shares in on loan continued to climb steadily higher in subsequent months. Snap shares have had a much tougher time convincing long-only investors to get onboard. Its lending program availability has remained flat around 3% of total shares for the last three months. 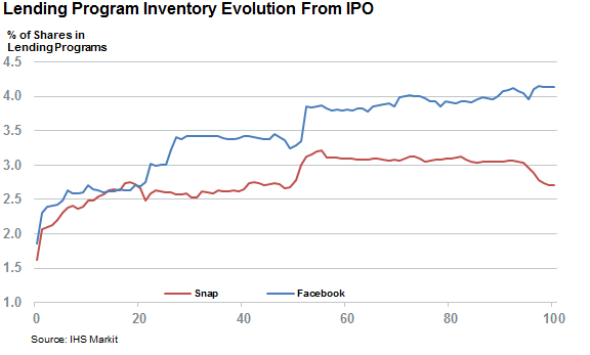 This weekend’s lockup expiry will surely see more shares trickle through to lending programs, but the fact that Snap’s early backers are starting to have second thoughts underscores the challenges the company faces since listing back in March.

Walking away from fees

The recent reduction in inventory is starting to have a material impact on the cost to borrow Snap shares. The fee needed to borrow them has climbed to levels seldom seen in the securities lending market. Snap shares are now commanding annualized fees of more than 60% in the securities lending market. This latest fee is by far and away the highest level seen since the company’s trading debut.

Short sellers not giving up

Short sellers haven’t been put off by the extortionate cost to borrow Snap shares, and lendable shares have continued to be consumed over the last few weeks. The fact that more than 95% of the short inventory is out on loan means it would be near impossible for shorts to raise their Snap exposure as there is simply no way to source shares at the moment. 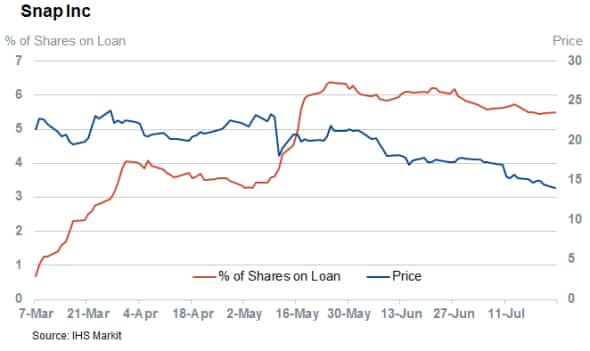 The overall short interest has declined by 10% from the highs over the last few weeks, but this is has been driven by the previously mentioned supply constraint rather than a change of heart from bearish investor.

Some private equity firms are responding to increased data complexity with technology – and saving as much as three… https://t.co/xpA76Z12Qa

We are pleased to share that @bancosantander has selected our Global Regulatory Reporting Solution for multi-jurisd… https://t.co/c7htNJ94xI

It's not too late to join our webinar tomorrow on digital transformation in private debt hosted by @AltAssets Priva… https://t.co/eYfA4tZKb9

Listen to our latest podcast interview with Tyson Smith and Leslie Skolnekovich from @TecumCapital where they discu… https://t.co/5F84jOEER4